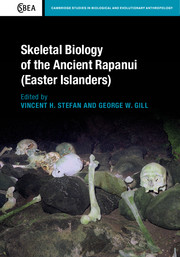 Rapanui art, especially carvings in stone and wood, has been the subject of numerous iconographic analyses. Not as well studied, however, are embellished human bones from Rapa Nui, particularly crania with incised or painted designs. While Rapanui scholars have known of these modified crania for over a century, there has been limited awareness of their number and variety due to the lack of comprehensive documentation. Less than 20 examples have been identified in the literature (Aliaga, 1983; Ault, 1922; Giannoni, 1993; Knoche, 1914; Métraux, 1940; Murrill, 1965; Poussart, 2010; Routledge, 1919; Thomson, 1891); yet, in connection with our study of late prehistoric and early post-contact human remains from Rapa Nui, more than 50 modified crania were noted in the collections of 13 institutions, prompting a more systematic study of this underreported art form. The objectives of this analysis are to synthesize available information related to acquisition history and recovery context, to present a demographic analysis of these modified crania to assess frequency of occurrence by age and sex, and to illustrate representative design motifs.

The modified crania dataset was compiled while documenting pathology in Rapanui human skeletal remains in 18 museum and university collections in Europe, North and South America, and on Rapa Nui (Owsley et al., this volume). Data collection included assigning age and sex to each individual following standard osteological methods (Buikstra and Ubelaker, 1994; Owsley and Jantz, 1989) and tracking bone representation and the completeness of each skeleton through computerized inventories. For each modified cranium the design was measured, replicated in detailed drawings noting the number and depth of individual incisions, and photographed when possible. The location of the design on the cranium was recorded, along with observations related to its production, such as whether the design appeared old as opposed to creation immediately prior to acquisition by a collector.

Fifty-three modified crania were documented in this extensive survey. Table 14.1 provides background information for these cases including the curating repository, the name of the collector or donor, year and means of acquisition, the number of modified crania procured, and available provenience information.