Home
The Experience of Education in Anglo-Saxon Literature

The Experience of Education in Anglo-Saxon Literature 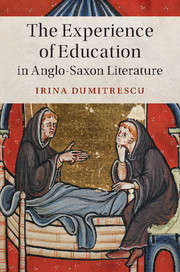 Anglo-Saxons valued education yet understood how precarious it could be, alternately bolstered and undermined by fear, desire, and memory. They praised their teachers in official writing, but composed and translated scenes of instruction that revealed the emotional and cognitive complexity of learning. Irina Dumitrescu explores how early medieval writers used fictional representations of education to explore the relationship between teacher and student. These texts hint at the challenges of teaching and learning: curiosity, pride, forgetfulness, inattention, and despair. Still, these difficulties are understood to be part of the dynamic process of pedagogy, not simply a sign of its failure. The book demonstrates the enduring concern of Anglo-Saxon authors with learning throughout Old English and Latin poems, hagiographies, histories, and schoolbooks.

'The Experience of Education in Anglo-Saxon Literature does full justice to the Anglo-Saxon interest in pedagogy and the complexity of their attitudes to it. It is also beautifully written, peppered with deft turns of phrase … Dumitrescu has produced a hugely enjoyable, informative, and thought-provoking monograph, which will be of interest to all scholars of early medieval literature.'

'Through its patient and generous attention to the literature of early medieval England, [this book] allows the emotional world of literate Anglo-Saxons to live again in its complexity and richness, and demonstrates how much can be evoked even from seemingly resistant works like grammars and translations. Elegant and stylish as well as learned, it is a lovely exemplar of genuinely humanistic scholarship.'

'Dumitrescu’s readings are meticulous and thought-provoking.'

'… modern education owes much to a period that fused antique conceptions of education with Christian ascetic practices, generating a complex amalgam of educational techniques and understandings that would, with modification, furnish the materials from which modern educational establishments and relationships were built. Irina Dumitrescu’s study furthers our understanding of this inheritance by exploring the logic of an alien but nonetheless related educational order. As it does so, it draws attention to what has become the disavowed underbelly of modern educational practice, studying the role of suffering and discomfort in Anglo-Saxon scenes of instruction.'

'This is a book that should be read and digested by all Anglo-Saxonists. It is a model of clarity and well-structured argumentation. It is deeply informed by the author’s wide reading and skill in critical interpretation, and forms a highly significant contribution to the field.'

'Irina Dumitrescu has written a learned, eloquent, and seminal book that exposes widespread pedagogical metaphors in pre-Conquest writings … Treating education as an emotional struggle, Dumitrescu observes how compositions, translations, and adaptations telegraph intricate 'fictions of teaching' that evoke an author’s didactic experience - not just his schooling … With sublime prose, persuasive evidence, and extraordinary originality, it obviously achieves the highest standard of academic excellence.'

‘… the volume … traces a remarkable and personal history of teaching and learning in Anglo-Saxon England … the topic is fully elaborated upon and justified by a successful close reading of a wide range of texts, endorsed by innumerable cross-references to other Old English and Latin works as well as to literary criticism.’

Patrizia Lendinara Source: The Journal of English and Germanic Philology

‘… the readings in this volume are rich and persuasive, and Dumitrescu brings deserved attention to some underappreciated texts. Her writing is clear and sometimes lyrical, and even with its accounts of pain and frustration, The Experience of Education is a pleasure to read.’

‘The Experience of Education is elegantly written and rigorously researched. Its new takes on much-studied texts will revitalize scholarly discussions … No doubt those studying these individual works, their respective genres, Old English and Latin literature, educational history, or monastic culture will have much to learn about learning from Dumitrescu’s monograph.’