The Roman Catholic Church in the English-Speaking World, 1829–1914 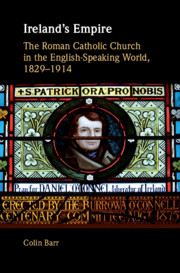 How did the Irish stay Irish? Why are Irish and Catholic still so often synonymous in the English-speaking world? Ireland's Empire is the first book to examine the complex relationship between Irish migrants and Roman Catholicism in the nineteenth century on a truly global basis. Drawing on more than 100 archives on five continents, Colin Barr traces the spread of Irish Roman Catholicism across the English-speaking world and explains how the Catholic Church became the vehicle for Irish diasporic identity in the United States, Australia, Canada, South Africa, New Zealand, Newfoundland, and India between 1829 and 1914. The world these Irish Catholic bishops, priests, nuns, and laity created endured long into the twentieth century, and its legacy is still present today.

'Based on research undertaken in over 100 archives ranging from Halifax, Nova Scotia to Cape Town, South Africa and from Rome to Maynooth, and in many cities in between, this work will fundamentally transform our understanding of the role of the Irish Catholic Church in the British Empire. An outstanding addition to the history of religion in the English-speaking world in the nineteenth century.'

'Witty, erudite and based on an astonishing grasp of Catholic archives, Ireland’s Empire is an intellectual tour de force. Filled with bathos and intrigue, Colin Barr has written a saga for the ages in this gripping history of the spiritual power of Greater Ireland in the age of empires.'

'One of the most important transnational studies of the spread of Irish Catholicism written in the last fifty years. It is a masterful examination of the growth of a network of Hiberno-Roman Catholic bishops with the power, influence and intrigue, of Ireland's Cardinal Paul Cullen at its centre. The book is a meticulous reconstruction of episcopal correspondence from dozens of ecclesiastical and civil archives spanning five continents. Challenging the existing historiography of global Irish Catholicism, this is sure to be devoured by historians across the globe.'

'This book is the fruit of immense archival labour, but nevertheless succeeds in telling a compelling, readable story.'

‘Based on research in a hundred archives on five continents, and supplemented by wide reading in secondary literature, Barr’s work is an extraordinary achievement.’

‘Barr's research in more than 100 archives in 12 countries and his knowledge of the literature (as revealed in the extensive bibliography) provide solid ground for this scholarly and insightful look at the worldwide expansion of Irish Catholicism.’