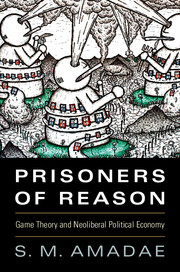 Is capitalism inherently predatory? Must there be winners and losers? Is public interest outdated and free-riding rational? Is consumer choice the same as self-determination? Must bargainers abandon the no-harm principle? Prisoners of Reason recalls that classical liberal capitalism exalted the no-harm principle. Although imperfect and exclusionary, modern liberalism recognized individual human dignity alongside individuals' responsibility to respect others. Neoliberalism, by contrast, views life as ceaseless struggle. Agents vie for scarce resources in antagonistic competition in which every individual seeks dominance. This political theory is codified in non-cooperative game theory; the neoliberal citizen and consumer is the strategic rational actor. Rational choice justifies ends irrespective of means. Money becomes the medium of all value. Solidarity and good will are invalidated. Relationships are conducted on a quid pro quo basis. However, agents can freely opt out of this cynical race to the bottom by embracing a more expansive range of coherent action.

'Based on a far more nuanced understanding of the technicalities of rational choice theory than previous critiques, Prisoners of Reason can be much more incisive in exploring the field’s entanglements between the positive and the normative. One can disagree with Amadae about where to lay responsibility for modern ideologies while still finding important food for thought about the sometimes doleful uses of social science in modern society.'

'In a deep re-thinking, S. M. Amadae shows that game-theoretic thinking, especially in the form of the Prisoner’s Dilemma, underpins not only American nuclear strategy, but neoliberalism in the domestic political economy and also multiple arguments from a different part of the political spectrum for the powerful role of institutions in international politics. Far from being value-neutral, this way of thinking has changed more than reflected much of American policy and life.'

'S. M. Amadae has a wonderfully arresting thesis concerning why winning the Cold War has proved so disappointing. Game theory’s strategic model of rational agency became the animating model of liberal society. We lost the Classical liberal ‘no-harm’ principle and gained the ‘no-holds barred’ premise of today’s neoliberalism. This is a forensic analysis of how game theory has in this way led us astray.'

'A groundbreaking study of the appalling political consequences of a disastrously impoverished and distressingly dominant understanding of human rationality.'

'S. M. Amadae has written a fascinating account that links the most important recent advances in social science with major events in political, military, and intellectual history in the twentieth century. This book adds to our understanding of economic and social theories through an in-depth analysis of people involved and institutions of that time.'

'Prisoners of Reason is an impressive, indeed encyclopedic, overview and critique of the use of game theory to analyze social and political life - from theory to policy. Even those of us friendly to game-theoretic analysis will better appreciate its limits and abuses, and the narrow view of human motivation with which it has been too-often associated.'

'Bravo! … Prisoners of Reason is a genuinely impressive achievement. It provides an arresting and persuasive account of the origins of neo-liberalism and so much more.'

'S. M. Amadae's Prisoners of Reason is a brilliant contribution. It confidently and lucidly navigates the recondite literature of game theory and nuclear strategy, and provides a revealing and persuasive analysis of the dire implications of the neoliberal model of personhood that they inform. The chapters on public choice and law and economics are masterful. The analysis is especially effective for revealing the falsehood that these ideas are a continuation of classical liberalism in James M. Buchanan's case in particular. The discussion of Buchanan and Rawls is insightful for understanding their strange early 1970s pairing, and illuminates Buchanan's will to power and reliance on force vs. Rawls's emphasis on justice. Especially powerful, though, and urgent for instructors to consider is Amadae's argument about how the pedagogy of Prisoner's Dilemma actually creates the predatory neoliberal subject. So chilling, and yet it makes perfect sense once explained. Bravissma!'

'Amadae examines the social and political consequences of neoliberal capitalism’s dominance in American policy, concluding that this model of rational choice has broken with the liberal principles of no-harm, social contract and collective action, and has narrowed our understanding of human motivation.'

'… a thoughtful examination of the fundamental assumptions on which modern society is based.'