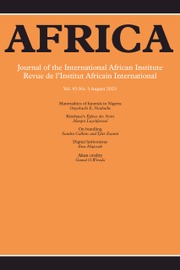 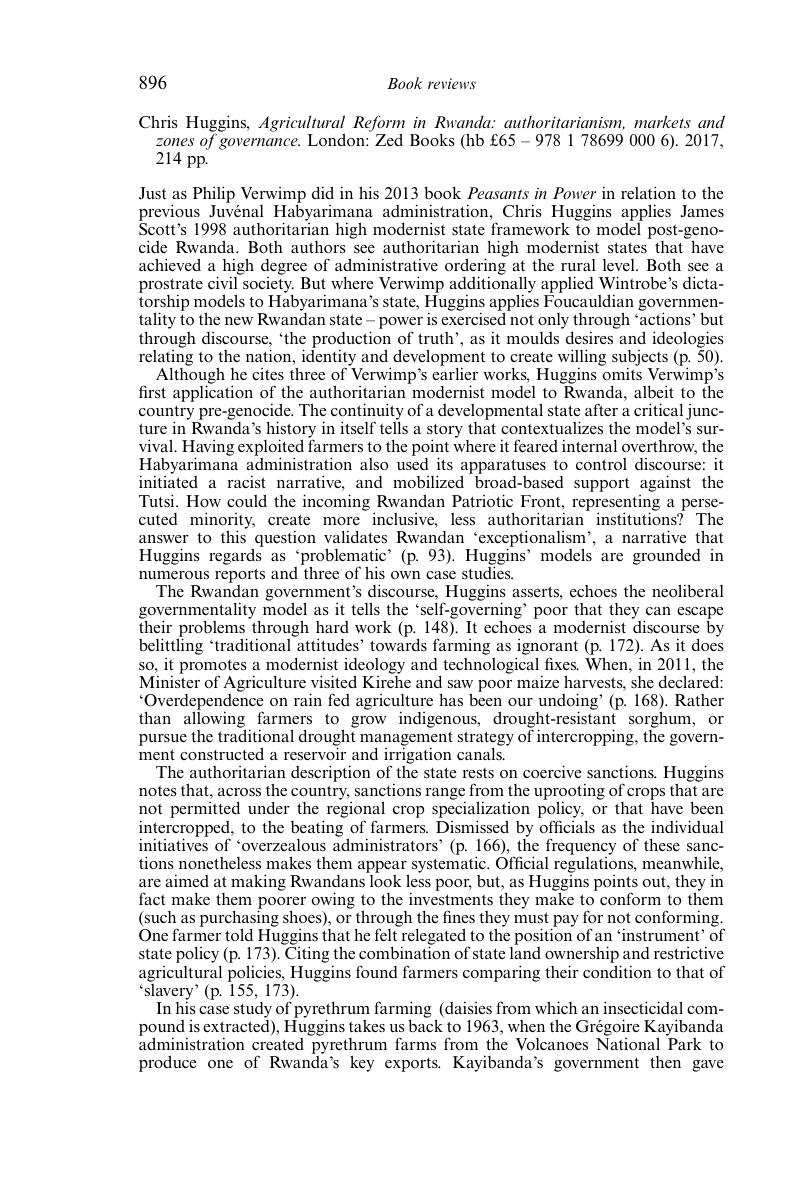 Just as Philip Verwimp did in his 2013 book Peasants in Power in relation to the previous Juvénal Habyarimana administration, Chris Huggins applies James Scott's 1998 authoritarian high modernist state framework to model post-genocide Rwanda. Both authors see authoritarian high modernist states that have achieved a high degree of administrative ordering at the rural level. Both see a prostrate civil society. But where Verwimp additionally applied Wintrobe's dictatorship models to Habyarimana's state, Huggins applies Foucauldian governmentality to the new Rwandan state – power is exercised not only through ‘actions’ but through discourse, ‘the production of truth’, as it moulds desires and ideologies relating to the nation, identity and development to create willing subjects (p. 50).

Although he cites three of Verwimp's earlier works, Huggins omits Verwimp's first application of the authoritarian modernist model to Rwanda, albeit to the country pre-genocide. The continuity of a developmental state after a critical juncture in Rwanda's history in itself tells a story that contextualizes the model's survival. Having exploited farmers to the point where it feared internal overthrow, the Habyarimana administration also used its apparatuses to control discourse: it initiated a racist narrative, and mobilized broad-based support against the Tutsi. How could the incoming Rwandan Patriotic Front, representing a persecuted minority, create more inclusive, less authoritarian institutions? The answer to this question validates Rwandan ‘exceptionalism’, a narrative that Huggins regards as ‘problematic’ (p. 93). Huggins’ models are grounded in numerous reports and three of his own case studies.

The Rwandan government's discourse, Huggins asserts, echoes the neoliberal governmentality model as it tells the ‘self-governing’ poor that they can escape their problems through hard work (p. 148). It echoes a modernist discourse by belittling ‘traditional attitudes’ towards farming as ignorant (p. 172). As it does so, it promotes a modernist ideology and technological fixes. When, in 2011, the Minister of Agriculture visited Kirehe and saw poor maize harvests, she declared: ‘Overdependence on rain fed agriculture has been our undoing’ (p. 168). Rather than allowing farmers to grow indigenous, drought-resistant sorghum, or pursue the traditional drought management strategy of intercropping, the government constructed a reservoir and irrigation canals.

The authoritarian description of the state rests on coercive sanctions. Huggins notes that, across the country, sanctions range from the uprooting of crops that are not permitted under the regional crop specialization policy, or that have been intercropped, to the beating of farmers. Dismissed by officials as the individual initiatives of ‘overzealous administrators’ (p. 166), the frequency of these sanctions nonetheless makes them appear systematic. Official regulations, meanwhile, are aimed at making Rwandans look less poor, but, as Huggins points out, they in fact make them poorer owing to the investments they make to conform to them (such as purchasing shoes), or through the fines they must pay for not conforming. One farmer told Huggins that he felt relegated to the position of an ‘instrument’ of state policy (p. 173). Citing the combination of state land ownership and restrictive agricultural policies, Huggins found farmers comparing their condition to that of ‘slavery’ (p. 155, 173).

In his case study of pyrethrum farming (daisies from which an insecticidal compound is extracted), Huggins takes us back to 1963, when the Grégoire Kayibanda administration created pyrethrum farms from the Volcanoes National Park to produce one of Rwanda's key exports. Kayibanda's government then gave farmers conditional ‘free’ leases – 40 per cent of the land would have to be used to cultivate pyrethrum. Violators would be evicted. In 2012, the state renewed this arrangement after the National Land Centre raised expectations that farmers owned the land and thus could resist the parastatal established to manage the pyrethrum industry and set prices (which, Huggins neglects to mention, insulated farmers from global price reductions). This clear conditionality was necessary because farmers preferred to grow potatoes that could feed their families and pay for school fees. Together with the mandatory purchase of amounts of fertilizer that local authorities are incentivized to foist upon farmers, the economics of farming pyrethrum do not make sense for producers.

Huggins implicates USAID and other donors in facilitating the reconfiguring of ‘rights and responsibilities associated with citizenship … to enhance processes of extraction’ (p. 156). While the US government Millennium Challenge Corporation and the Rwandan state never reached a compact due to Rwanda's declining scores on political rights indicators, USAID's funding to improve the amount of pyrethrum harvested has legitimized the disciplinary power of the pyrethrum parastatal and structural conditions of production. Meanwhile, donor staff may see their careers negatively affected if they uncover data that runs counter to homogenized ‘thin’ quantitative data collected by the government (p. 98), which may explain why the UK's DFID staff visit rural areas on average once per year, the lowest frequency anywhere in the world.

The studies compiled robustly support Huggins’ models for the Rwandan state vis-à-vis the rural populace. A more nuanced understanding may have been reached, however, had the coercion been contextualized as both the legacy of the pre-genocide state as well as an inheritance of the genocide itself.