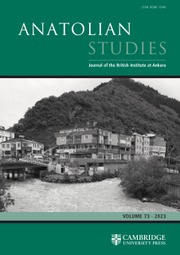 An agro-pastoral palimpsest: new insights into the historical rural economy of the Milesian peninsula from aerial and remote-sensing imagery

Examination of a number of satellite and aerial images of the Milesian peninsula has allowed the mapping of a large number of apparently ancient linear features across the landscape. These are here interpreted, for the most part, as relicts of agro-economic field systems of unknown date, but most plausibly established during the Archaic, Hellenistic or late antique periods and perhaps used for centuries after, before the economic decline of the region in the second millennium AD. While earlier survey work has noted the existence of terracing and rural divisions at certain points in the landscape, the new remote-sensing data have provided an unprecedented large-scale insight into the extent and variety of forms of division, as well as documenting the stripping of macquis overgrowth by modern farming practices, which has, on the one hand, exposed these ancient landscapes but also, on the other, poses a threat to their preservation. The extent of the linear features suggests a high degree of land use on the peninsula at certain points in the past. Further investigation of these important features has the potential to provide critical insights into the economic history of rural and urban Miletos over the last 2,000 to 5,000 years.

An agro-pastoral palimpsest: new insights into the historical rural economy of the Milesian peninsula from aerial and remote-sensing imagery
×

An agro-pastoral palimpsest: new insights into the historical rural economy of the Milesian peninsula from aerial and remote-sensing imagery
×

An agro-pastoral palimpsest: new insights into the historical rural economy of the Milesian peninsula from aerial and remote-sensing imagery
×
×