The International Journal of Animal Biosciences

Published on behalf of The animal consortium
Journal Home 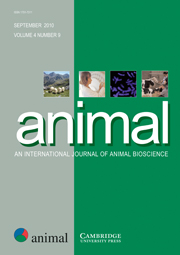 Physiology and functional biology of systems