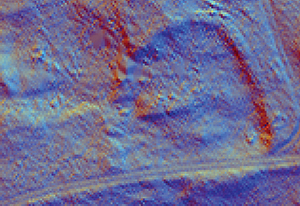 Northern Britain is one of a few areas in Western Europe over which the Roman Empire did not establish full control. In order to reassess the impact of Rome in this northernmost frontier, the new Leverhulme-funded project Beyond Walls is analysing the long-term transformation of settlement patterns in an area extending from south of Hadrian's Wall to north of the Antonine Wall. The results of a pilot study around Burnswark hillfort demonstrate the potential of such a landscape-based approach.

Introduction: Rome in the north

The impact of empires on their peripheries is a topic that continues to attract considerable attention. While traditional approaches often emphasised imperial powers and their supposedly unidirectional influences on societies located at their edges, recent research incorporating perspectives from postcolonialism, decoloniality and globalisation theory is producing more complex and nuanced understandings. Thus, work undertaken in regions such as Southeast Asia (e.g. Scott Reference Scott2009) and North America (e.g. Witgen Reference Witgen2012) has highlighted the multifaceted ways in which local communities can develop strategies to adapt to, but also to contest and escape from, centralising attempts by state powers. In Europe, one of the main examples of such interactions is represented by the frontier regions of the Roman Empire and their immediate hinterlands. Northern Britain constitutes a prime case study, since for centuries it was a fluctuating frontier area characterised by dynamic patterns of confrontation and exchange between Iron Age communities and the Roman state (Hunter Reference Hunter2007; Harding Reference Harding2017). While written sources for the period are scarce, the thousands of known native settlements and the Roman infrastructure of forts, camps and roads provide a means to explore the complexity of interactions (Figure 1). 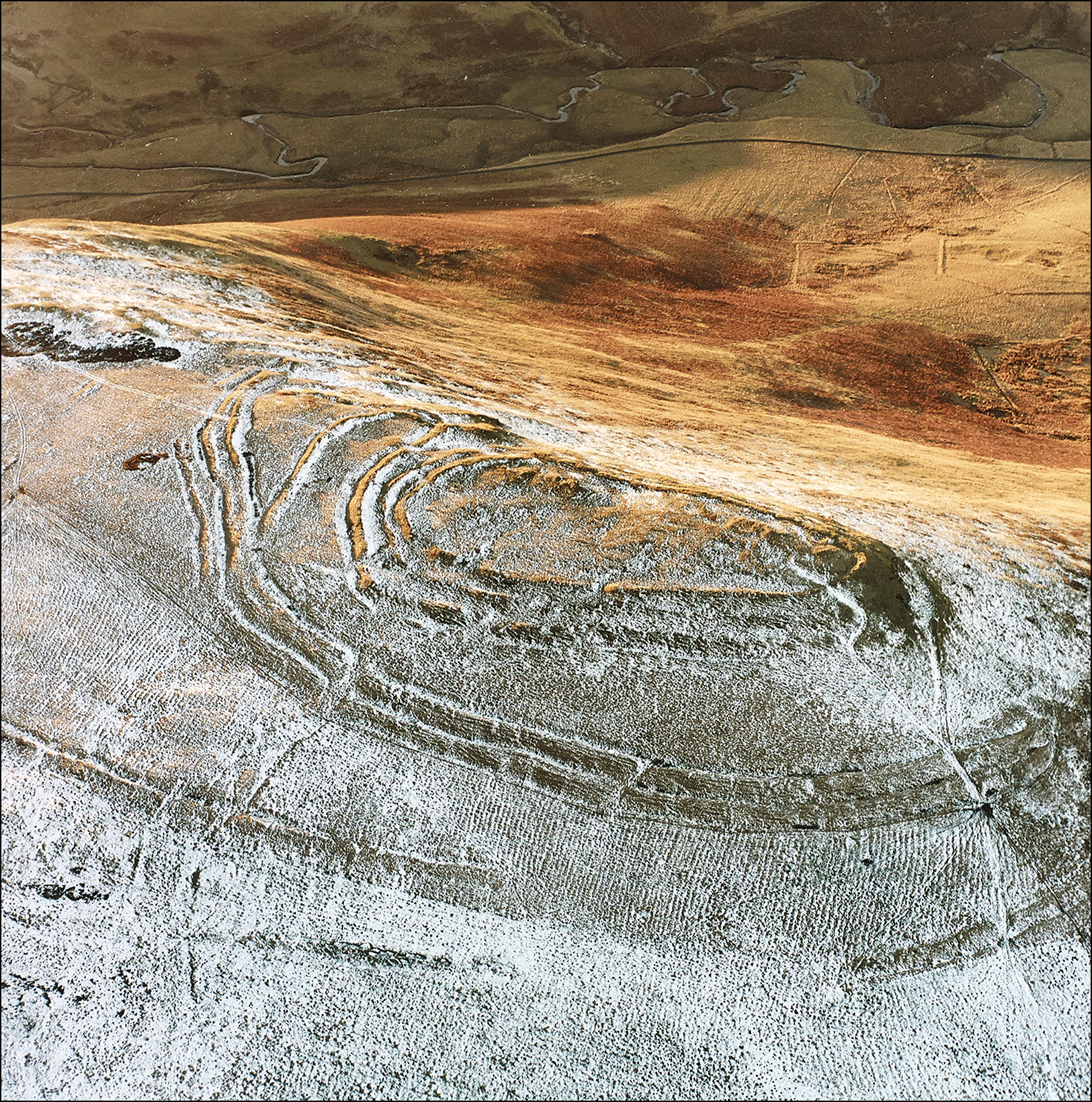 Several issues, however, have traditionally hindered our understanding of this northern frontier, including modern administrative borders, academic divides between prehistoric and Roman archaeology, and the limited chronological resolution of much of the material, particularly with regard to indigenous sites. Furthermore, many analyses have adopted a predominantly Roman perspective, focusing primarily on Hadrian's Wall, the Antonine Wall and the hundreds of Roman forts and temporary camps known in northern Britain. Although this is undoubtedly important, a holistic understanding requires paying greater attention to the indigenous evidence, both through the study of specific sites and wider landscape patterns.

In order to address these issues and re-evaluate the impact of Rome on its northernmost frontier, the new Leverhulme-funded project Beyond Walls: Reassessing Iron Age and Roman Encounters in Northern Britain (2021–2024) adopts a long-term perspective covering the period from c. 500 BC–AD 500. The project aims to examine the trends and transformations before, during and after the period of direct Roman presence in a study area that extends from approximately 40km south of Hadrian's Wall to some 40km north of the Antonine Wall. This takes a perspective beyond the lines of these two monumental UNESCO World Heritage sites that have often acted as a focus for previous research strategies. Within this large study region, which extends from northern England to the southern Scottish Highlands, the project rationalises existing survey and excavation data within a common framework. This includes reviewing published data and grey literature in national and local archives, creating a systematic database to allow large-scale comparison. Moreover, the multi-scalar approach includes rapid prospection using remote-sensing datasets to identify previously unknown sites, allowing us to interrogate gaps in evidence and assess the representativity and reliability of known settlement patterns. The scope of the project is guided by four interrelated questions:

In addition to the overarching picture, four case studies will be analysed in greater detail to develop nuanced understandings of the potential range of encounters between Iron Age populations and the Roman military (Figure 2). The case studies centre on areas along Roman roads (numbers two and three) and straddling Hadrian's Wall (number one) and the Antonine Wall (number four), taking in areas ranging from 1000km2 to 2400km2. These areas have been selected based on their relative abundance of known archaeological evidence both in terms of indigenous sites and Roman camps and infrastructure. Case study one, for example, includes information from numerous development-led projects from the last two decades around Newcastle, whereas case study two follows the line of the important Roman road of Dere Street, and incorporates key sites, such as the Roman fort at Newstead and the nearby indigenous hillfort of Eildon Hill North. 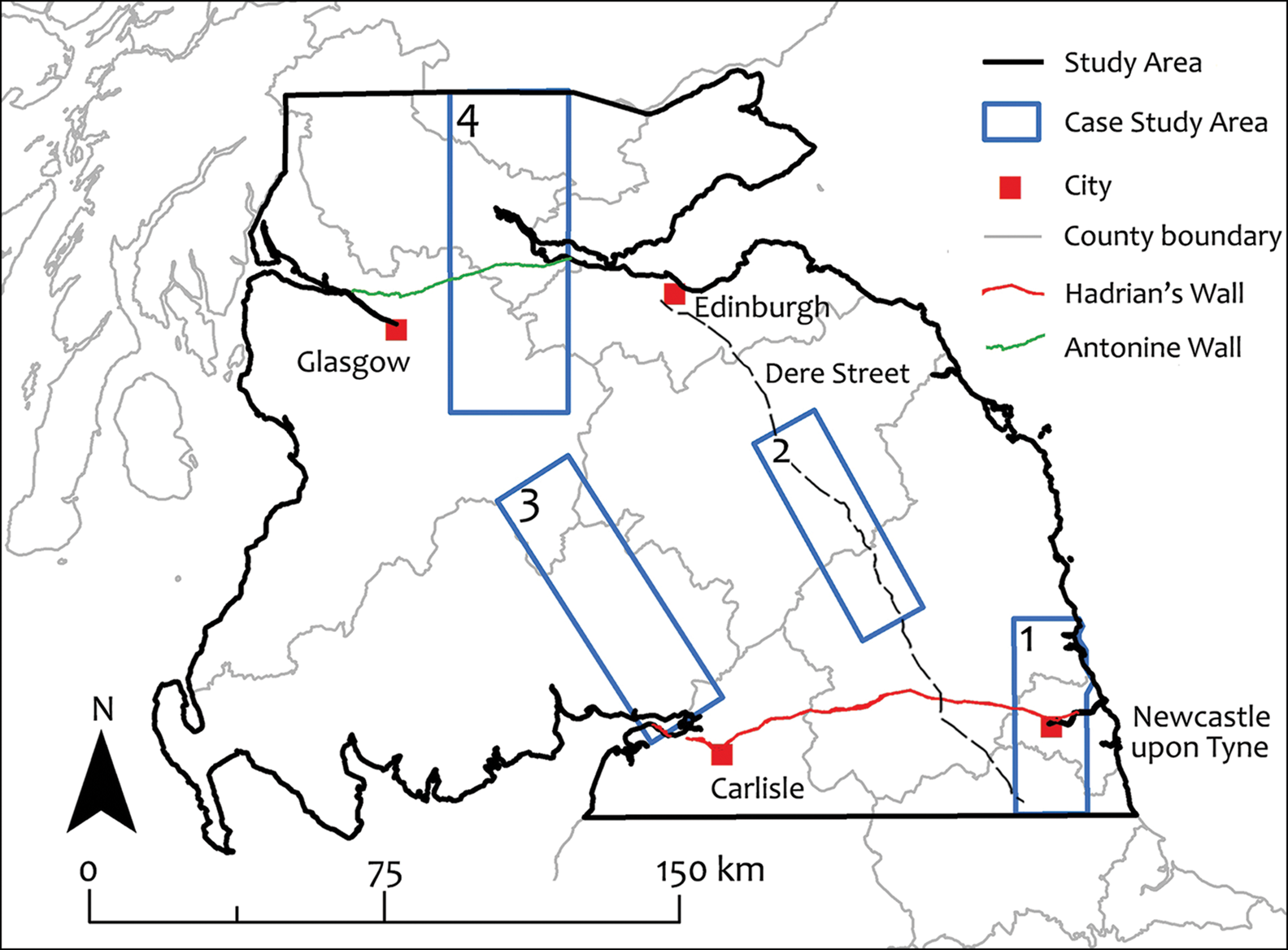 Within the four case study areas, the settlement evidence will be examined in detail. This will allow us to compare the broad patterns recognisable across the entire project area with regionally varying expressions within the four case studies. Within the latter, the work will include collation of palaeoenvironmental data to model human impact on the landscape, geophysical surveys at selected locations, and radiocarbon dating and chronological modelling to provide a unified dating methodology. The project will produce a minimum of 300 new radiocarbon dates from settlement evidence and palaeoenvironmental samples, thus creating the largest set of scientific dates generated within a single archaeological project in northern Britain (Figure 3). A crucial and innovative element is the comprehensive application of site-based and age-depth modelling. 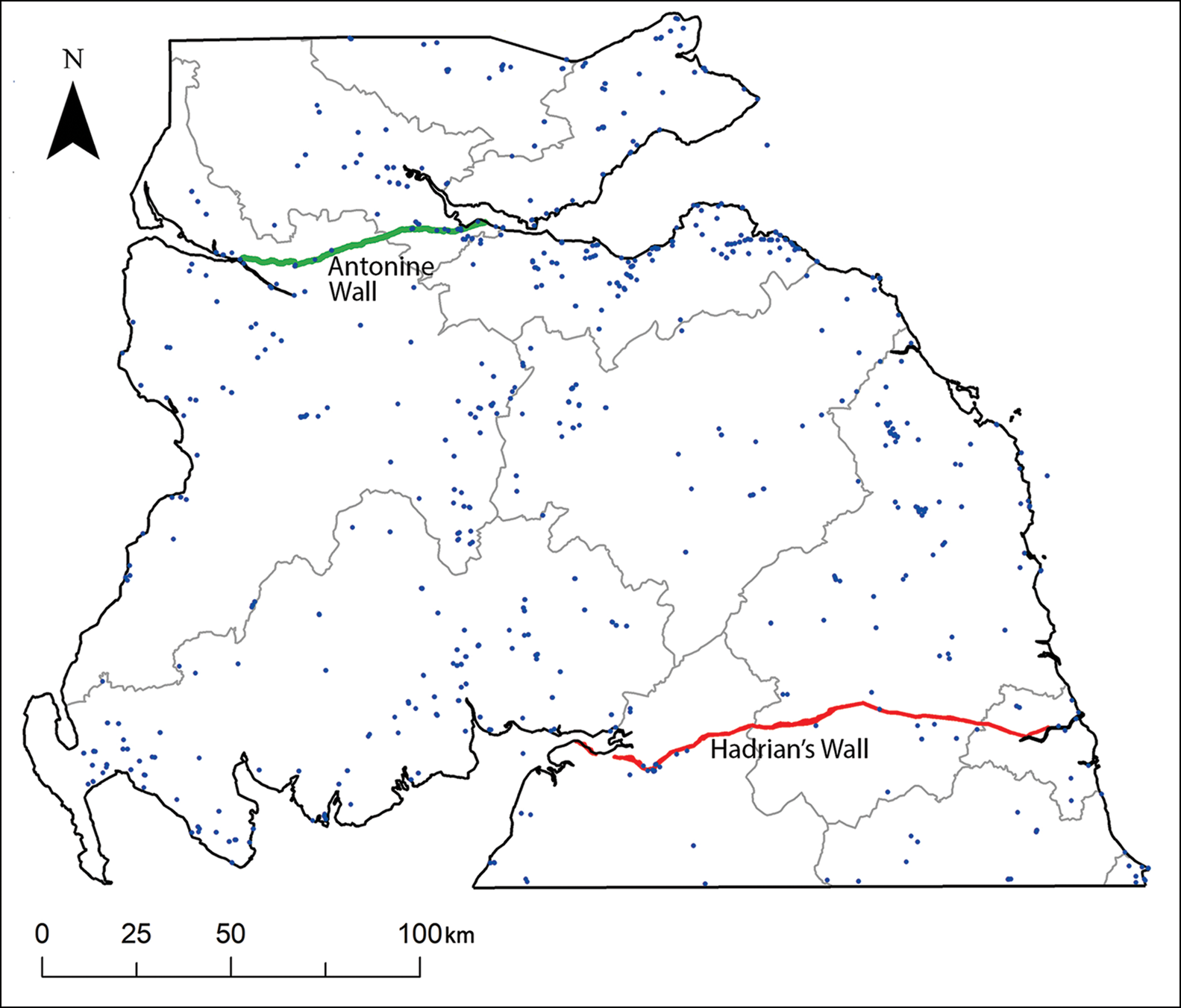 Figure 3. Distribution of radiocarbon dates from the Iron Age in northern England and southern Scotland. While this is a superficially extensive body of chronological evidence, robust Bayesian chronological models can only be developed at a small number of sites, pointing to the pressing need for further dating (figure by the authors, using source data from Historic Environment Scotland and Bevan (2017)).

As a pilot study for the Beyond Walls project, the British Academy-funded project On the Edge of Empire: Exploring Iron Age Settlement Landscapes in Southwest Scotland was carried out during 2021. This study encompassed approximately 1500km2 around the key landmark of Burnswark hillfort. While the spectacular Roman military evidence at Burnswark, including two camps and hundreds of projectiles, has received considerable attention (e.g. Reid & Nicholson Reference Reid and Nicholson2019), understanding of its wider environs remains poor. The British Academy project made systematic use of high-resolution lidar data made available by the Scottish Government to prospect for previously unknown sites and review previously known sites in a common framework. This work established a corpus of 704 definite, probable or possible Iron Age settlement locations in the study area, of which 570 were previously known sites and 134 were new discoveries (Figure 4). The latter were made despite parts of the study area being well surveyed in the past (Royal Commission on the Ancient and Historical Monuments of Scotland 1997), demonstrating the potential of lidar data to add considerably to our understandings of later prehistoric settlement patterns. This is illustrated, for example, by the discovery of two previously unknown Iron Age enclosures near Range Castle (Figure 5) and by the enclosure identified at Beattock (Figure 6). The survey work supports assessment of the broad representativity of known settlement distributions—a crucial factor in analysing the Iron Age landscape. Our assessment has expanded the corpus of sites and filled some gaps in the landscape, but at the same time confirmed that, in broad terms, the overall distribution of indigenous sites has a regularity that probably reflects Iron Age settlement patterns. Further assessment of the potential impact of the Roman presence requires detailed analysis, but the foundation to ensure a deeper understanding of the known settlement pattern has been laid within our pilot project. 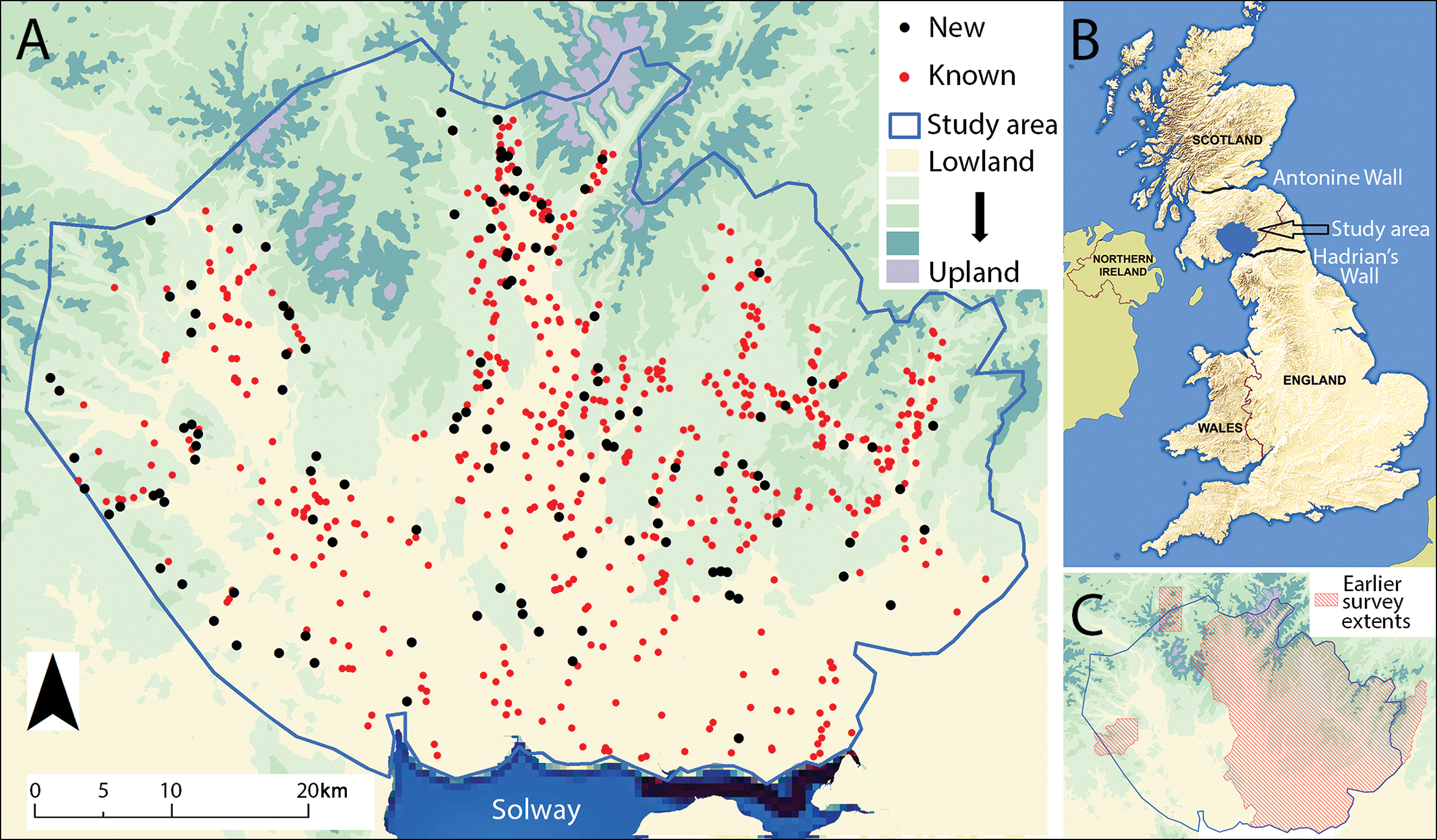 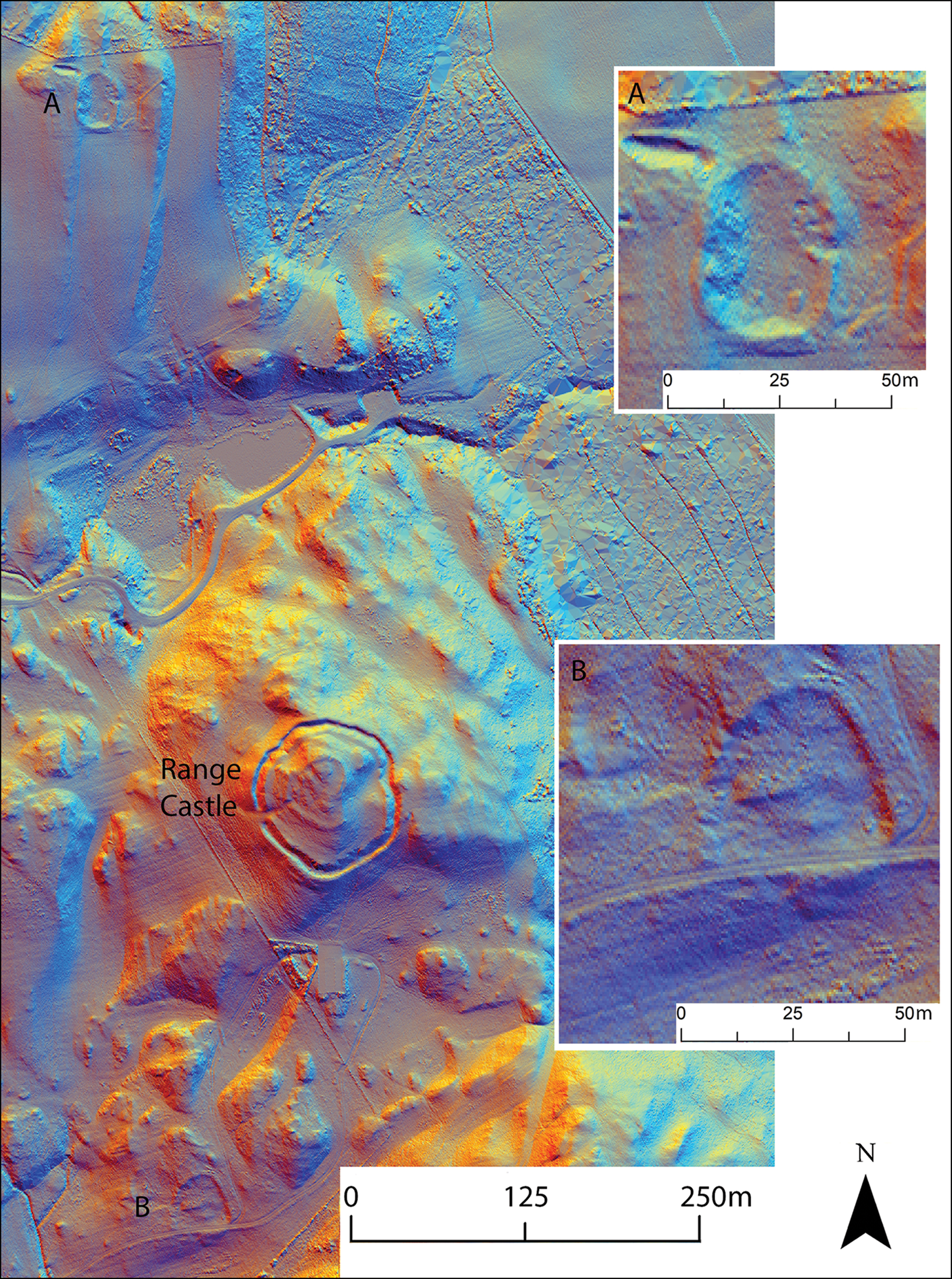 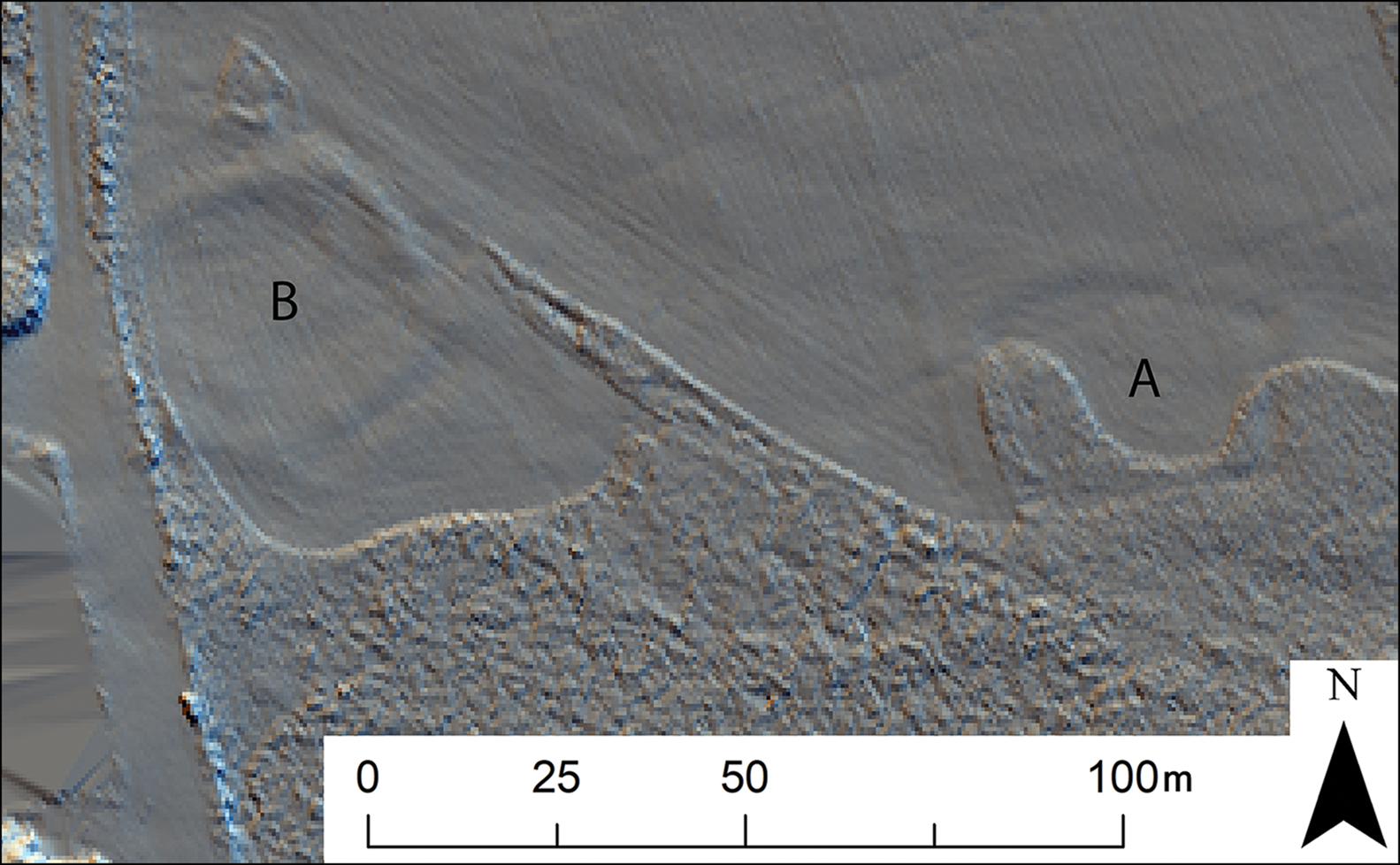 Figure 6. Lidar-derived multi-direction hillshade visualisation showing two Late Iron Age rectilinear settlement enclosures lying a short distance apart, near Beattock Station in Annandale. One (A) was discovered from the air as cropmarks by J.K. St Joseph in 1957, the second (B) by S. Halliday from lidar data in 2021 (figure by the authors; contains public sector information licensed under the Open Government Licence v3.0; lidar for Scotland Phase III DTM).

In addition, extensive geophysical survey was undertaken in September 2021 by a team from the German Archaeological Institute, under the direction of C. Rummel, with the aim of better understanding the representativity of known archaeological evidence. Centred on the sequence of Roman camps at Middlebie, 58ha of magnetometer data were collected. The results add to the information already known from aerial photographs, allowing a more detailed insight into the sequence of camps established in direct view of Burnswark hillfort. The chronology of the latter, and the associated Roman camps located directly at its foot, has also benefited from six new radiocarbon dates funded by the project, which range from the third century BC to the second century AD.

While the Beyond Walls project is still in its initial stages, we anticipate that the multi-scalar and interdisciplinary approach will allow for the integration of settlement patterns and landscape use synchronically and diachronically, drawing a more holistic picture of lifestyles and encounters across the study region. The emerging trends will be evaluated in relation to the fluctuating Roman presence in northern Britain, tracing elements of continuity and long-term developments against periods of rapid change, growth or abandonment. Finally, the conclusions reached for the project area will be set within the wider context of recent discussions about the nature of Roman imperialism and its impact on frontier societies (cf. Fernández-Götz et al. Reference Fernández-Götz, Maschek and Roymans2020; Belvedere & Bergemann Reference Belvedere and Bergemann2021), thus contributing to the wider topic of encounters at the edges of expanding imperial powers. 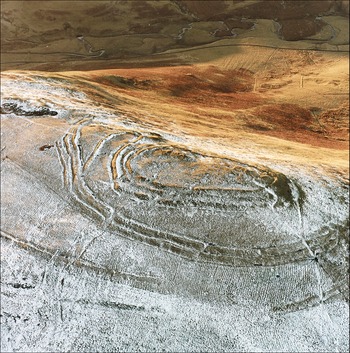 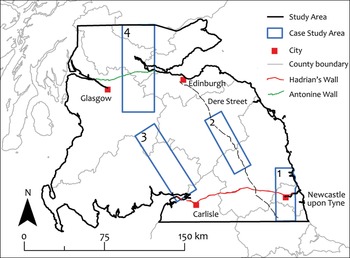 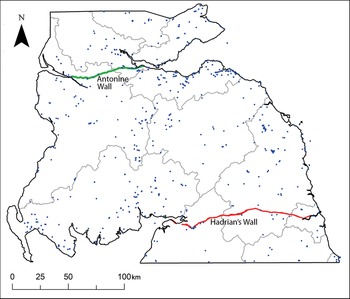 Figure 3. Distribution of radiocarbon dates from the Iron Age in northern England and southern Scotland. While this is a superficially extensive body of chronological evidence, robust Bayesian chronological models can only be developed at a small number of sites, pointing to the pressing need for further dating (figure by the authors, using source data from Historic Environment Scotland and Bevan (2017)). 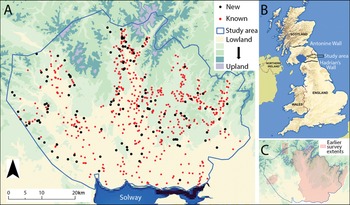 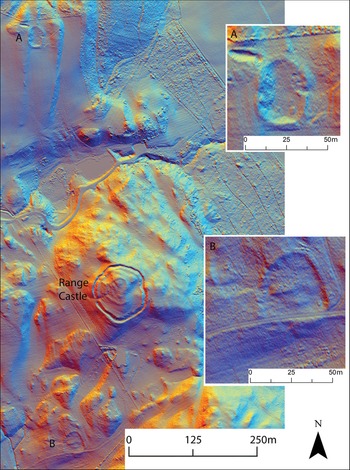 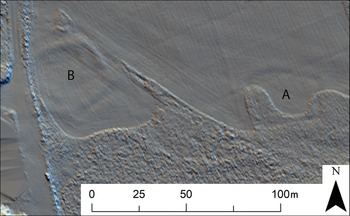 Figure 6. Lidar-derived multi-direction hillshade visualisation showing two Late Iron Age rectilinear settlement enclosures lying a short distance apart, near Beattock Station in Annandale. One (A) was discovered from the air as cropmarks by J.K. St Joseph in 1957, the second (B) by S. Halliday from lidar data in 2021 (figure by the authors; contains public sector information licensed under the Open Government Licence v3.0; lidar for Scotland Phase III DTM).