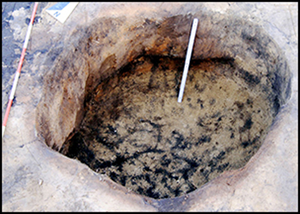 Dated to the transitional period from the Bronze Age to Early Iron Age (fourteenth to eighth centuries BC), a unique site discovered at Tartas-1 in Western Siberia has yielded the remains of frame-and-post structures, metallurgic furnaces, votive bronze objects, pottery fragments, and animal and human bones. The authors argue that this site represents the first known cultic complex in Western Siberia.

The problem of defining criteria for reliably identifying cultic complexes in archaeology (Renfrew et al. Reference Renfrew, Morley and Boyd2017) applies equally to archaeological sites of the transitional period from the Bronze to Early Iron Age in Western Siberia. In this region, such criteria include high saturation of the cultural layer with pottery, fish and animal bones, and the presence of human remains found among occupation layers, rather than in funerary contexts (Potemkina et al. Reference Potemkina, Korochkova and Stefanov1995). Since 2003, a team from the Institute of Archaeology and Ethnography of the Siberian Branch of the Russian Academy of Sciences, in collaboration with scholars from the Eurasian Department of the German Archaeological Institute, has been studying the archaeological site of Tartas-1 in the Baraba forest-steppe in Western Siberia, Novosibirsk region, Russia (Figure 1). This region lacks natural outcrops of stone and ores. Hence, the development of a lithic industry and bronze metallurgy (Parzinger Reference Parzinger2006) relied on imported raw materials in all chronological periods. 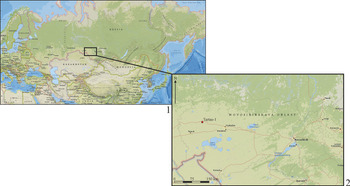 A unique site-type for this region was discovered in the eastern part of the Tartas-1 site, where a 2715m2 area revealed evidence of four structures, together with metal furnaces and pits, which were filled with fragments of pottery, crucibles, ladles, casting moulds, plaster, calcined animal bones, calcareous nodules and ochre.

The evidence for the structures comprises rows of postholes, which suggest that the walls of at least three of the structures (1, 2 & 4) were straight (Figure 2). The structures are unusual in their form, as contemporaneous (Bronze Age to Early Iron Age) buildings did not have straight walls, and had foundation pits and were multi-chambered (Korochkova Reference Korochkova2009). Furthermore, these structures have no evidence for the hearths or utility pits that we would expect to find in domestic dwellings or workshops. 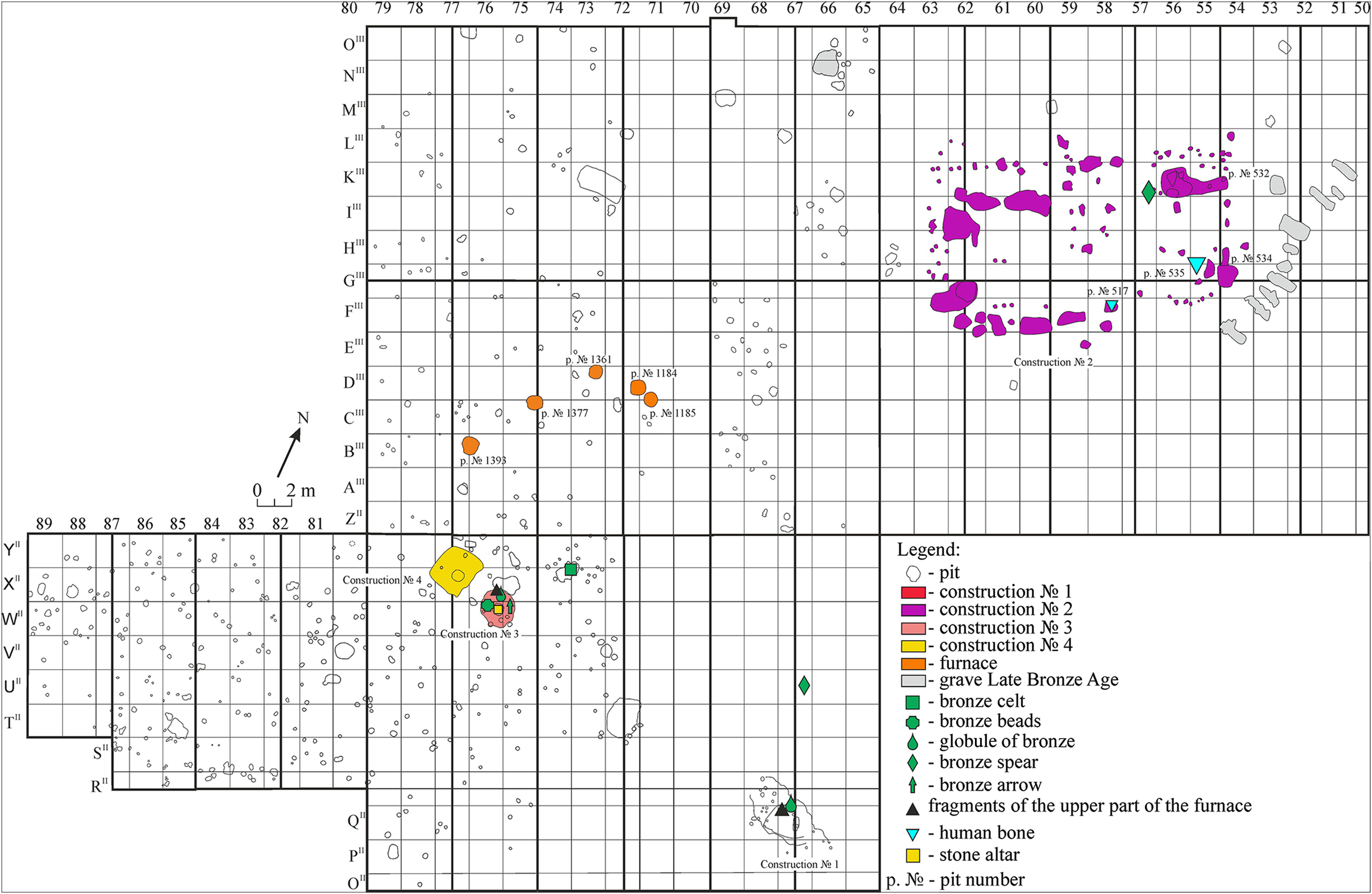 Figure 2. Excavation plan of the cultic complex of the eastern variant of the Pakhomovo Culture at Tartas-1, showing grids ZII–OIII/50–74 (drawing by D.V. Selin).

Located a short distance from the other buildings at the east side of the site, structure one contained fragments of the upper part of a furnace and what appears to be the remains of the cover of a furnace dome; a globule of bronze was also discovered within this structure. Structure two was sub-rectangular in plan and measured 10.60 × 17m. It was associated with four pits (numbers 517, 532, 534 & 535; Figure 3), around which were discovered fragments of human pelvic bone. Pit 517 contained a human adult calcaneus (heel bone). Several burials aligned east–west along a north–south axis lie to the east of structure two (Figures 2–3). These have no grave goods and, as they respect the structure, are likely to have been contemporaneous with it. The location of these burials close to the wall of structure two suggests a connection. The fragments of human bone, including pelvis and heel bones discovered inside structure two, may indicate that post-mortem manipulation of the dead was performed within this structure, with the remaining body parts subsequently buried in the graves immediately outside. This type of treatment of the dead is consistent with ritual practice in this period (Matyushchenko Reference Matyushchenko2004).

Structure three had a stone altar in its centre, around which were a selection of bronze objects interpreted as votive offerings. These include a deposit of unworked bronze, bronze beads and a bronze arrow. Another structure, structure four, was discovered immediately to the west of structure three. This was sub-rectangular in shape and yielded animal bones and ceramic shards.

The area that lay within grids AIII-MIII/71–77 was fully excavated, revealing the remains of five furnaces surrounded by postholes (Figures 2 & 4). Each furnace was similar in design, taking the form of a rounded pit measuring 0.79 × 0.73 × 0.60m, with calcined walls (Figure 4.2–3). Remains of charcoal, burnt bones and pottery fragments were found in the fill of pit 1361 (Figure 4.4–6). We believe that, together with structure one, these furnaces constituted a unified bronze-manufacturing system for acquiring metal, making alloys and producing bronze objects. Such objects that were manufactured at this site are those that represent the ‘offerings’ found around the stone altar in structure three and in other structures at the site. These include a socketed spearhead found in structure two, with the upper part of the blade intentionally bent (Figures 5.1–2), and a second spearhead discovered in an assemblage that included pottery fragments and animal bones (Figures 5.3–4). A celt axe with a cavity (Figure 5.5) belonging to the type of asymmetrical celt-adzes that exhibit a through socket was found above pit 681, close to structure three. A blank for a bronze arrowhead, along with two bronze beads (Figure 5.6), was found in the upper part of the fill of pit 898 in structure three. The arrowhead belongs to the type of double-bladed socketed arrowheads; similar products are found over a large part of Eurasia in the Late Bronze Age (Terenozhkin Reference Terenozhkin1976). 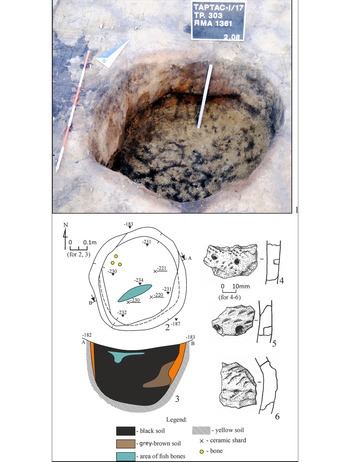 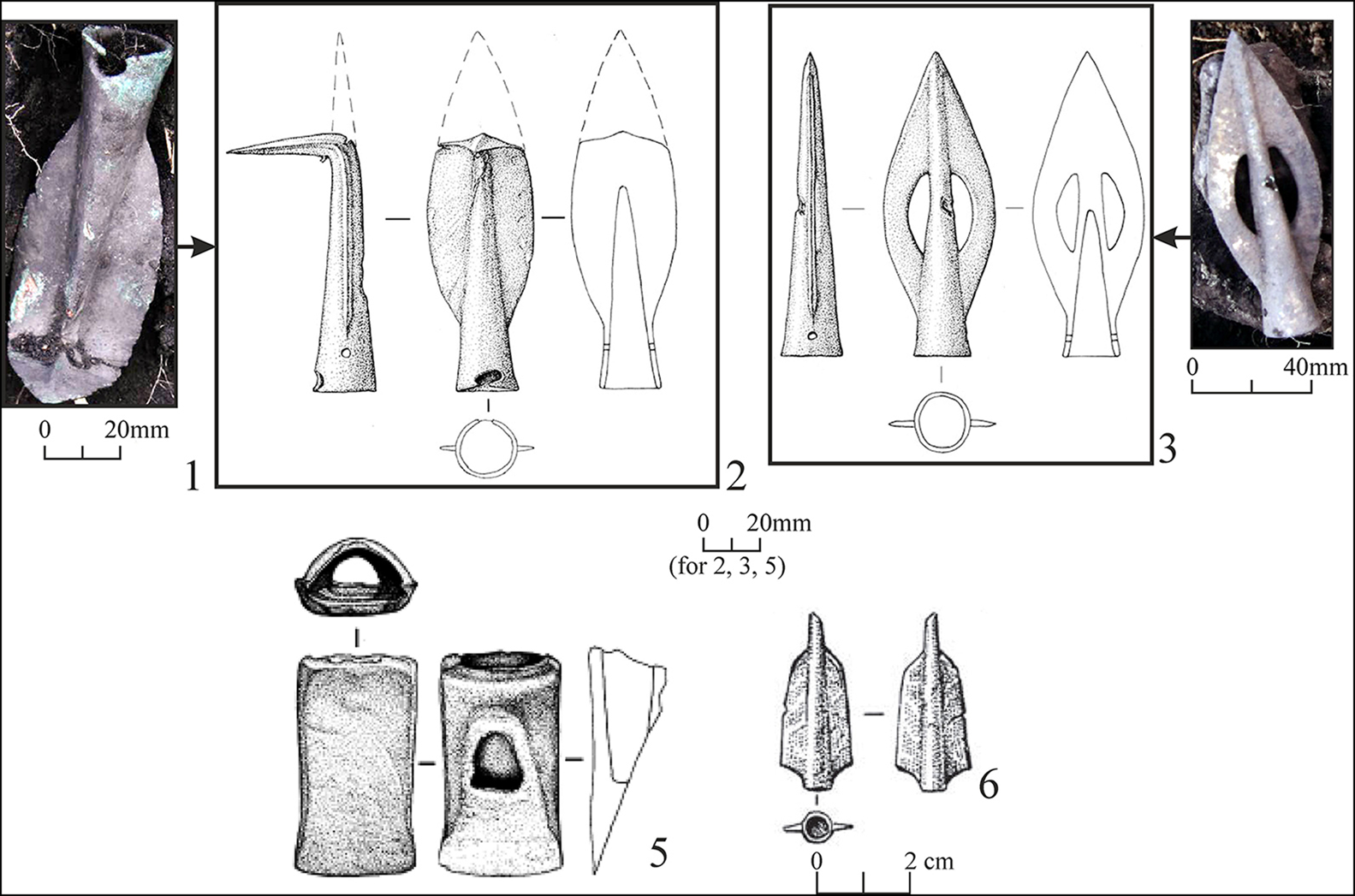 Microscopic study of the composition of pottery clay (based on analysis of 148 samples) has made it possible to establish three groups, which have been confirmed by petrographic analysis (based on 11 samples). The first group included 121 fragments of pottery of the eastern variant of the Pakhomovo Culture (Figure 6.1–3). The second group consisted of three fragments of Begazy-Dandybai Culture ceramics imported from Central Asia (probably from the territory of Kazakhstan), and dating from 1800–1250 BC. The third group (of 20 fragments) represents pottery that was produced using mixed manufacturing technology, resulting from interaction between communities using the eastern variant of the Pakhomovo Culture and those using the Begazy-Dandybai Culture (Figure 6.4–5). Two fragments represent wheel-thrown vessels (Figure 6.6). In Central Asia, wheel-thrown pottery was produced at the time of Namazga VI (Late Bronze Age, 1800–1500 BC) (Vinogradova & Kuz'mina Reference Vinogradova, Kuz'mina and Litvinskii1986). In Western Siberia, such pottery has been found together with artefacts associated with the Begazy-Dandybai Culture (Molodin & Neskorov Reference Molodin, Neskorov and Samashev1990). The wheel-thrown pottery from Tartas-1 is the most northern find of this kind in Eurasia to date (Loman et al. Reference Loman, Papin and Fedoruk2017). A ceramic fragment of the Late Irmen Culture (ninth to eighth centuries BC) (Figure 6.7) was discovered in the same context as the ceramic shard of the eastern variant of the Pakhomovo Culture in the fill of one of the pits (893, a circular pit in the centre of structure four), which demonstrates the contemporaneity of the users of these cultures at Tartas-1, and makes it possible to establish the chronology of the ritual complex. 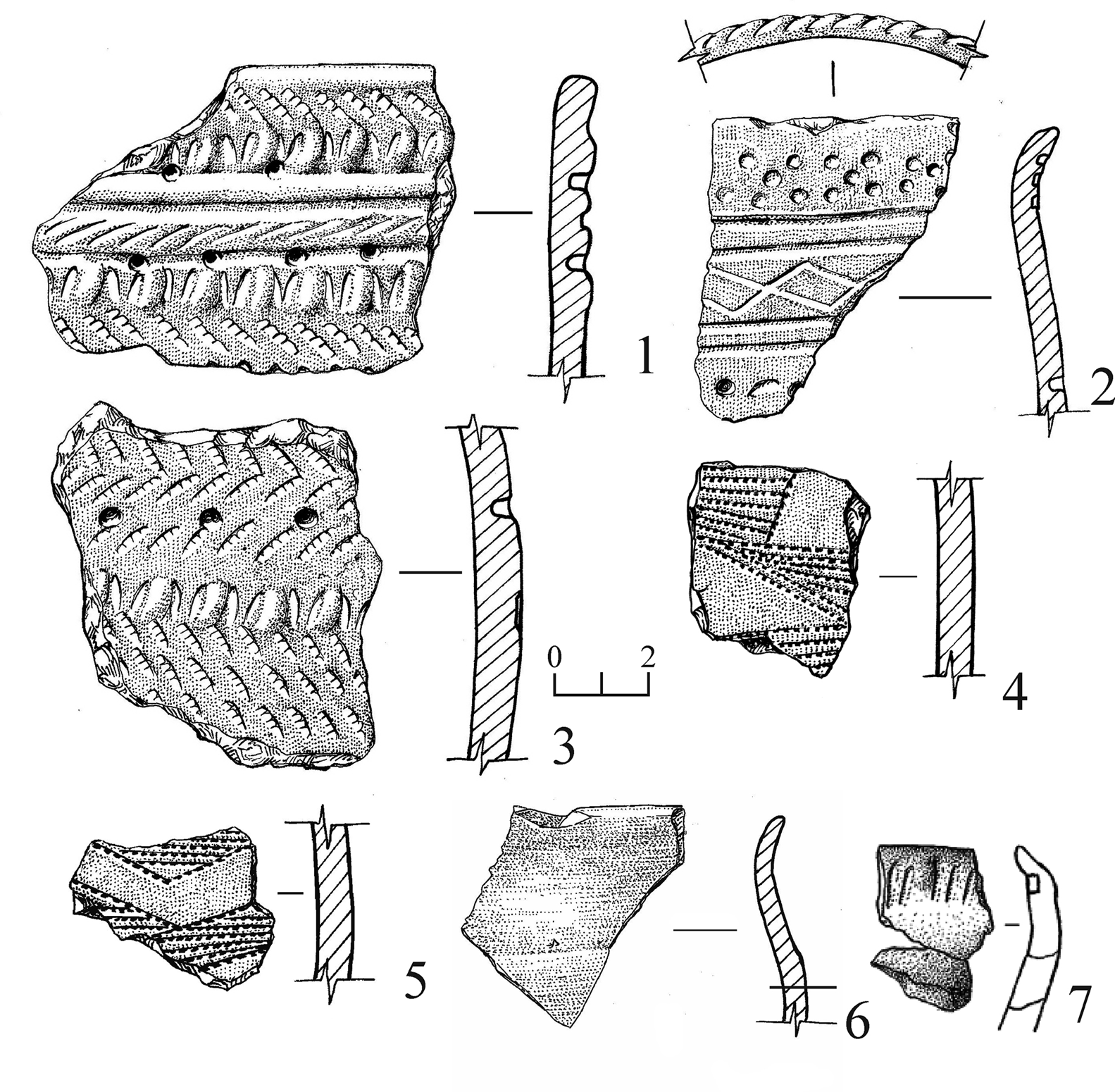 Based on typological analysis and a series of radiocarbon dates from the Chicha-1 site in the Novosibirsk region, the Late Irmen Culture fragment has been securely dated to the late ninth century to the seventh century BC (Molodin & Parzinger Reference Molodin, Parzinger, Molodin and Parzinger2009). The bronze artefacts from the complex have been broadly dated to the fourteenth to eighth centuries BC, thus placing the use of the ritual complex to within this latter timeframe. To date, we can say that the complex reflects only one archaeological culture—the eastern variant of the Pakhomovo Culture—and appears to have functioned for a long period. The relative simultaneity of the structures is suggested by the absence of structures overlapping one another. Organic samples have been submitted for radiocarbon dating, which will determine the presence or absence of individual phases of the functioning of this ritual complex.

Several features point to Tartas-1 being a cultic site. The unusual form of the structures, together with their lack of hearths and utility pits, suggests a different type of site from domestic or industrial. The unused bronze objects deposited within the structures and pits are not typical of contemporaneous settlements. The manipulated human remains were discovered in structure two together with the burials without grave goods. The location of burials belonging to different periods and cultures (including a burial ground of the eastern variant of the Pakhomovo Culture) near the complex also proves its cultic character.

The site at Tartas-1 is unique for the Final Bronze Age of Western Siberia. The frame-and-post, straight-walled structures, within which human remains were manipulated after death and bronze production was carried out, reveal a very different type of site to any others previously known in this region. Accompanied by ritual actions archaeologically manifested in the form of ‘offerings’ of bronze objects without any traces of use, the evidence suggests that this was a cultic complex.

The research was supported by the Russian Foundation for Basic Research (grant 18-09-40028).