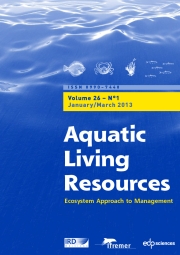 The incorporation of an attractant mixture by substitution of an equivalent amount of basal dietary mixture was studied in terms of feed intake and growth performance in European seabass juveniles (mean initial weight : 17 g) fed plant-protein rich diets during 21 days. Three diets had as main protein sources; fish meal, or one of two soy protein concentrates (S and E). To the basal mixture of these last two diets, as well as to a corn-gluten based diet, an attractant amino acid mixture was added at a 2.5% level. Daily feed intake was measured throughout the experimental period. Feed intake and weight gain were highest in seabass fed the fish meal based diet. In those fed the soy protein concentrate diets, the addition of the attractant mixture improved growth significantly; voluntary feed intake and feed efficiency were also ameliorated in these groups. In terms of growth, feed intake and protein utilisation, lowest values were found in fish fed with the corn-gluten rich diet, supplemented with the amino acid mixture.