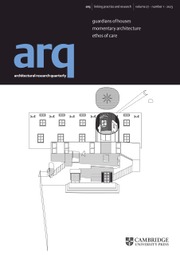 Downward trajectory: towards a theory of failure

When I first started researching the work of the Edwardian architect Horace Field (1861–1948), I soon realised that this was a man whose achievements could best be measured in terms quite antithetical to those conventionally used by architectural historians. Nearly all buildings are judged on the basis of their originality; and, if they are old, on the basis of their influence or their relationship to what subsequently became a significant direction in the arts or culture of their time. Even in a field such as the history of Victorian and Edwardian architecture, transformed by Mark Girouard and Alistair Service forty or more years ago, a story has only been worth telling when it is a story. If a collection of buildings adds up to very little, what then? Field's buildings are mostly incidental to other more interesting, more imaginative stories. Was he a failure, then, in designing buildings which fail to appear in their own right as part of a critical canon? Was he a failure too, in that his career started so promisingly and tailed away to nothing; that he was tucked away in rural Sussex, in Rye, fiddling about with old buildings and designing garages and cheap villas, while other architects of his generation spent their final years on some of the most enthralling projects of their lives? Or does the story of Field's career suggest that there are other ways to evaluate an architectural career than to tell the story of its conventionally-defined successes?

Downward trajectory: towards a theory of failure
×

Downward trajectory: towards a theory of failure
×

Downward trajectory: towards a theory of failure
×
×