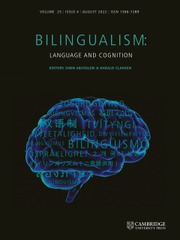 The current study analyzes Spanish present tense morphology with a focus on overregularization. It examines written production from two groups of English/Spanish bilingual children in a dual immersion setting, Spanish heritage language (SHL) speakers (n = 21) and Spanish second language (SL2) learners (n = 41), comparing them to age-matched (nine to ten years old) Spanish majority language children (n = 15). Spanish majority children show full mastery of present tense regular, stem-changing and irregular morphology. SHL children seem to have acquired mastery of regular inflectional morphology, but not of stem-changing morphology. SL2 children are significantly less accurate than both majority Spanish and SHL children in terms of both regular and irregular morphology. Evidence of overregularization, but not of irregularization, is provided for both SHL and SL2 children. The analysis of overregularization errors supports a variational approach (Yang, 2016) to acquisition, storage and access of morphology.