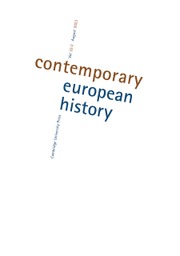 The Perils of Displacement: The Soviet Evacuee between Refugee and Deportee

In the wake of the German invasion of June 1941, sixteen and a half million Soviet citizens were evacuated to the country's interior. Unlike the archetypal European refugee, the Soviet evacuee was displaced but not stateless. This article, based on previously unexamined sources from archives in Russia and Uzbekistan, examines the status of the displaced in a state in which rights were grounded in territory and the lack of fixed residence could have dire implications. More specifically, it focuses on the way in which the evacuee was conceived in relation to the ‘refugee’ and the ‘deportee’.

1 The estimate of sixteen and a half million is taken from Mark, Harrison, Soviet Planning in Peace and War, 1938–1945 (Cambridge: Cambridge University Press, 1985), 72Google Scholar. While the most significant wave of evacuations took place in the months following the invasion, there was a second wave in summer and autumn 1942.

3 Unlike the terms evacuee and deportee, the term refugee (bezhenets) was not a formal, administrative category during the war. While the status of deportee was a highly differentiated one, encompassing a range of groups each of which was subject to somewhat different regulations, for the purposes of this article I have used the term ‘deportee’ to refer mainly to the so-called special settlers (spetsposelentsy), who constituted a clear majority among deportees during the war. On this category see Zemskov, V. N., ‘Spetsposelentsy (po dokumentam NKVD-MVD SSSR)’, Sotsiologicheskie issledovaniia, 11 (1990), 3–17Google Scholar.

17 For an interesting critique of the use of arboreal metaphors in scholarship on population displacement, see Liisa Malkki, ‘National Geographic: The Rooting of Peoples and the Territorialization of National Identity among Scholars and Refugees’, Cultural Anthropology, 7, 1 (1992), 24–44. Ultimately, my own position more closely resembles that of Gaim Kibreab, who has underscored the importance of rights (in his case citizenship rights) in shaping people's attitudes towards and experience of displacement. See Gaim, Kibreab, ‘Revisiting the Debate on People, Place, Identity and Displacement’, Journal of Refugee Studies 12, 4 (1999): 384–410Google Scholar.

41 Ibid. Note that homeless and neglected children were also targeted. They were to be rounded up and put in children's homes.

43 The citation is from a decree by the Government Commission for Controlling the Spread of Infectious Diseases, GAGT, f. 10, op. 17, d. 51, ll. 9–10. The other decree, issued by the Uzbek Sovnarkom, can be found in GAGT, f. 10, op. 17, d. 51, l. 212. Other, similar, decrees, drawn up by the NKVD and designed to ‘prohibit the entrance into Tashkent of people who do not have the right or the permission to reside in Tashkent’, instructed railway authorities to establish a round-the-clock checkpoint at the exits from the station. Only those with a propiska (registration stamp) in their passports for Tashkent were to be permitted to leave the station. Tsentral'nyi gosudarstvennyi arkhiv respubliki Uzbekistana (TsGARUz), f. 314, op. 1, d. 37, l. 11.

48 The ‘categories of individuals’ who were ‘refused passports in “regime” cities’ are described by Paul Hagenloh as ‘residents’, ‘not connected with industry or education or not carrying out socially useful labor’, kulaks fleeing from the countryside, individuals who had arrived in cities after January 1, 1931 without an invitation to work or who, although they were presently employed, were ‘obvious labor shirkers [letuny] or have been fired in the past for disorganization of production, and lishentsy [disenfranchised persons]’. Paul M. Hagenloh, ‘“Socially Harmful Elements” and the Terror’, in Sheila, Fitzpatrick, ed., Stalinism: New Directions (New York: Routledge, 2000), 295Google Scholar. On the passport system more generally see Gijs, Kessler, ‘The Passport System and State Control over Population Flows in the Soviet Union, 1932–1940’, Cahiers du Monde Russe, 42, 2–3–4 (2001), 477–503Google Scholar; Nathalie, Moine, ‘Passportisation, statistique des migrations et contrôle de l'identité sociale’, Cahiers du monde russe, 38, 4 (1997), 587–600Google Scholar; Shearer, David R., ‘Elements Near and Alien: Passportization, Policing, and Identity in the Stalinist State, 1932–1952’, Journal of Modern History, 76, 4 (2004): 835–81CrossRefGoogle Scholar; and Popov, V. P., ‘Pasportnaia sistema v SSSR’, Sotsiologicheskoe issledovanie, 9 (1995): 3–13Google Scholar.

50 The Evacuation Council's critique of the Azerbaijani plan contained the following spirited defence of evacuees: ‘In addition to the planned distribution of evacuees in your Republic in accordance with the decisions of the Evacuation Council, the family members of the party and Soviet aktiv, the families of workers and employees who have been taken in by their relatives or acquaintances, etc., may (and evidently have) come to your Republic from the frontline regions, and there are no grounds to expel or resettle them.’ Ibid., l. 158.

51 GARF, f. A-259, op. 40, d. 3017, l. 4. The memo also stated that ‘the Commissariat of Justice considers it necessary to establish that the distribution of tickets for railway transportation and transportation by ship take place only with the permission of the organs of the police’.

61 The decree is mentioned in a report by the director of the NKVD's division of spetspereselentsy (special settlers) published in Nikolai Fedorovich Bugai, ‘Mobilizovat nemtsev v rabochie kolonny– I. Stalin:’ sbornik dokumentov (1940-e gody) (Moscow: ‘Gotika’, 1998), 30. The Germans sent from the Crimea to the Ordzhonikidze krai were repeatedly included in the count of evacuees. The order on the evacuation of Germans preceded more general evacuation orders in the Crimea by four days. See GARF, f. 6822, op. 1, d. 43, l. 8.

62 The report itself requests that local authorities be ordered to expel ‘neblagonadezhnye elementy’. Bukov, Gorinov and Ponomarev, Moskva voennaia, 77.

64 N. A. Lomagin, ed., Neizvstnaia blokada (Dokumenty, prilozheniia), vol. 2 (Saint Petersburg: Izdatel'skii Dom ‘Neva’, 2002), 23–5. A similar conflation of evacuation and deportation occurred a few months later in an operation carried out in Moscow. On this occasion, the Evacuation Council ordered the ‘evacuation’ of ‘people with no fixed occupation or place of residence, the criminal element, people who have been arrested and tried, non-registered residents, and the population that has accumulated at the city's evacuation centres’. GARF, f. 6822, op. 1, d. 482, l. 1. (Note that while the population at the city's evacuation centres was dispatched to the Gor'kii region, the other groups were sent to the Mordovskaia ASSR.) In this instance, a standard NKVD operation undertaken, in the words of the NKVD agent involved, ‘in order to cleanse the city’ (v poriadke ochishchenii goroda), was carried out under the auspices of the Evacuation Council. Ibid., ll. 1–2.

Interestingly, complaints were lodged with the Evacuation Council regarding the uncontrolled movement of both evacuees and deportees. The special settler division of the NKVD complained to the Evacuation Council that ‘taking advantage of the lack of a reliable count, German migrants [pereselentsy] wilfully move from collective farm to collective farm, from district to district, and even to other oblasts’. GARF, f. A-259, op. 20, d. 3032, l. 52. Similar complaints were repeatedly made about evacuees, despite the ostensibly clear refusal to impose the same restrictions on their movements. An example from Uzbekistan can be found in TsGARUz, f. 837, op. 32, d. 3519, l. 2.

68 Ibid., d. 2894, l. 121. In autumn 1941 Tashkent municipal authorities, in conjunction with an Uzbek Sovnarkom decree, authorised ‘the allocation of 50,000 roubles from the local budget for December for the provision of aid to very needy evacuees from the frontline regions’. GAGT, f. 10, op. 17, d. 14, l. 111. In February 1942, municipal authorities requested additional funds from the Uzbek Sovnarkom, also for one-off aid disbursements, on the grounds that ‘at present the Executive Committee of the Tashkent City Soviet does not have funds for this purpose’. TsGARUz, f. 837, op. 32, d. 3416, l. 182.

70 Ibid. According to the report, there had been an initial decree on the provisioning of evacuees from both Moscow and Leningrad, but the decree was annulled by the Commissariat of Trade in mid July 1941.

The Perils of Displacement: The Soviet Evacuee between Refugee and Deportee
×

The Perils of Displacement: The Soviet Evacuee between Refugee and Deportee
×

The Perils of Displacement: The Soviet Evacuee between Refugee and Deportee
×
×