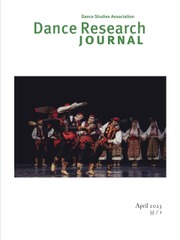 The formation of what Randy Martin has called “critical dance studies” (1998) has gained increased momentum over the past decade. Martin's notion of critical dance studies clarified how dance scholarship was being reshaped by the explicit inclusion of critical theory in its methodologies and epistemologies. One of the major consequences for dance studies in embracing critical theory was the identification of dancing and choreographic practices as being also theory. Understanding dance as theory is not equivalent to seeing dance as the sole provider of the theoretical tools it needs for its own analysis (this would be intolerably solipsistic). Rather, it means that dance becomes a privileged practice ready to provide analytical tools for theorizing other areas of social performances: politics, culture, formations of disciplines and their bodies (docile or resistant). Dance is a mode of theorization that theory itself would need in order to address the social and political problematic brought by issues close to dance such as mobilization, embodiment, subjectivities, participation, representation, desire, discipline, control, etc.