Consumption of palatable foods high in refined carbohydrate has been implicated as a contributing factor to the epidemic levels of obesity. Such foods may disrupt appetite regulation in the hypothalamus through alterations in hunger and satiety signalling. This investigation examined whether a palatable high refined carbohydrate (HRC) diet with the potential to induce obesity was linked to modulation of serotonin and dopamine signalling within the hypothalamus of rats. Male Wistar rats were allowed ad libitum access to either a palatable refined carbohydrate enriched (HRC) diet or standard chow (SC). Visceral fat percentage was used as a measure of the animals' weight gain during the trial. Real-time PCR was applied to determine any variation in levels of expression of the serotonin (Slc6A4 or Sert) and dopamine transporter (Slc6A3 or Dat) genes. After 29 weeks, the HRC group showed a significant increase in visceral fat percentage accompanied by increased expression of Sert. Higher levels of circulating triglycerides were also seen. This investigation determined that a refined high carbohydrate diet is associated with visceral obesity, increased circulating lipids in the blood and distorted serotonergic signalling, which possibly alters satiety and hunger signals.

The dopaminergic circuit has long been associated with food intake (Quarta et al., Reference Quarta and Smolders2014). Dopamine appears to function as an inhibitor of food consumption and hyperphagia by establishing control over the number and duration of meals (Meguid et al., Reference Meguid, Fetissov, Varma, Sato, Zhang, Laviano and Rossi-Fanelli2000). High carbohydrate content diets with protein restriction have an effect on dopamine efflux in the striatum of rats associated with coping response (Yeghiayan et al., Reference Yeghiayan, Georgelis, Maher and Lieberman2004). A major regulator of dopamine in the brain is the sodium dependent dopamine transporter (Dat or Slc6A3) and its modification due to high fat diet exposure has also been linked with obesity (Vucetic et al., Reference Vucetic, Carlin, Totoki and Reyes2012).

Serotonin is known as a major regulator of feeding (Lam et al., Reference Lam, Garfield, Marston, Shaw and Heisler2010). Although there is growing support for the function of serotonin in central and peripheral control of food intake and energy balance regulation, conserved from mammals to fish, the specific neuronal mechanisms underlying the serotonergic pathway are still emerging (Johnston & Glanville, Reference Johnston and Glanville1994; Donovan & Tecott, Reference Donovan and Tecott2013). Serotonergic signalling is further controlled by the serotonin transporter (Sert or Slc6A4), which traffics serotonin from the synaptic cleft to the pre-synaptic membrane (Zhou et al., Reference Zhou, Xu, Bledsoe, Lin and Kelley1996). Agents that block the re-uptake of serotonin, such as fenfluramine and selective serotonin reuptake inhibitors, elicit powerful anorectic effects (Garfield & Heisler, Reference Garfield and Heisler2009), suggesting a role for Sert in feeding behaviour.

This investigation focused on the neural processes that govern the tendency to overeat palatable carbohydrates beyond homeostatic needs. Here we examine whether such diets are associated with changes in hypothalamic expression of Sert and Dat and lipid metabolisms in rats.

(i) Animal training and tissue collection

A total of 49 ten-week old male Wistar rats were housed in the Griffith University Animal Facility in a room maintained at 23 °C with a 12-hour day–night cycle. All studies were performed in accordance with the guidelines of the Animal Ethics Committee of Griffith University (Permit No: MSC/08/10/AEC), which is accredited by the Queensland Government, Department of Primary Industries and Fisheries under the guidelines of The Animal Care and Protection Act 2001, Section 757. The animals were randomly assigned to one of two diet groups for a 29-week feeding period. Following a model developed by du Toit et al. (Reference du Toit, Smith, Muller, Strijdom, Stouthammer, Woodiwiss, Norton and Lochner2008), the two diet groups had ad libitum access to food and water. The high refined carbohydrate (HRC) diet was made by combining 3·2 kg of rat chow soaked in water with 3 kg of sweetened condensed milk and 0·56 kg of raw sugar. The resulting macronutrient composition was 82% carbohydrate, 11% protein and 7% fat; while the standard chow (SC) diet consisted of 73% carbohydrate, 18% protein and 9% fat. Energy intake was measured by daily food consumption documented by weighing the food left in the cage when doing the daily food replacement. Knowing the weight of food consumed and the macronutrient content of the diets, we were able to calculate the daily caloric intake of the SC and HRC rats. All rats were weighed before being euthanized by lethal injection of anaesthesia at the age of 39 weeks. Each rat brain was rapidly removed from the skull and placed on a flat surface on ice with the ventral surface uppermost. The hypothalamus was quickly dissected from the fresh brain with the aid of a standard rat brain atlas (Paxinos et al., Reference Paxinos, Watson and Emson1980), stored in RNAlater (Qiagen, Hilden, Germany) and snap frozen at −80 °C until required. Total visceral fat tissue was collected to determine the percentage of visceral fat of each individual to be used as an indicator of obesity.

We also examined any potential differences in levels of serum triglycerides, glucose and insulin, and determined the homeostatic model assessment of insulin resistance (HOMA-IR) prior to sacrifice. Animals examined were fasted for 5 hours before blood to be used in the biochemical analyses was collected. Serum triglycerides and glucose levels were determined in fresh whole blood using a Blood-Lipid and Glucose Analyser (L.D.X. Cholestech Analyser, Alere, Australia). For serum analysis, the remaining blood samples were placed in serum separation tubes (BD Vacutainer tubes), centrifuged and the serum stored at −80 °C for later analysis. Levels of insulin (ALPCO Immunoassays, Salem, NH, USA) were determined in 96-well enzyme-linked immunosorbant assays (ELISAs) according to the manufacturer's instructions. The HOMA index was used to assess insulin resistance in the HRC and SC animals using fasting blood glucose and insulin levels and applying the standard formula: [fasting insulin (μIU/ml) × fasting glucose (mmol/l)] / 22·5.

Data for gene expression and biochemical parameters were analysed by independent t tests using SPSS Version 17. The differences were considered to be significant at p < 0·05. 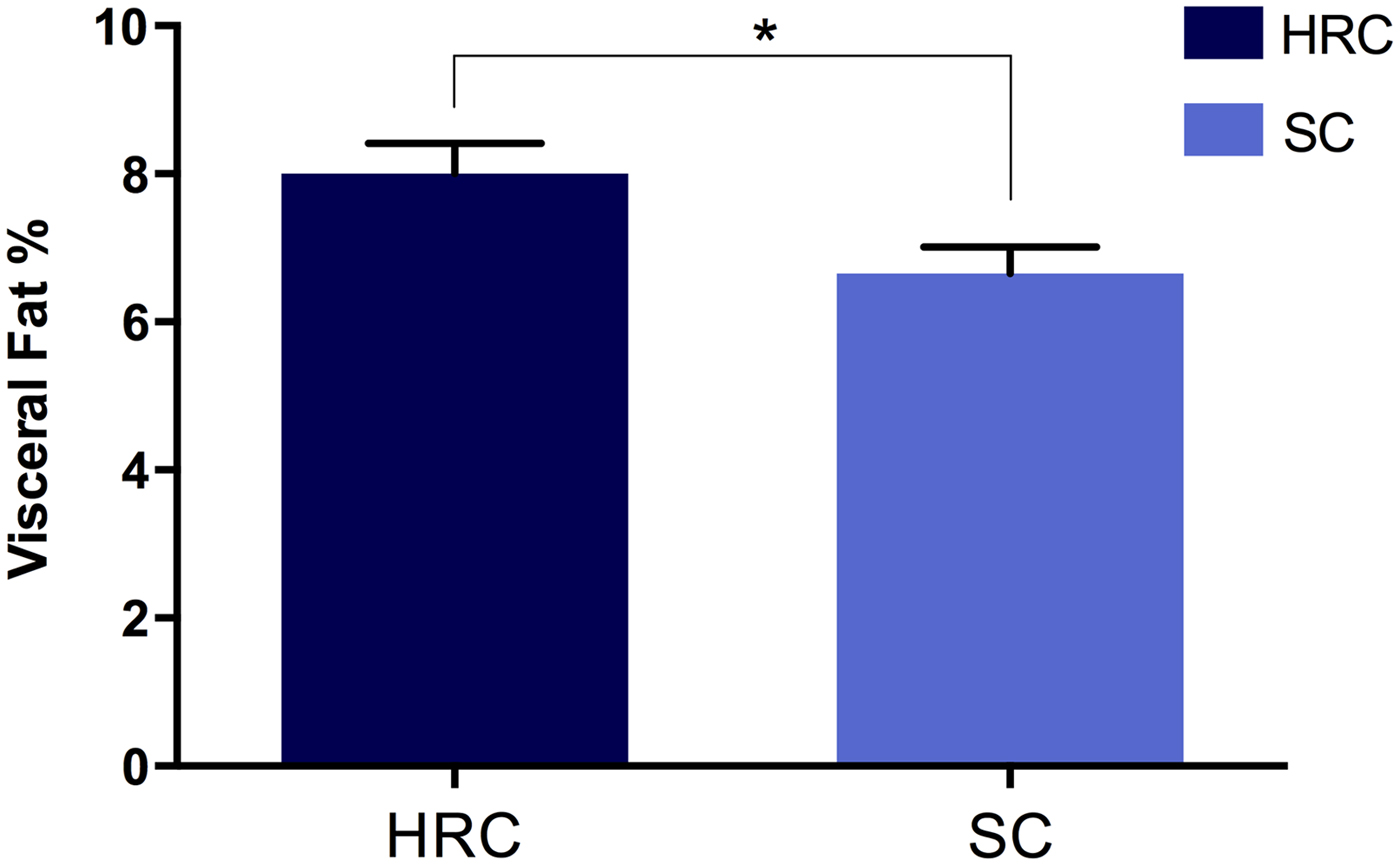 We then examined triglycerides, glucose and insulin levels and calculated HOMA-IR in a subset of the animals (SC = 10, HRC = 10 for triglycerides and glucose; SC = 5, HRC = 5 for insulin and HOMA-IR; Table 2).

Here we detected a significant difference between SC and HRC rats for triglycerides measurements, while there was no evidence of insulin resistance or development of diabetes. This is consistent with previous findings linking elevated circulating triglycerides levels with increase in body weight and obesity (Bocarsly et al., Reference Bocarsly, Powell, Avena and Hoebel2010).

Next, we investigated whether the visceral obesity present in the HRC group was associated with alterations in serotonin and dopamine signalling within the rat hypothalamus by measuring the mRNA levels of both neurotransmitter transporters. Our results showed that expression of Sert was significantly increased in the HRC diet group compared to the SC group (p = 0·032, t = 2·227, df = 35; Fig. 3). Conversely, there was no difference in expression levels of Dat (p = 0·720, t = 0·620, df = 34). These results implied the involvement of the serotonergic but not dopaminergic pathway in the development of visceral obesity. 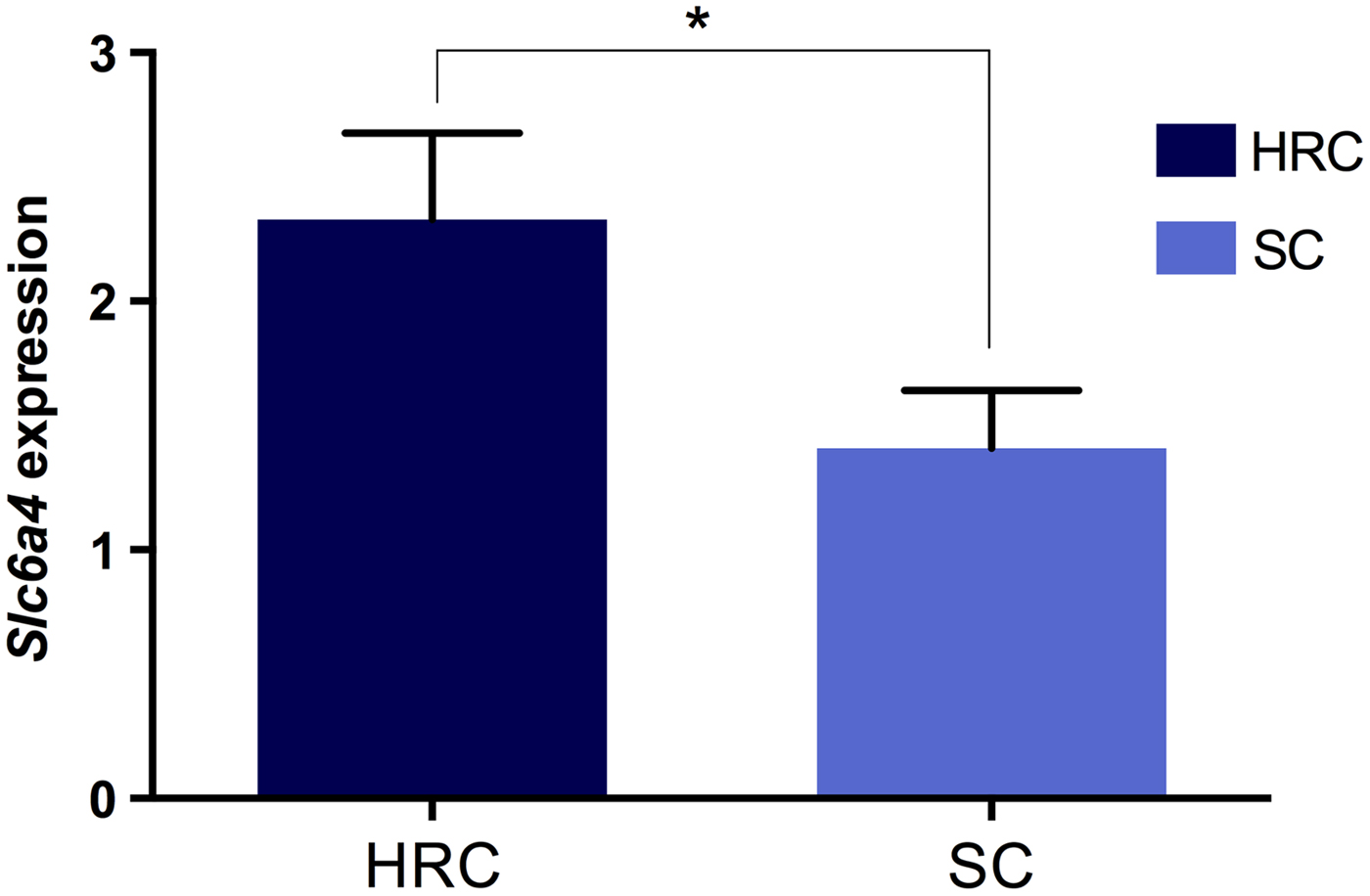 This study has examined the effect of a palatable HRC diet on food consumptive behaviour and the expression of two important genes involved in hypothalamic control of feeding in rodents. We verified that increased levels of Sert within the rat hypothalamus, as a consequence of carbohydrate overconsumption, leads to aberrant eating behaviour. Development of visceral obesity and higher levels of circulating triglycerides follow this response.

Here we found that the palatable refined carbohydrate diet altered consumptive behaviour that led to distorted lipid metabolism, with no evidence of insulin resistance or diabetes. The role of triglycerides and lipid metabolism is only now emerging and its influence in consumptive behaviour is yet to be clarified. Recent investigations nonetheless have indicated the presence of triglycerides in the mesolimbic brain region as a regulator of the reward pathway (Cansell et al., Reference Cansell, Castel, Denis, Rouch, Delbes, Martinez, Mestivier, Finan, Maldonado-Aviles, Rijnsburger, Tschöp, DiLeone, Eckel, la Fleur, Magnan, Hnasko and Luquet2014). In high saturated fat diets, increased circulation of triglycerides has also been shown to alter the hypothalamus circuitries and induce overeating in rodents (Barson et al., Reference Barson, Karatayev, Gaysinskaya, Chang and Leibowitz2012). Given that triglyceride excess has been associated with heart disease (Harchaoui et al., Reference Harchaoui, Visser, Kastelein, Stroes and Dallinga-Thie2009), our results are consistent with a link between carbohydrate overconsumption and development of coronary disease risk factors.

The mechanisms resulting in the upregulation of Sert remain elusive. The complexity of Sert expression and function is not yet fully understood (Daws & Gould, Reference Daws and Gould2011). Nonetheless, given that in vitro studies have shown that long-term exposure to high glucose concentrations further increases the activity of Sert (Goncalves et al., Reference Goncalves, Araujo and Martel2008), it is possible that the consumption of refined carbohydrate over an extended time determined the patterns of expression of Sert seen in our investigation. Recent findings showed a correlation between increased serotonin signalling and obesity (Crane et al., Reference Crane, Palanivel, Mottillo, Bujak, Wang, Ford, Collins, Blumer, Fullerton, Yabut, Kim, Ghia, Hamza, Morrison, Schertzer, Dyck, Khan and Steinberg2015), while earlier investigations suggested that decreased Sert protects against rising glucose levels in female rats (Homberg et al., Reference Homberg, la Fleur and Cuppen2010). Growing evidence in support of a link between serotonin trafficking, food intake and obesity warrants further research to identify the underlying molecular circuitry of these associations. A limitation of our study was that we were unable to confirm the specific influence of palatability on altered eating behaviour and serotonergic signalling as a group of rats fed with a non-palatable HRC diet was not included in the study.

We have demonstrated that a palatable HRC diet causes changes in the serotonergic pathway driving abnormal eating behaviour, visceral obesity and altered lipid metabolism in rats. To clarify the relationship between food quality, palatability, the level of consumption and Sert patterns of expression, future investigations could include a second treatment group fed with a non-palatable HRC diet, along with palatable HRC and SC diet groups.

Our results contribute to the growing body of knowledge implicating the serotonergic system in the hypothalamic control of energy intake and may assist in the understanding of neurophysiological mechanisms underlying the obesity epidemic.

The authors wish to acknowledge Griffith University School of Medical Science for its funding support. The funding source had no involvement in the experimental design, interpretation of the results or the manuscript.

* Views captured on Cambridge Core between September 2016 - 27th February 2021. This data will be updated every 24 hours.