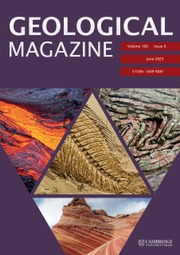 The Genetic Relationships of Pegmatites, Aplites, and Tin Veins1

From the conclusions regarding the formation of complex pegmatites from the field and microscopic evidence, the following sequence of events is suggested:—

Towards the end of the solidification of a granite magma a liquid remains, having the general composition of a common pegmatite, but with small quantities of sodium and some rarer elements. By squeezing during crystallization this magma is separated into two distinct parts, one of which forms common aplite dykes. The other, more aqueous portion, when tapped by fissures, solidifies more slowly to form dykes, sills, or stringers of common pegmatite. During this solidification the albite (in solution), together with rare elements and their compounds, is concentrated in the remaining liquid portion, which now contains a very high proportion of water. This aqueous solution begins to migrate up the dykes or sills of common pegmatite, possibly even before the latter has completely solidified, showing a preference for the foot-wall, and begins to replace the earlier minerals, The first stage is the replacement of potash felspar, either microcline or orthoclase, by albite. Later there is a replacement of albite and sometimes of earlier minerals by spodumene, lepidolite, cassiterite, tantalite, etc. Cassiterite, possibly due to being carried in combination with a volatile element tends to be deposited in the uppermost part of the dyke or sill, where, however, some albite replacement has always preceded it.

A synopsis of a thesis presented as part of the requirements for the degree of Doctor of Philosophy at the University of Toronto.

The Genetic Relationships of Pegmatites, Aplites, and Tin Veins1
×

The Genetic Relationships of Pegmatites, Aplites, and Tin Veins1
×

The Genetic Relationships of Pegmatites, Aplites, and Tin Veins1
×
×