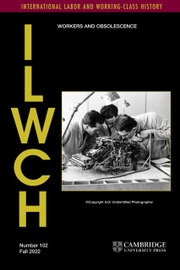 Languages of Affection and Rationality: Household Workers' Strategies before the Tribunal of Domestic Work, Buenos Aires, 1956–2013*

This article analyzes household workers’ discursive strategies before the Tribunal of Domestic Work (TDW) between 1956 and 2013. The TDW is an institution created in 1956 to arbitrate labor relations within domestic service in Buenos Aires. This article shows that workers’ strategies use alternatively a language of rationality and labor relations on the one hand, and of affection and family-like bonds on the other. The overlap of languages of rationality and affection persisted during the entire period under analysis. However, it did not have the same significance over time. Specific articulations of affect or rationality legitimated workers’ rights at different moments in relation to particular labor relations. Based on a close reading of more than 800 case records, the article shows that, despite the particularities of any individual cases, patterns of argument emerged, connected to changes in the world of labor and transformations in the dynamics of domestic service.

Following the unions’ usual terminology, we use the term “household worker” to refer to the workers.

3. Donna Goldstein, Laughter Out of Place. Race, Class, Violence, and Sexuality in a Rio Shantytown (Berkeley and Los Angeles, 2003).

38. As has been pointed out by Rebekah Pite, in Argentina domestic service was usually handled by female employers, in what can be described as a maternalistic relation. Nevertheless, this is not always visible in the demands issued before the TDW, sometimes addressed to male employers and sometimes to their wives. Pite, “Entertaining Inequalities.”

46. Calculations based on data provided by Mónica Gogna, “Empleadas domésticas.”

51. The obligation to provide daycare centers, however, was not enforced.

Languages of Affection and Rationality: Household Workers' Strategies before the Tribunal of Domestic Work, Buenos Aires, 1956–2013*
×

Languages of Affection and Rationality: Household Workers' Strategies before the Tribunal of Domestic Work, Buenos Aires, 1956–2013*
×

Languages of Affection and Rationality: Household Workers' Strategies before the Tribunal of Domestic Work, Buenos Aires, 1956–2013*
×
×