A Flight to Domesticity? Making a Home in the Gentlemen's Clubs of London, 1880–1914 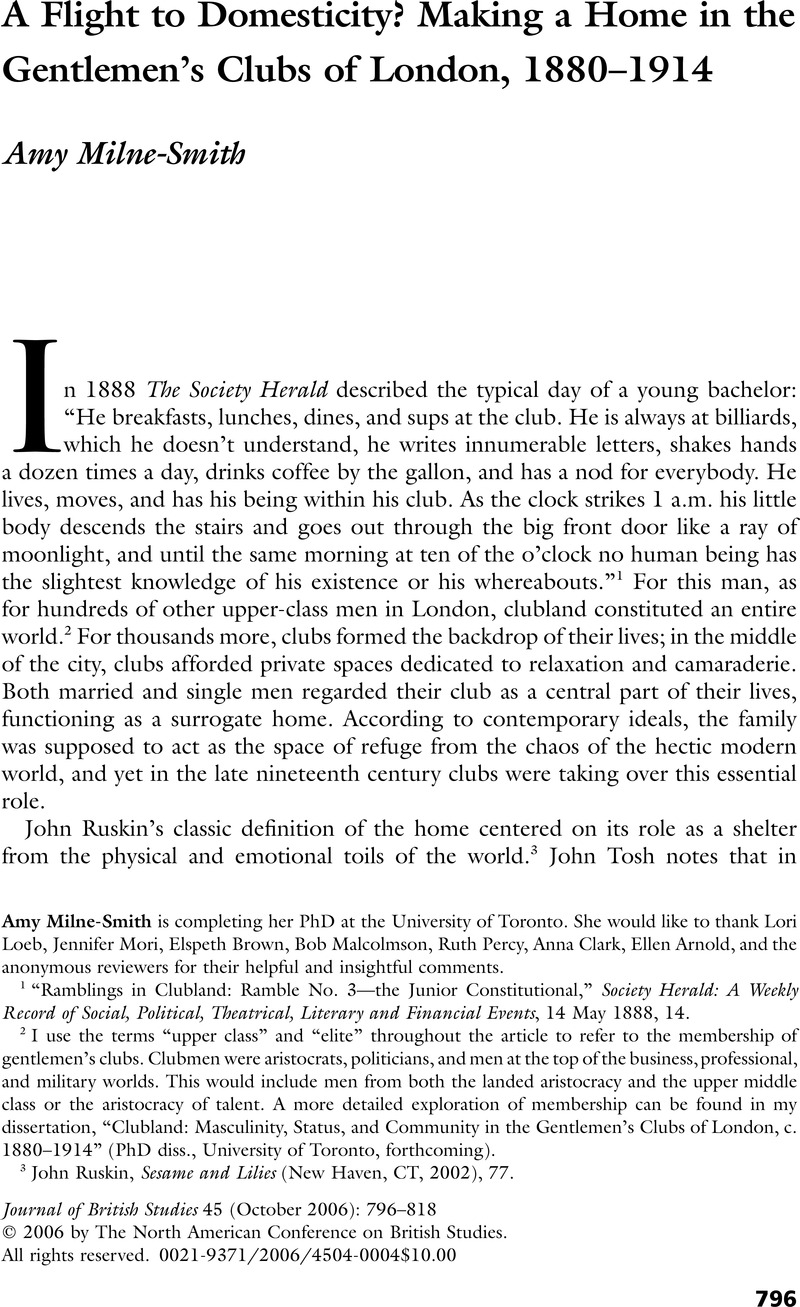 1 “Ramblings in Clubland: Ramble No. 3—the Junior Constitutional,” Society Herald: A Weekly Record of Social, Political, Theatrical, Literary and Financial Events, 14 May 1888, 14.

2 I use the terms “upper class” and “elite” throughout the article to refer to the membership of gentlemen's clubs. Clubmen were aristocrats, politicians, and men at the top of the business, professional, and military worlds. This would include men from both the landed aristocracy and the upper middle class or the aristocracy of talent. A more detailed exploration of membership can be found in my dissertation, “Clubland: Masculinity, Status, and Community in the Gentlemen's Clubs of London, c. 1880–1914” (PhD diss., University of Toronto, forthcoming).

9 Any formalistic domestic ideal also met some resistance from the working classes, who maintained traditions of the open stoop, back garden gossip, and more formal parlor culture; see Thompson, F. M. L., The Rise of Respectable Society: A Social History of Victorian Britain, 1830–1900 (Cambridge, 1988), 192–96. The inability of most working-class men to earn breadwinner wages and the continuing tradition of domestic violence also implied that a working-class home was far from the middle-class domestic ideal, despite its rhetorical popularity; see Clark, Anna, The Struggle for the Breeches: Gender and the Making of the British Working Class (Berkeley, 1995), 248–63. Martin Hewitt's work on middle-class visitation rituals suggests a modified ideal of domestic privacy among the working classes, along different lines and with different values from the middle classes; see “District Visiting and the Constitution of Domestic Space in the Mid-Nineteenth Century,” in Domestic Space: Reading the Nineteenth-Century Interior, ed. Bryden, Inga and Floyd, Janet (Manchester, 1999), 137–38.

10 Huggins, Mike (“More Sinful Pleasures? Leisure, Respectability and the Male Middle Classes in Victorian England,” Journal of Social History 33 [2000]: 593) points to the club as a center of drink and sociability merely posing as a respectable retreat. Hearn, Jeff (Men in the Public Eye: The Construction and Deconstruction of Public Men and Public Patriarchies [London, 1992], 224) explains club and pub life as examples of “homoerotic self-advertisement.” Murray, Venetia (High Society: A Social History of the Regency Period 1788–1830 [London, 1998], 158) points to clubs of the Regency era as escapes from women's social world. Howard Chudacoff's work in the American context is an exception to this trend, as he notes that late nineteenth-century clubs tended to present a cozy and domestic atmosphere; see The Age of the Bachelor: Creating an American Subculture (Princeton, NJ, 1999), 42.

15 The fact of many male family members belonging to the same club was common, some even forming dynastic legacies (e.g., the Devonshire family at Brooks's Club); see Lejeune, Anthony, The Gentlemen's Clubs of London (London, 1979), 8.

16 It should be noted that Tosh's work on a late nineteenth-century flight from domesticity focuses on the middle classes and does not deal explicitly with the upper middle classes or the elites; see Tosh, John, Manliness and Masculinities in Nineteenth-Century Britain (Harlow, 2005), 107.

20 Lejeune uses the term “gentlemen's club” in its most embracive sense, and thus his numbers are higher; see Lejeune, , White’s: The First Three Hundred Years (London, 1993), 132.

24 Dasent, Arthur Irwin, Piccadilly in Three Centuries: With Some Account of Berkeley Square and the Haymarket (London, 1920), 84.

27 To discuss business of any sort save politics was not only considered bad form but was actually an infringement of the rules at a gentlemen's club. Even the East India United Service, a somewhat lesser status gentlemen's club, was adamant in the fact that no business transactions were to take place at the club; see The Rules and Regulations of the East India United Service Club (London, 1890), 32.

28 “The Club as a Social Organism,” Club News, 28 January 1911, 3. More work certainly needs to be done on the relationship of workingmen's clubs with the home and family.

30 The National Liberal Club, with such a soaring membership, was on the border between a middle-class and gentlemen's club.

37 Sarah Luria, “The Architecture of Manners: Henry James, Edith Wharton and the Mount,” in Bryden and Floyd, Domestic Space, 187.

38 The chronicler of Brooks's pointed with pride to its “refined, if somewhat solemn comfort” that did not need the size of the more modern clubhouses; see Alfred Benzon, Benzon's Black Book. A History of the Clubs of London, Baltimore and Washington (1891), 12–13; Wegg-Prosser, J. F., Memorials of Brooks's from the Foundation of the Club 1764 to the Close of the Nineteenth Century (London, 1906), xii.

43 Letter from Royal Automobile Club, 11 November 1912, Bonar Law Papers, 27/4/18, House of Lords Record Office. The idea that a man's first point of call was his club was echoed in popular fiction when a young woman awaiting the return of her fiancé assumes he has gone to his club when he does not immediately appear at her door; see Dixon, Ella Hepworth (Margaret Wynman), The Story of a Modern Woman (Peterborough, 2004), 119.

48 Waugh, Francis Gledstances, The Athenaeum Club and Its Associations (London, 1900), 91.

62 In the surviving diaries of the Prince of Wales between 1875 and 1877, the prince dined at clubs at least thirty-three times. The Marlborough functioned in that capacity most often: twenty-three times; see “Indexes to diary of King Edward VII,” EVII/D, Royal Archives, Windsor.

70 A detailed account of one such “wild night” survives from the Caledonian Club. Mr. A. H. Connell entered the club with some friends at one in the morning, and they proceeded to a small smoking room where they ordered refreshments. Included in the list were numerous orders of brandy and soda and six bottles of lager beer. The waiter attested that the group was very loud, not only shouting and singing, but also jumping around on the furniture. The men proceeded to throw beer at one another, the walls, and the carpet. They knocked over a glass table and the list of members from the mantelpiece, they damaged two settees, three armchairs, and a lampshade, and broke several glasses. The total estimate for damages was at least £20–25. Such behavior was considered far too rowdy for a gentlemen's club, and it was not typical—Connell resigned and was asked to pay for the damages; see the entries October 13 and October 20, 1909, in the “Committee Minute Book, December 6 1905–November 20 1917,” Caledonian Club Archives.

84 Moira Donald, “Tranquil Havens? Critiquing the Idea of Home as the Middle-Class Sanctuary,” in Bryden and Floyd, Domestic Space, 105.

86 Gunn, The Public Culture of the Victorian Middle Class, 92.

96 At many clubs to this day a “strangers’ room” exists in some form.

97 Thorne, Robert, “Places of Refreshment in the Nineteenth-Century City,” in Buildings and Society: Essays on the Social Development of the Built Environment, ed. King, Anthony D. (London, 1980), 232.

108 The reticence of the staff to question the intruder too closely is not to be wondered at, however. To not know a member by sight was considered a huge failing, even if the man had been absent many years or had changed his appearance—or even if he had been disfigured, which was not uncommon in service clubs; see An Old Fogey [pseud.], “The Club Staff,” chap. 5 of “Clubs and Clubmen,” serial, Pall Mall Gazette, 28 February 1903, 2.

109 This did not necessarily entail that 28,000 men were without a club; some would have been members of several clubs; see “The Deserted West-End: Twenty-One Clubs Closed,” Pall Mall Gazette, 19 August 1902, 6. The same journal a few years later compared the desertion of the residential districts with the empty palaces of Pall Mall; “London Clubland: Signs of Awakening,” Pall Mall Gazette, 6 September 1905, 6.

115 Most clubs typically had to resort to a wider group of clubs, however. While the East India United Service was the most common host for the members of the Oriental Club, they also exchanged with the Union, Windham, Conservative, Junior United Service, Arts, Caledonian, Naval and Military, and Garrick Clubs; see “Oriental Club Minute Books, 1879–1915,” LMA/4452/01/03/015–023, London Metropolitan Archives.

126 Sinha, Mrinalini, “Britishness, Clubbability, and the Colonial Public Sphere: The Genealogy of an Imperial Institution in Colonial India,” Journal of British Studies 40, no. 4 (2001): 499. The formation of clubs would be a good example of what David Cannadine sees as imperialists replicating the familiarity and domesticity of England throughout the world; see Ornamentalism: How the British Saw Their Empire (New York, 2001), xix.

127 Imperial clubland is a topic that requires greater research but is beyond the scope of this project; see Ivey, George James, Clubs of the World: A General Guide or Index to the London and County Clubs and Those of Scotland, Wales, Ireland, United Kingdom Yacht Clubs, and British Colonial Possessions, Together with the English and Other Clubs in Europe, the United States, and Elsewhere throughout the World, 2nd ed. (London, 1880), iii.

A Flight to Domesticity? Making a Home in the Gentlemen's Clubs of London, 1880–1914