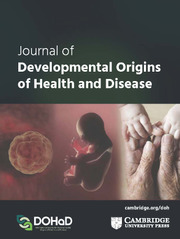 Journal of Developmental Origins of Health and Disease

An adverse early life environment is associated with increased cardiovascular disease in offspring. Work in animal models has shown that maternal undernutrition (UN) during pregnancy leads to hypertension in adult offspring, with effects thought to be mediated in part via altered renal function. We have previously shown that growth hormone (GH) treatment of UN offspring during the pre-weaning period can prevent the later development of cardiometabolic disorders. However, the mechanistic basis for these observations is not well defined. The present study examined the impact of GH treatment on renal inflammatory markers in adult male offspring as a potential mediator of these reversal effects. Female Sprague-Dawley rats were fed either a chow diet fed ad libitum (CON) or at 50% of CON intake (UN) during pregnancy. All dams were fed the chow diet ad libitum during lactation. CON and UN pups received saline (CON-S/UN-S) or GH (2.5 µg/g/day; CON-GH/UN-GH) from postnatal day 3 until weaning (p21). Post-weaning males were fed a standard chow diet for the remainder of the study (150 days). Histological analysis was performed to examine renal morphological characteristics, and gene expression of inflammatory and vascular markers were assessed. There was evidence of renal hypotrophy and reduced nephron number in the UN-S group. Tumour necrosis factor-α, monocyte chemoattractant protein-1 (MCP-1), intercellular adhesion molecular-1 and vascular cell adhesion molecule-1 gene expression was increased in UN-S offspring and normalized in the UN-GH group. These findings indicate that pre-weaning GH treatment has the potential to normalize some of the adverse renal and cardiovascular sequelae that arise as a consequence of poor maternal nutrition.