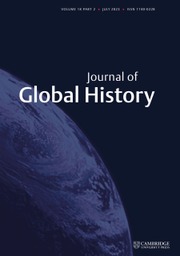 Another America: Russian mental discoveries of the North-west Pacific region in the eighteenth and early nineteenth centuries*

This article explores Russian perceptions of ‘America’ as they emerged in the eighteenth century when traders, explorers, and scholars approached the North American continent from the Pacific side. It argues that these perceptions were fundamentally different from the European mental discovery of America via the Atlantic. Rather than imagining a ‘new world’, the protagonists saw the north-west American coastline as a part of the North Pacific basin, which, in turn, was considered a part of the Russian empire. Only in the early nineteenth century did Russian geographic and cultural concepts change, becoming more similar to those of Europeans and to contemporary ideas of continents and global structures.

1 Miller, Gwenn, Kodiak Kreol: communities of empire in early Russian America, Ithaca, NY: Cornell University Press, 2010, p. xGoogle Scholar. To a contemporary journalist, Russian America is ‘oxymoronic-sounding’: see Gerald Warner, ‘Russia sabre-rattles over the Arctic – and Alaska is Sarah Palin territory’, Daily Telegraph, 14 May 2009, http://blogs.telegraph.co.uk/news/geraldwarner/9794367/Russia_sabrerattles_over_the_Arctic__and_Alaska_is_Sarah_Palin_territory (consulted 26 August 2011). Of course, most ‘serious’ publications do not express this sentiment as clearly as the children's section on the Fort-Ross-State Park's website: ‘Why in the world did the Russians come here? After all, California is a long way from Russia! In fact from the Company's headquarters in St Petersburg to Fort Ross it is 5,610 miles! That is more than two times the distance from New York to Fort Ross’ (http://www.fortrossstatepark.org/kidhistory.htm (consulted 27 July 2010)).

5 In this article, the Library of Congress transliteration of Russian is followed.

19 For enlightening information as to the origins and social structure of this group, see Black, Lydia, ‘Promyshlenniki … who were they?’, in Frost, Orcutt J., ed., Bering and Chirikov: the American voyages and their impact, Anchorage, AK: Alaska Historical Society, 1992, pp. 279–90Google Scholar.

27 In fact, Baranov seems to have tested several arguments in order to convince Emperor Paul of the necessity of a Russian colony in America. The (novel) ceremonies of taking possession were tailored according to western European models. In a similar way, the images of ‘Baranov's song’ were borrowed from western European concepts of the ‘New World’. See Baranov, Aleksandr, ‘Pesn’ia (Song)’, in Fedorova, Svetlana, ed., Russkaia Amerika v ‘zapiskakh’ K. T. Khlebnikova (Russian America in the ‘notes’ of K. T. Khlebnikov), Moscow: Nauka, 1985, pp. 221–2Google Scholar.

30 For the concept of ‘marvel’ as a key phenomenon of Spanish and Portuguese conquest, see Greenblatt, Stephen, Marvelous possessions, the wonder of the New World, Chicago, IL: University of Chicago Press, 1991CrossRefGoogle Scholar.

39 ‘Predlozhenie A. I. Chirikova, podannoe v Admiralteistv–kollegiiu (A. I. Chirikov's proposition presented to the Admiralty Board)’, in Divin, Russkaia Tikhookeanskaia epopeia, pp. 177–9. The Russian attitude of caution and concern not to get caught up in conflicts about colonial ambitions becomes clear in several documents, for instance ‘Iz donosheniia Senata Ekaterine I (From the Senate's report to Catherine I)’, in ibid., pp. 134–9.

41 Shelikhov, Rossiiskogo kuptsa Georgiia Shelikhova, p. 71. One of the very few exceptions, where a search for rivers turning inland was planned, is recorded in ‘1788 februar Proshenie kompanionov Golikova i Shelikhova (A petition forwarded by the partners Golikov and Shelikhov, February 1788)’, in Andreev, Russkie otkrytiia, pp. 265–9.

45 In contrast, the British did debate the maritime character of their nation intensely: see, for instance, Quilley, Geoff, ‘All ocean is her own: the image of the sea and the identity of the maritime nation in eighteenth-century British art’, in Cubitt, Geoffrey, ed., Imagining nations, Manchester: Manchester University Press, 1998, pp. 132–52Google Scholar; Armitage, David, ‘The elephant and the whale: empires of land and sea’, Journal for Maritime Research, 1, 2007, pp. 23–36Google Scholar.

51 In the English translation, the last letter of the word ‘archipelago’ is placed neatly a few sea miles off the American continent.

52 For instance, an anonymous chart from 1632, in Suárez, Thomas, Early mapping of the Pacific: the epic story of seafarers, adventurers and cartographers who mapped the earth's greatest ocean, Singapore: Tuttle Publishing, 2004, pp. 100–101Google Scholar.

60 The seemingly sketchy character of Shelikhov's map, which appears to imply that the map has simply not been finished, is belied by the obviously carefully designed cartouche. A very similar style is found in ‘Karta Zaikova k Plavaniiam s 1772 po 1779 gg (Zaikov's map for the voyages from 1772 to 1779)’, in Efimov, Atlas geograficheskikh otkrytii, No. 160.

65 Except by Andreev, briefly in a footnote: Andreev, Russkie otkrytiia, p. 72.

74 Some details of this process were described by Bolkhovitinov, The beginnings, p. 168.

80 ‘Mnenie leitenanta Khvosteva (Opinion of Lieutenant Khvostev)’, in Bil’basov, Arkhiv Grafov Mordvinovykh, vol. 3, pp. 571–86. A very good analysis of the complexities and entanglements of the Alaskan colonial societies in the early nineteenth century can be found in Vinkovetsky, Russian America.

89 Vinkovetsky, ‘Circumnavigation’; Aleksei V. Postnikov, ‘The first Russian voyage around the world and its influence on the exploration and development of Russian America’, Terrae Incognitae: the Journal for the History of Discoveries, 37, 2005, pp. 53–62.

101 For a list and discussion of those reasons, see Grinev, Andrei V., ‘Russian politarism as the main reason for the selling of Alaska’, in Matsuzato, Kimitaka, ed., Imperiology: from empirical knowledge to discussing the Russian empire, Hokkaido: Slavic Research Centre, Hokkaido University, 2007, pp. 245–58Google Scholar.

Another America: Russian mental discoveries of the North-west Pacific region in the eighteenth and early nineteenth centuries*
×

Another America: Russian mental discoveries of the North-west Pacific region in the eighteenth and early nineteenth centuries*
×

Another America: Russian mental discoveries of the North-west Pacific region in the eighteenth and early nineteenth centuries*
×
×