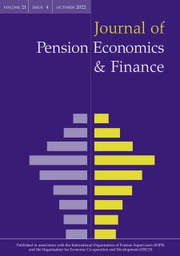 When a private pension plan sponsor with an underfunded plan becomes insolvent, the difference between the value of the plan's assets and its termination liabilities represents a liability for the Pension Benefit Guaranty Corporation (PBGC). Hence, accurately modeling the joint statistical distribution over time of defined benefit pension underfunding and sponsor terminations is critical for estimating PBGC's prospective cash flows and evaluating its financial position. It appears that the current Pension Insurance Modeling System (PIMS) approach to modeling risk does a reasonable job of capturing its statistical properties effects on PBGC cash flows, although some of the aspects might be improved, and metrics expanded. The present paper outlines, how an option-based approach to modeling the joint distribution of defaults and underfunding in PIMS might be implemented, while preserving the strengths of the current model. Moving to an option-based approach would allow PIMS to be used to estimate the fair values of future liabilities. Such an approach could have a significant effect on the perceived financial position of PBGC.

The research reported herein was pursuant to a grant from the U.S. Social Security Administration (SSA) funded as part of the Retirement Research Consortium (RRC); the author also acknowledges support from The Pension Research Council at The Wharton School. All findings and conclusions expressed are solely those of the author and do not represent the views of the SSA or any agency of the federal government, the MRRC, the PRC, or The Wharton School at the University of Pennsylvania.