From “Economic Want” to “Family Pathology”: Foster Family Care, the New Deal, and the Emergence of a Public Child Welfare System 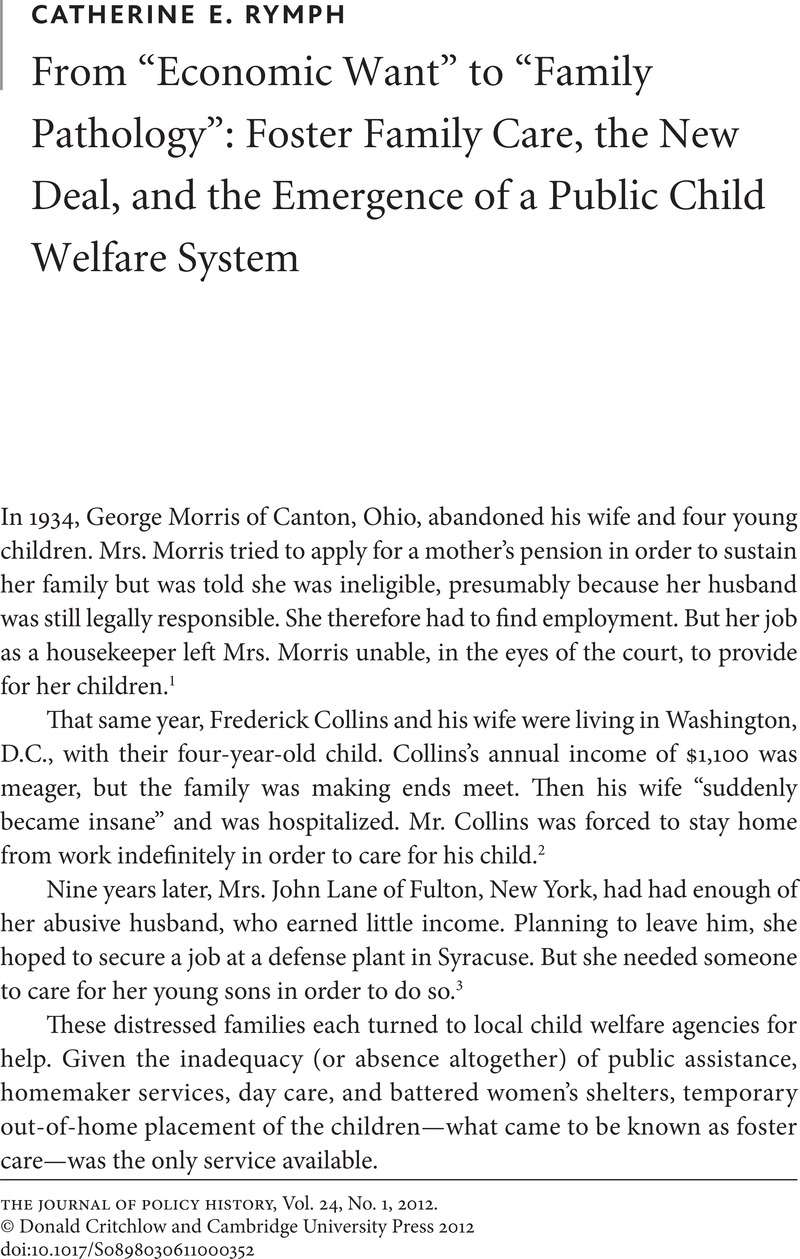 4. I base my assessment of the network’s general views on my readings of published articles, correspondence, speeches, best-practices manuals, and other writings. For a more thoroughgoing examination of this network and its ideas after World War II, see Ethan G. Sribnick, “Rehabilitating Child Welfare: Children and Public Policy, 1945–1980” (Ph.D. diss., University of Virginia, 2007).

8. For an overview of this scholarship, see Boris, Eileen, “On the Importance of Naming: Gender, Race, and the Writing of Policy History,” Journal of Policy History 17, no. 1 (2005), esp. pages75–82.CrossRefGoogle Scholar

9. Andrew Morris provides a valuable discussion of the relationship of private agencies to the development of public social services in Morris, Andrew J. F., The Limits of Volunteerism: Charity and Welfare from the New Deal Through the Great Society (New York, 2009).Google Scholar Morris’s focus is on Family Services agencies, which were different in important ways from Children’s Services agencies. Private child welfare agencies, for example, were more likely to be faith-based than were their family service counterparts, and were in a somewhat stronger financial position in the 1930s.

10. For a discussion of such practices in Brazil, see Claudia Fonseca, “The Circulation of Children in a Brazilian Working-Class Neighborhood: A Local Practice in a Globalized World,” in Cross-Cultural Approaches to Adoption, ed. Fiona Bowie (New York, 2004), 165–81.

14. The prime example of these rural free homes is the placing-out, or “orphan train” system, developed by Charles Loring Brace and the Children’s Aid Society in the mid-nineteenth century. See Irvin Holt, Marilyn, The Orphan Trains: Placing Out in America (Lincoln, Neb., 1994).Google Scholar

15. Standards produced by the Child Welfare League of America in 1933 defined “free homes” as those in which no money was given to the family and no payment was made by the family to children except an allowance; in “work homes,” the child worked for the family in return for board and lodging; in “wage homes,” the child received wages in exchange for services; and in “boarding homes,” foster parents received some payment for costs associated with boarding. Child Welfare League of America, Standards for Children’s Organizations Providing Foster Family Care, May 1933, folder 4, box 13, Child Welfare League of America Records, Social Welfare History Archive, Minneapolis. Hacsi, Tim, “From Indenture to Family Foster Care: A Brief History of Child Placing,” in A History of Child Welfare, ed. Smith, Eve P. and Merkel-Holguin, Lisa A. (New Brunswick, N.J., 1996), 167.Google Scholar

17. Part of the mistrust directed toward foster mothers was due to class. According to the recently sentimentalized view of childhood, children were not to bring income into the family—neither by their own labor nor as payment to those who cared for them. Zelizer, Viviana A., Pricing the Priceless Child: The Changing Social Value of Children (Princeton, 1985), 124.Google Scholar

26. Progressive Era maternalists advocated for “mothers’ pensions” that would enable deserving single mothers to care for their children at home, rather than leaving them poorly supervised in order to go to work or placing them in institutions. By 1935, forty-five states had some provision for mothers’ pensions. Stipends were deliberately set low, and there remained critical gaps in service, particularly in rural areas, including the Deep South. African American families were rarely included in reformers’ visions, partly because they lived primarily in the rural South, partly because they were never foremost on the minds of white reformers to begin with. On mothers’ pensions, see Nelson, Barbara J., “The Origins of the Two-Channel Welfare State: Workmen’s Compensation and Mothers’ Aid,” in Women, the State, and Welfare, ed. Gordon, Linda (Madison, Wisc., 1989), 123–51Google Scholar; Mink, Gwendolyn, The Wages of Motherhood: Inequality in the Welfare State, 1917–1942 (Ithaca, N.Y., 1995)Google Scholar; Gordon, Linda, Pitied but Not Entitled: Single Mothers and the History of Welfare (Cambridge, Mass., 1994)Google Scholar; Ladd-Taylor, Molly, Mother Work: Women, Child Welfare, and the State, 1890–1930 (Urbana, Ill., 1994).Google Scholar

27. The director of the Social Security Board’s Bureau of Public Assistance concluded in 1939 that only “a fraction” of needy children was being reached by new federal programs, although it was impossible to determine precisely how many. Hoey, Jane M., “Aid to Families with Dependent Children,” Annals of the American Academy of Political and Social Sciences (March 1939), 74–78.CrossRefGoogle Scholar

34. Case 1283, Folder 41627, box 20, Minneapolis Family and Children Services records. All names from this case record have been changed.

40. For example, see Martin Wolins, “Research Proposal,” 6 September 1957, folder 4, box 20, CWLA records: “The growth of social insurances and public assistance coverage has resulted in a marked reduction of the number of children who come under care of an agency due to economic inadequacy of their homes.”

44. In 1965, there were only about 79,000 dependent children living in institutions, a marked decrease since the 140,000 living in institutions in 1933. In 1965, 78 percent of children in foster family care were under the care of publicly funded agencies. Seth Low, “Foster Care of Children, Major National Trends and Prospects,” Welfare in Review (October 1966): 12–13; Children and Youth in America, ed. Robert Bremner, 634.

60. Like foster mothers, professional “homemakers” provided, under the auspices of child welfare agencies, physical care, guidance, and emotional support to children who were not theirs biologically. Homemaker service programs as a child welfare service emerged in the 1920s and began to expand in the 1950s, although this strategy for allowing children to remain in their homes was never adequately developed. Child Welfare League of America, Standards for Homemaker Service for Children (New York, 1959), 5-6; see Boris, Eileen and Klein, Jennifer, Caring for America: Home Health Workers in the Shadow of the Welfare State (forthcoming, Oxford, 2012), chaps. 1 and 2.CrossRefGoogle Scholar

From “Economic Want” to “Family Pathology”: Foster Family Care, the New Deal, and the Emergence of a Public Child Welfare System
×

From “Economic Want” to “Family Pathology”: Foster Family Care, the New Deal, and the Emergence of a Public Child Welfare System
×

From “Economic Want” to “Family Pathology”: Foster Family Care, the New Deal, and the Emergence of a Public Child Welfare System
×
×