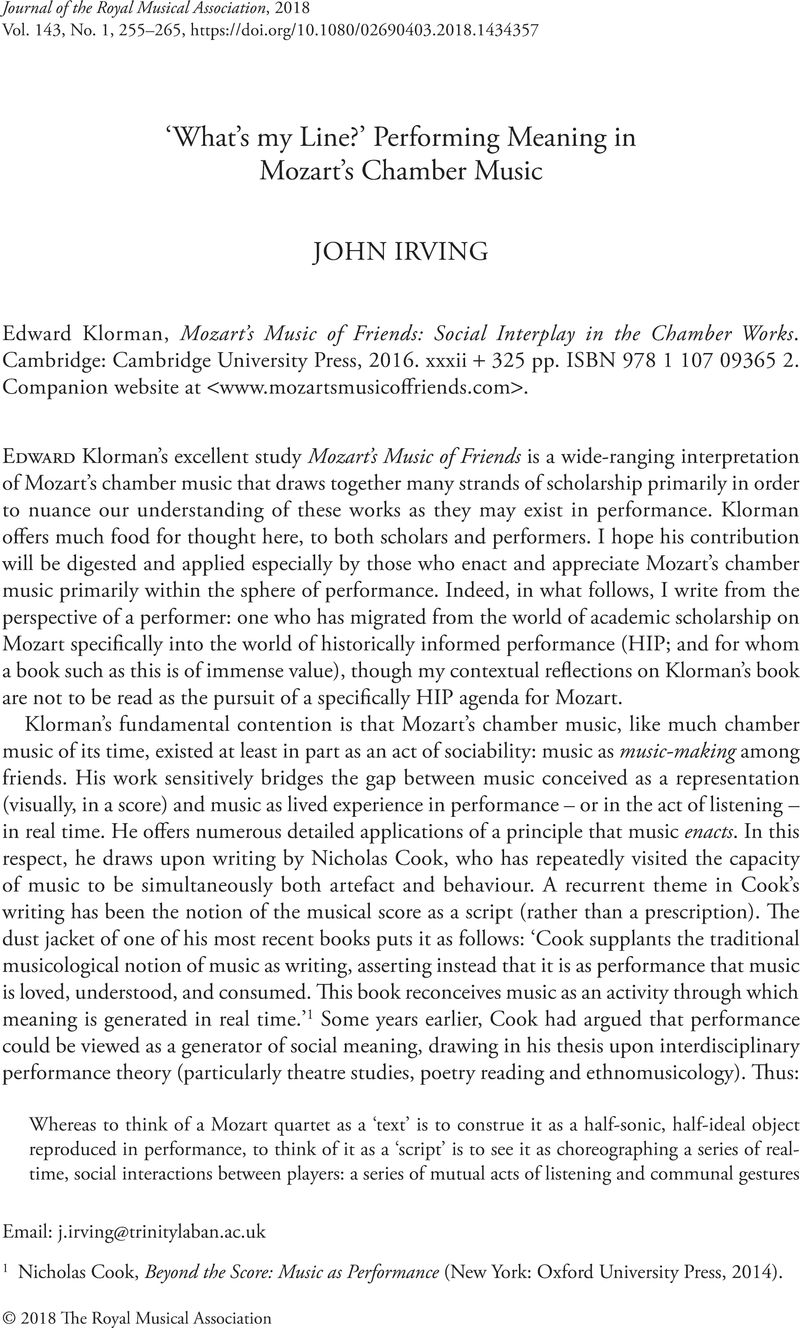 6 I understand that Klorman became aware of my ‘Kegelstatt’ DVD only at a very late stage in the production of his book; while it is referenced there, his exploration of multiple agency and my own similar explorations on film are independent. Our physical disposition in the DVD closely resembles, however, the picture represented in Klorman's Fig. 1.3 (on p. 8), as we are facing inwards and conversing with each other, rather than declaiming into a concert hall.

8 For instance, his musical examples do not deal with variant readings of dynamics and articulations between different early sources (which might suggest to performers contrasting ways of imagining and subsequently creating a conversational narrative in rehearsal or performance), but takes a single authoritative source (for example, from the Neue Mozart Ausgabe) as a single conceptual reference.

9 This is especially the case if the parts have no rehearsal letters or bar numbers, in which case musically sensible reference points (cadences, a change of key, the recapitulation of a significant theme and so on) become the only usable landmarks.

11 Ironically, perhaps, the notion that a piece of music exists absolutely, intrinsically, is encountered routinely in programme notes and CD sleeve notes – two circumstances in which the sound of the music, created by performers performing meaning in real time, is paramount.

14 Schoenberg's example connects the phrase through to the first crotchet of bar 8, probably following the text of Wolfgang Amadeus Mozart's Werke: Kritisch durchgesehene Gesammtausgabe, series 14: Quartette für Streichinstrumente (Leipzig: Breitkopf & Härtel, 1881–2), 168–85 (p. 173); in the autograph, Mozart connects the three dotted minims, and separates the final crotchet in the violin 2 part, but connects through to the end of the phrase in the viola.

Journal of the Royal Musical Association
×
Powered by UNSILO

Journal of the Royal Musical Association
×