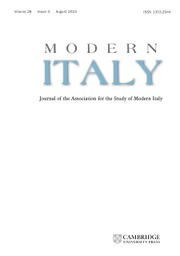 Amici fragili: the alliance between the Lega Nord and the Popolo della Libertà as seen by their representatives and members

The alliance between the Lega Nord (LN) and Forza Italia (FI), later Popolo della Libertà (PDL), continued, uninterrupted, for over a decade, until November 2011. The problems that beset it under the fourth Berlusconi government are known; however, there is a lack of academic analysis of how such an alliance was seen and experienced by the people who made up the fabric of its constituent organisations. Based on interviews with institutional representatives and members from both parties, this article addresses the question of how people within them saw their ally and its leaders, and what they thought of the centre-right alliance under the fourth Berlusconi government. The analysis reveals that, although the LN's rhetoric, style and uncompromising stances on policy were the target of much criticism within the PDL, the latter nonetheless showed much respect for its ally, the way it was led, its ability to communicate effectively and its rootedness at the local level. However, LN members and representatives were, in turn, extremely critical of the PDL and its leader, and very much conceived of the alliance as a ‘marriage of convenience’. This notwithstanding, it is reasonable to expect that the PDL and the LN may find ways to rebuild their alliance in the future, if indeed the PDL continues to exist in its present form, due to their fundamental compatibility at the ideological level and their understanding of each other's priorities.

De Giorgi, Elisabetta and Dias, António 2020. Divided, but not by much: The parties of the centre right between government and opposition. Contemporary Italian Politics, Vol. 12, Issue. 2, p. 169.
Google Scholar Citations

Amici fragili: the alliance between the Lega Nord and the Popolo della Libertà as seen by their representatives and members
×

Amici fragili: the alliance between the Lega Nord and the Popolo della Libertà as seen by their representatives and members
×

Amici fragili: the alliance between the Lega Nord and the Popolo della Libertà as seen by their representatives and members
×
×