Rechargeable lithium-sulfur (Li-S) batteries with elemental sulfur and lithium metal as cathode and anode, respectively, are promising electrochemical energy-storage devices with energy densities 3–5 times higher than those of rechargeable Li-ion batteries. However, the practicality of Li-S batteries is significantly compromised by their short lifetimes that are mainly associated with polysulfides, the intermediate products formed during cycling. Once formed, these electrolyte-soluble species diffuse to the Li metal anodes and deposit as Li2S on the Li surface. The deposition passivates Li and reduces the concentration of Li+ available for electricity storage. Therefore, developing methods to prevent polysulfide diffusion to Li anodes is crucial for addressing the implementation challenge for the Li-S battery.

In APL Materials (doi:10.1063/1.5122819), Bo Wang and co-workers of the Beijing Institute of Technology, China, describe a cobalt phosphide/porous carbon composite (PZ67) that prevents the leaking of polysulfides into the electrolyte. The PZ67 composite results in Li-S batteries with a high capacity (a metric for quantifying electricity-storage capability) that goes beyond 300 charge-discharge cycles.

According to the first author, Xing Gao, the purpose of this work was to utilize polar compounds and porous carbon networks to trap polysulfides. To realize this goal, the researchers selected ZIF-67, a type of cobalt-containing metal–organic framework (MOF), as a starting material. MOFs are crystalline coordination compounds consisting of metal ions or clusters and organic ligands. Through thermal annealing and phosphidation by NaH2PO4 under N2 atmosphere, ZIF-67 was converted to cobalt monophosphide (CoP) nanoparticles wrapped with N-doped mesoporous carbon matrices. 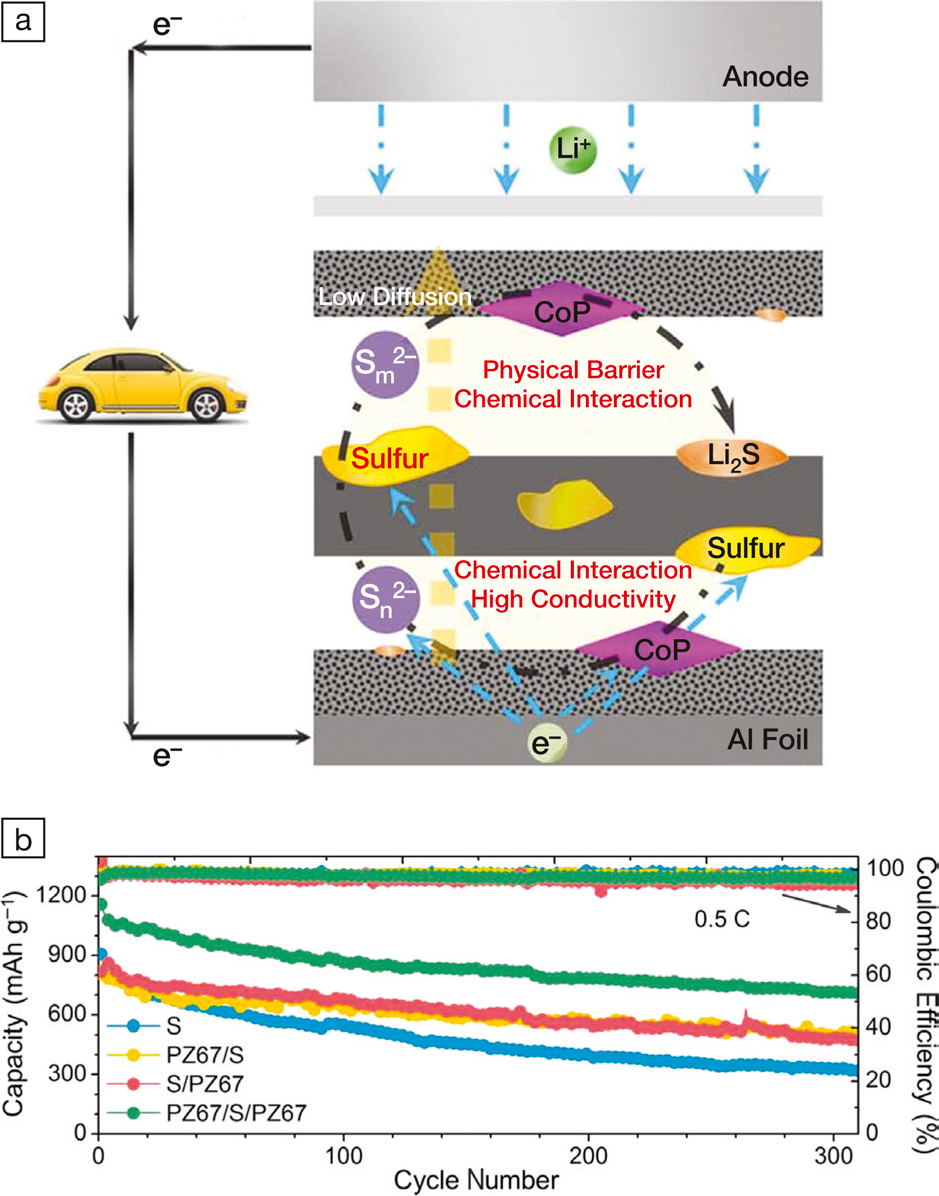 The PZ67 composite functioned as a “cage” to confine polysulfides near sulfur. Specifically, sulfur was sandwiched between two pieces of PZ67 but remained accessible to Li+ through the mesoporous carbon, and the carbon matrices could transport electrons to sulfur, which ensured the functionality of sulfur. Congruently, polysulfides anchored by the polar CoP nanoparticles and adsorbed in the carbon mesopores were immobile, which prevented the shuttling of polysulfide to Li metal. A Li-S battery with a PZ67-sandwiched sulfur electrode retained a high capacity of 715 mAh g–1 (at 0.5 C charge-discharge rate after 300 charge-discharge cycles), a value appreciably higher than those of bare (330.5 mAh g–1), PZ67-covered (489.2 mAh g–1), and PZ67-supported (481.6 mAh g–1) sulfur cathodes under identical testing conditions.

Wei Luo, a professor in the School of Materials Science and Engineering at Tongji University, China, says that “this work presents an excellent example of the critical role of preparing novel electrode materials or structures in propelling the development of Li-S chemistry.” Luo was not involved in this work.

The researchers are actively seeking ways to expand the impact of this work. “We want to scale up the fabrication process of the hybrid sulfur electrode using a hot-pressing method,” Gao says. The researchers are also investigating strategies for making Li anodes polysulfide-resistant to boost the lifetimes of Li-S batteries.