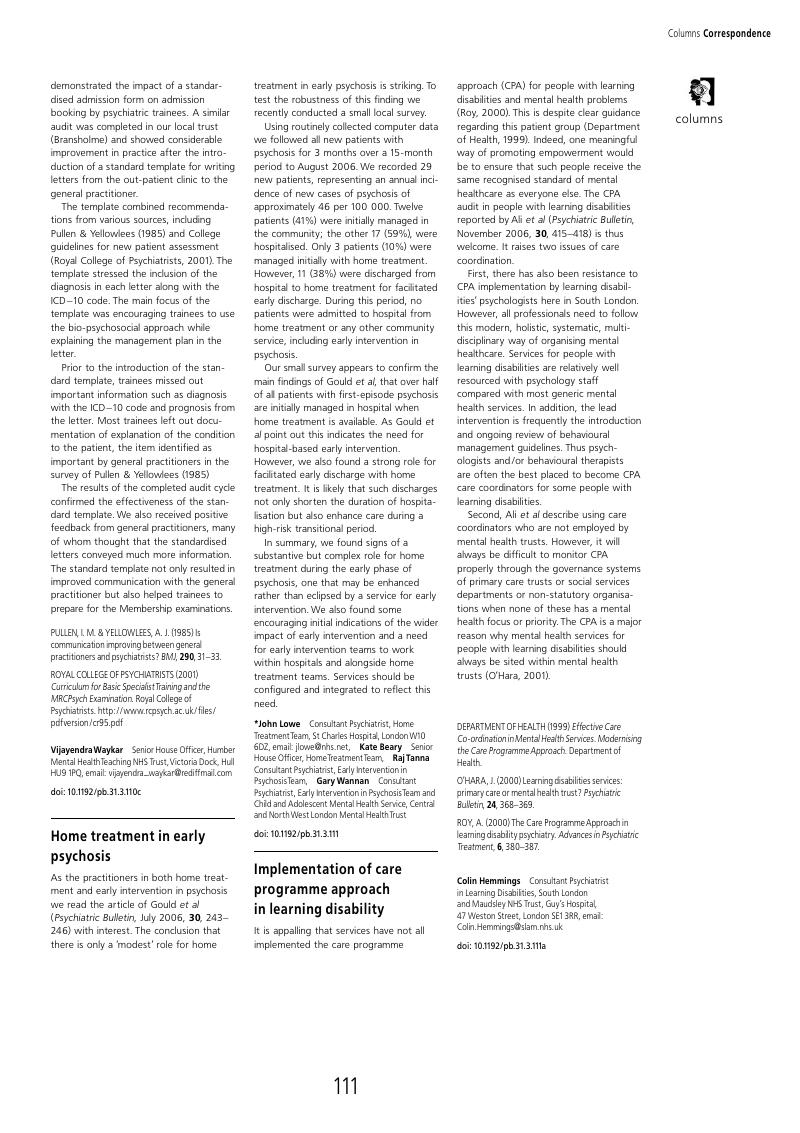 An abstract is not available for this content so a preview has been provided. To view the full text please use the links above to select your preferred format.
Type
Columns
Information
Psychiatric Bulletin , Volume 31 , Issue 3 , March 2007 , pp. 111
DOI: https://doi.org/10.1192/pb.31.3.111[Opens in a new window]
Creative Commons
This is an Open Access article, distributed under the terms of the Creative Commons Attribution (CC-BY) license (http://creativecommons.org/licenses/by/4.0/), which permits unrestricted re-use, distribution, and reproduction in any medium, provided the original work is properly cited.
Copyright
Copyright © Royal College of Psychiatrists, 2007

As the practitioners in both home treatment and early intervention in psychosis we read the article of Gould et al (Psychiatric Bulletin, July 2006, 30, 243–246) with interest. The conclusion that there is only a ‘modest’ role for home treatment in early psychosis is striking. To test the robustness of this finding we recently conducted a small local survey.

Using routinely collected computer data we followed all new patients with psychosis for 3 months over a 15-month period to August 2006. We recorded 29 new patients, representing an annual incidence of new cases of psychosis of approximately 46 per 100 000. Twelve patients (41%) were initially managed in the community; the other 17 (59%), were hospitalised. Only 3 patients (10%) were managed initially with home treatment. However, 11 (38%) were discharged from hospital to home treatment for facilitated early discharge. During this period, no patients were admitted to hospital from home treatment or any other community service, including early intervention in psychosis.

Our small survey appears to confirm the main findings of Gould et al, that over half of all patients with first-episode psychosis are initially managed in hospital when home treatment is available. As Gould et al point out this indicates the need for hospital-based early intervention. However, we also found a strong role for facilitated early discharge with home treatment. It is likely that such discharges not only shorten the duration of hospitalisation but also enhance care during a high-risk transitional period.