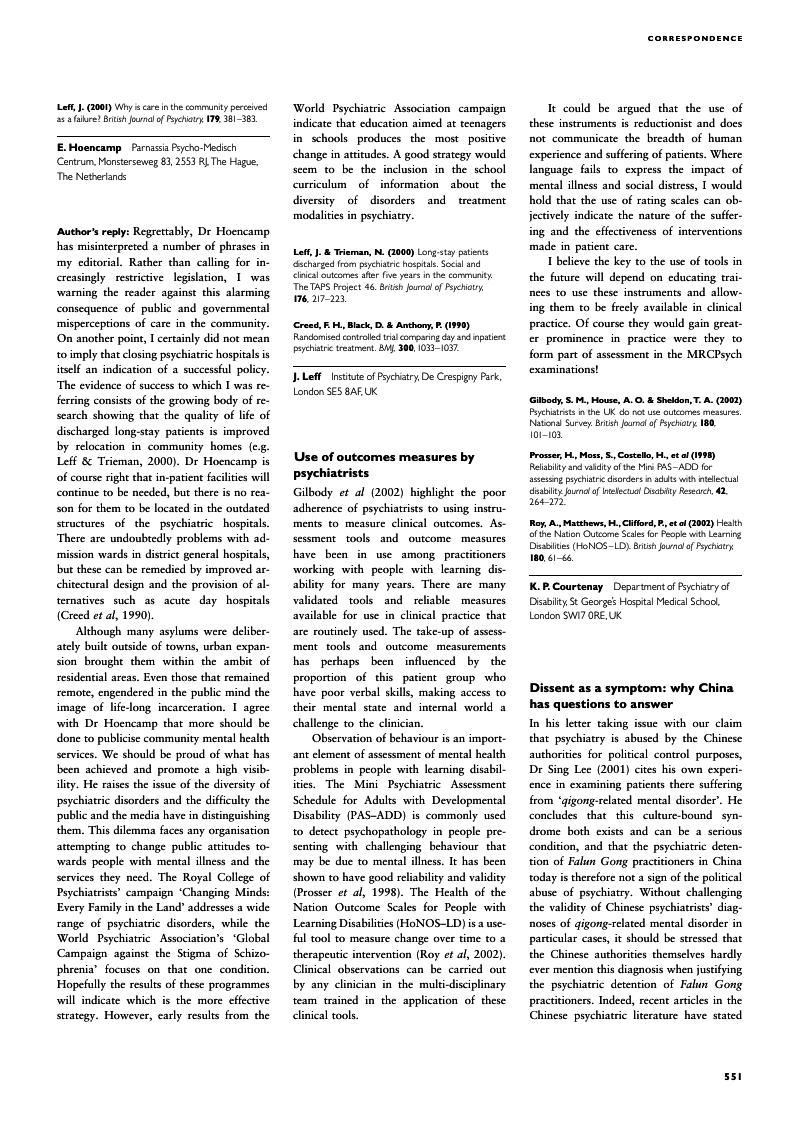 An abstract is not available for this content so a preview has been provided. To view the full text please use the links above to select your preferred format.
Type
Columns
Information
The British Journal of Psychiatry , Volume 180 , Issue 6 , June 2002 , pp. 551
DOI: https://doi.org/10.1192/bjp.180.6.551[Opens in a new window]
Copyright
Copyright © 2002 The Royal College of Psychiatrists

Regrettably, Dr Hoencamp has misinterpreted a number of phrases in my editorial. Rather than calling for increasingly restrictive legislation, I was warning the reader against this alarming consequence of public and governmental misperceptions of care in the community. On another point, I certainly did not mean to imply that closing psychiatric hospitals is itself an indication of a successful policy. The evidence of success to which I was referring consists of the growing body of research showing that the quality of life of discharged long-stay patients is improved by relocation in community homes (e.g. Reference Creed, Black and AnthonyLeff & Trieman, 2000). Dr Hoencamp is of course right that in-patient facilities will continue to be needed, but there is no reason for them to be located in the outdated structures of the psychiatric hospitals. There are undoubtedly problems with admission wards in district general hospitals, but these can be remedied by improved architectural design and the provision of alternatives such as acute day hospitals (Creed et al, 1990).

Although many asylums were deliberately built outside of towns, urban expansion brought them within the ambit of residential areas. Even those that remained remote, engendered in the public mind the image of life-long incarceration. I agree with Dr Hoencamp that more should be done to publicise community mental health services. We should be proud of what has been achieved and promote a high visibility. He raises the issue of the diversity of psychiatric disorders and the difficulty the public and the media have in distinguishing them. This dilemma faces any organisation attempting to change public attitudes towards people with mental illness and the services they need. The Royal College of Psychiatrists' campaign ‘Changing Minds: Every Family in the Land’ addresses a wide range of psychiatric disorders, while the World Psychiatric Association's ‘Global Campaign against the Stigma of Schizophrenia’ focuses on that one condition. Hopefully the results of these programmes will indicate which is the more effective strategy. However, early results from the World Psychiatric Association campaign indicate that education aimed at teenagers in schools produces the most positive change in attitudes. A good strategy would seem to be the inclusion in the school curriculum of information about the diversity of disorders and treatment modalities in psychiatry.