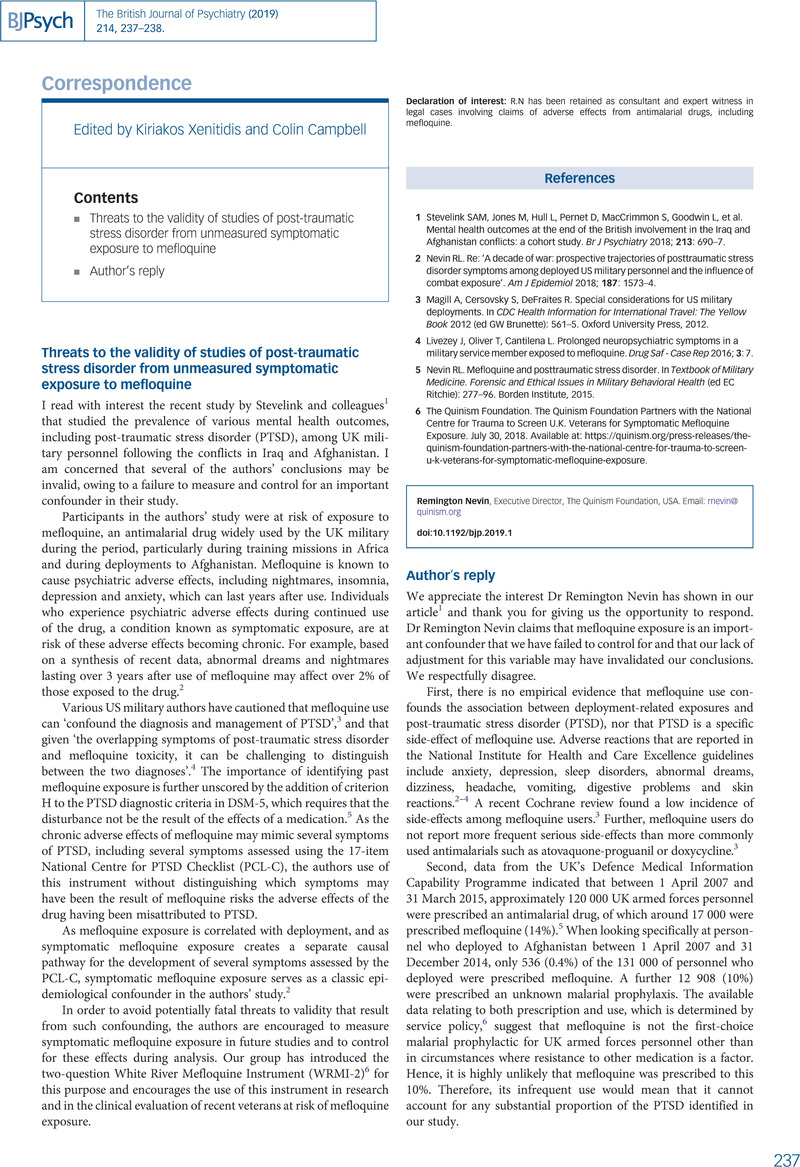 An abstract is not available for this content so a preview has been provided. To view the full text please use the links above to select your preferred format.
Type
Correspondence
Information
The British Journal of Psychiatry , Volume 214 , Issue 4 , April 2019 , pp. 237
DOI: https://doi.org/10.1192/bjp.2019.1[Opens in a new window]
Copyright
Copyright © The Royal College of Psychiatrists 2019

I read with interest the recent study by Stevelink and colleaguesReference Stevelink, Jones, Hull, Pernet, MacCrimmon and Goodwin1 that studied the prevalence of various mental health outcomes, including post-traumatic stress disorder (PTSD), among UK military personnel following the conflicts in Iraq and Afghanistan. I am concerned that several of the authors' conclusions may be invalid, owing to a failure to measure and control for an important confounder in their study.

Participants in the authors’ study were at risk of exposure to mefloquine, an antimalarial drug widely used by the UK military during the period, particularly during training missions in Africa and during deployments to Afghanistan. Mefloquine is known to cause psychiatric adverse effects, including nightmares, insomnia, depression and anxiety, which can last years after use. Individuals who experience psychiatric adverse effects during continued use of the drug, a condition known as symptomatic exposure, are at risk of these adverse effects becoming chronic. For example, based on a synthesis of recent data, abnormal dreams and nightmares lasting over 3 years after use of mefloquine may affect over 2% of those exposed to the drug.Reference Nevin2

Various US military authors have cautioned that mefloquine use can ‘confound the diagnosis and management of PTSD’,Reference Magill, Cersovsky, DeFraites and Brunette3 and that given ‘the overlapping symptoms of post-traumatic stress disorder and mefloquine toxicity, it can be challenging to distinguish between the two diagnoses’.Reference Livezey, Oliver and Cantilena4 The importance of identifying past mefloquine exposure is further unscored by the addition of criterion H to the PTSD diagnostic criteria in DSM-5, which requires that the disturbance not be the result of the effects of a medication.Reference Nevin and Ritchie5 As the chronic adverse effects of mefloquine may mimic several symptoms of PTSD, including several symptoms assessed using the 17-item National Centre for PTSD Checklist (PCL-C), the authors use of this instrument without distinguishing which symptoms may have been the result of mefloquine risks the adverse effects of the drug having been misattributed to PTSD.

In order to avoid potentially fatal threats to validity that result from such confounding, the authors are encouraged to measure symptomatic mefloquine exposure in future studies and to control for these effects during analysis. Our group has introduced the two-question White River Mefloquine Instrument (WRMI-2)6 for this purpose and encourages the use of this instrument in research and in the clinical evaluation of recent veterans at risk of mefloquine exposure.

R.N has been retained as consultant and expert witness in legal cases involving claims of adverse effects from antimalarial drugs, including mefloquine.

Nevin, Remington L 2019. Mefloquine exposure as a cause of sleep disorders among US military personnel and veterans. Sleep, Vol. 42, Issue. 9,
Google Scholar Citations