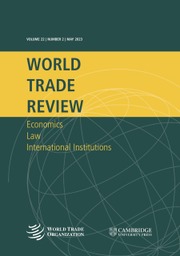 On January 16, 2003, the WTO Appellate Body (AB) issued its report on the appeal by the United States (US) of the Panel decision in United States – Continued Dumping and Subsidy Offset Act of 2000. The report concerns the consistency of the United States Continued Dumping and Subsidy Offset Act of 2000 (the “CDSOA,” or the so-called Byrd Amendment) with several WTO provisions. This legislation requests the federal state to distribute proceeds from antidumping and countervailing duties to all US economic operators that have supported a request previously submitted to the ratione materiae competent US authority to investigate alleged dumping or subsidization. The appeal was directed against the Panel’s finding that the Byrd legislation was inconsistent with the US obligations under the WTO Antidumping Agreement (AD), and the Agreement on Subsidies and Countervailing Measures (SCM). A total of 11 complainants (Australia, Brazil, Canada, Chile, the European Community, India, Indonesia, Japan, Korea, Mexico, and Thailand), and five additional third parties (Argentina, Costa Rica, Hong Kong (China), Israel, and Norway), evidence the interest among WTO Members in the issues at stake in the dispute.