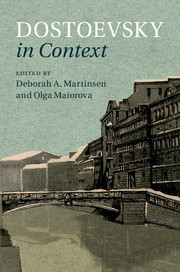 Dostoevsky wrote during a period in which literary translation had taken on new importance in Russia. During the eighteenth century and the first three decades of the nineteenth century, the French language's unique role as a medium of social communication among the upper classes meant that works of French literature were more likely to be read in the original than in Russian translation. Works of other traditions also made their way into Russia via French translations. As Russian readers began to note other literary trends, particularly German Romanticism and the Gothic, translation served as a vehicle for bringing foreign works into Russia, offering new literary models, and conveying information about life abroad. Translator-poets such as Vasily Zhukovsky imported works of German Romantic poetry, and most prose writers tried their hand at translating as well, a practice that enabled them to develop their craft. Moreover, during the 1840s and 1850s, as writing became a profession, translation served as a source of income for young people with literary aspirations.

For Dostoevsky, translation in the 1840s was part of a life-and-literature dynamic involving money problems on one hand and a passion for fiction on the other. The young Dostoevsky was thus not all that different from the mature Dostoevsky, nor from many other writers of his generation. In deciding to resign his commission and devote himself to literature, the young military cartographer devised various translation projects from the French. Since many were translating during this time, eager to earn what small income the activity could provide, it was not unusual for more than one translator to be working on a text at the same time. Dostoevsky's plan to translate George Sand's La Dernière Aldini (1838), for example, came to naught when another translation appeared. To his brother Mikhail, he proposed translating and publishing Eugène Sue's novel Mathilde, ou les Mémoires d'une jeune femme (1841), farming out the novel in three parts to be translated by himself, Mikhail, and Dostoevsky's Academy of Engineers classmate Oskar Patton (28:83; Letters 1:79–80). The project did not lack a predatory element, for the novel had already been translated; the goal seemed to have been to scoop this existing, but not yet published, translation.