Home
Empires of the Mind

Empires of the Mind

The Colonial Past and the Politics of the Present 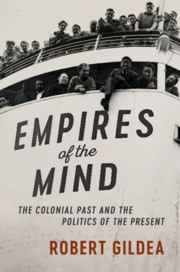 'The empires of the future would be the empires of the mind' declared Churchill in 1943, envisaging universal empires living in peaceful harmony. Robert Gildea exposes instead the brutal realities of decolonisation and neo-colonialism which have shaped the postwar world. Even after the rush of French and British decolonisation in the 1960s, the strings of economic and military power too often remained in the hands of the former colonial powers. The more empire appears to have declined and fallen, the more a fantasy of empire has been conjured up as a model for projecting power onto the world stage and legitimised colonialist intervention in Afghanistan, Iraq, and Syria. This aggression, along with the imposition of colonial hierarchies in metropolitan society, has excluded, alienated and even radicalised immigrant populations. Meanwhile, nostalgia for empire has bedevilled relations with Europe and played a large part in explaining Brexit.

'Empires of the Mind is a uniquely valuable account of the fate of the French and British empires.'

'Accessibly written and genuinely comparative, Robert Gildea's new analysis of the lingering effects and bitter aftershocks of British and French colonialism is essential reading for anyone keen to understand where legacies of empire register in contemporary politics. A terrific read.'

Martin Thomas - author of Fight or Flight: Britain, France and their Roads from Empire

‘Empires of the Mind is an exhilarating comparative survey of British and French self-regard from competitive collaboration in the hecatombs of slavery, through Suez in 1956, to responses to immigrants from ex-colonies, Islamic fundamentalism and Brexit. Among many startling quotes we read Nigel Farage claiming Brits are different from Europeans. Robert Gildea shows that we are too alike.’

‘The past never remains in the past, Robert Gildea skilfully reminds us as he recounts the brutal histories of both British and French colonial and neo-colonial ventures. This is a book that insists on the connections between what happens/ed ‘out there’ and what happens/ed ‘in here’ and helps us to think through that complex and dangerous entanglement, which continues to inform our contemporary politics today.’

Catherine Hall - author of Civilising Subjects: Metropole and Colony in the English Imagination 1830–1867

'Gildea uses a comparative approach to examine the legacy of empire in France and Britain … both countries desperately hoped to preserve their empires, fiercely resisted decolonization, and frequently intervened to keep former colonies as dependencies. … In France, the long shadow of the Algerian conflict, racism, and an emphasis on secular republican values led to a reassertion of colonial rule in the banlieues. Despite Britain’s avowed multiculturalism, its formerly colonized subjects faced segregation, exclusion, and violence at the hands of former colonizers. Alienated from both their adopted nation and their country of origin and enraged by the US’s neo-imperialist ‘war on terror', many in Europe’s immigrant community embraced Islam. A radicalized minority turned to jihad and terrorist violence. … the dubious but apparently widespread belief that Brexit would enable Britain to restore its free-trade empire supports Gildea's thesis that the past remains disturbingly present. Highly recommended.'

'A valuable and shaming book.'

‘… [Empires of the Mind] can … be profitably read for its extensive comparative account of the British and French empires and their afterlives … highly accessible.’

‘A grand narrative that tracks the resurgence of imperial and neo-colonial thinking since the end of the Cold War, which has provoked increased military interventions in the global South, the growing stigmatization of immigrant populations in the West, and the delusions of grandeur that have accompanied our own debates around Brexit.'