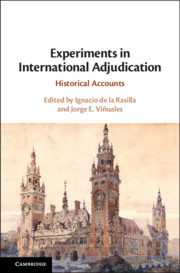 The history of international adjudication is all too often presented as a triumphalist narrative of normative and institutional progress that casts aside its uncomfortable memories, its darker legacies and its historical failures. In this narrative, the bulk of 'trials' and 'errors' is left in the dark, confined to oblivion or left for erudition to recall as a curiosity. Written by an interdisciplinary group of lawyers, historians and social scientists, this volume relies on the rich and largely unexplored archive of institutional and legal experimentation since the late nineteenth century to shed new light on the history of international adjudication. It combines contextual accounts of failed, or aborted, as well as of 'successful' experiments to clarify our understanding of the past and present of international adjudication.

‘Experiments in International Adjudication is an overdue and necessary complement to the burgeoning research on international courts and tribunals. The authors, outstanding experts, have shed light on so far unknown institutions, facets of seemingly familiar ones, and show how many of the 'experiments' failed, while others led to unforeseen results. This book fills a gap and will stimulate further investigations on the histories and functions, problems and potentials of eminently important institutions in international law and relations.'

‘This collection of fascinating essays on instances and experiments in international adjudication from the last two centuries significantly thickens the narrative of the historical emergence of present-day international courts and tribunals. By delving into the rich histories of failed or unfinished experiments with arbitral and judicial dispute settlement between states, the book shows that the recent proliferation and diversification of international adjudication has deep historical roots and that the disruptive effects these variations are often perceived to have on international law as a system, may actually be crucial to its endurance.'

‘This comprehensive volume follows a chronological approach and reveals the well-co-ordinated research carried out by this interdisciplinary group of eminent scholars. It critically recalls some underresearched 'strands of the historical record that can be seen as genuine 'trials' and 'errors' in the long process of experimentation relating to international adjudication', considering their intellectual, socio-political, and international legal context, connecting past and present experiments, and offering 'fresh perspectives on this usually 'neglected', but significant discipline' … This book makes a decisive contribution to the research and understanding of the history of international adjudication.’

‘Most readers will be enriched … will have learned about a new institution, an unknown conflict or case, or about missed opportunities in dispute settlement. … they taught me a lot (e.g. about Commonwealth and Maghreb tribunals) and often made me think.’