Home
The Hidden Rules of Race

The Hidden Rules of Race

Barriers to an Inclusive Economy 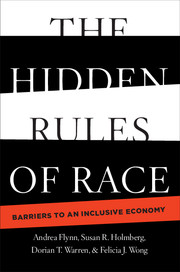 Why do black families own less than white families? Why does school segregation persist decades after Brown v. Board of Education? Why is it harder for black adults to vote than for white adults? Will addressing economic inequality solve racial and gender inequality as well? This book answers all of these questions and more by revealing the hidden rules of race that create barriers to inclusion today. While many Americans are familiar with the histories of slavery and Jim Crow, we often don't understand how the rules of those eras undergird today's economy, reproducing the same racial inequities 150 years after the end of slavery and 50 years after the banning of Jim Crow segregation laws. This book shows how the fight for racial equity has been one of progress and retrenchment, a constant push and pull for inclusion over exclusion. By understanding how our economic and racial rules work together, we can write better rules to finally address inequality in America.

'The Hidden Rules of Race shines an objective light on the discriminatory systems and structures that perpetuate disparities between black and white Americans. The authors’ call for a comprehensive reorientation of our perspective on economic and racial inequality is bold, timely, and deeply necessary for those of us who wish to build a more inclusive future.'

'Anyone focused on social change knows that there are a set of written and unwritten rules that incentivize and fortify the status quo. The work of social change - the work of undoing racism - is changing those rules. In The Hidden Rules of Race, the team at Roosevelt has created a clear and actionable analysis, instrumental to identifying some of the most important interventions we can make, and to help us do the work better.'

'Race matters. As our racial landscape dramatically changes, we must pay more attention to the racial inequities that continue to plague many communities of color. In The Hidden Rules of Race, we get a roadmap to why and how we must rewrite the racial rules in order to pave the way for racial and economic justice.'

'For too long, efforts to combat racial inequalities have been pitted against efforts to combat economic inequalities, in ways that have only empowered those who benefit from both. The authors of The Hidden Rules of Race show how in virtually all spheres of American life, the nation operates with explicit and tacit rules that perpetuate both race and class inequities. They advance proposals that should be central to national debates on how to pursue more truly equal rights and opportunities for all.'

'This book draws on a variety of data sources and methods to demonstrate how the racial rules affecting wealth, income, education, criminal justice, health, and democratic participation continue to produce suboptimal outcomes in the largest economy in the world. It identifies not only rules that exclude large numbers of people from participating fully in the economy and in society, it also provides examples of rules that have minimized inequality and that produce greater equity. To say that The Hidden Rules of Race gives timely clarity to one of the most pressing and fundamental issues in our society today would be a vast understatement. This is essential reading for economists, policymakers, corporate leaders, and all participants in our modern economy and society who would like to see [black Americans] achieve their maximum potential.'