Home
The Road to Inequality

The Road to Inequality

How the Federal Highway Program Polarized America and Undermined Cities 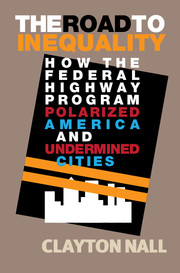 The Road to Inequality shows how policies that shape geographic space change our politics, focusing on the effects of the largest public works project in American history: the federal highway system. For decades, federally subsidized highways have selectively facilitated migration into fast-growing suburbs, producing an increasingly non-urban Republican electorate. This book examines the highway programs' policy origins at the national level and traces how these intersected with local politics and interests to facilitate complex, mutually-reinforcing processes that have shaped America's growing urban-suburban divide and, with it, the politics of metropolitan public investment. As Americans have become more polarized on urban-suburban lines, attitudes towards transportation policy - a once quintessentially 'local' and non-partisan policy area - are now themselves driven by partisanship, endangering investments in metropolitan programs that provide access to opportunity for millions of Americans.

'Clayton Nall has written an incredibly important book providing powerful evidence of the role that the federal highway program has played in the spatial distribution of the population, in dividing political interests, and ultimately in producing inequality. Using a tremendous amount of data and varied methodological approaches, and reaching back to the early decades of the twentieth century, Nall reveals that the federal government’s trillion dollar investment in highways has helped to drive a deep wedge between largely urban Democrats and largely suburban Republicans.'

'The Road to Inequality is a fascinating study showing how federal infrastructure investments not only created a divided metropolis but also fostered new political loyalties. Nall offers a deeply researched analysis of how red and blue America took on a spatial form with enduring consequences for the politics of inequality.'

'Clayton Nall has rewritten the legacy of America's interstate highway system and with it, the historical geography of the post-war Republican Party. With a stunning mixture of methods, each of them appropriate to its question and carefully deployed, Nall probes how our highway network has fashioned unequal chances along dimensions of place, race and politics. A master stroke of modern political science.'

'The author conducts insightful analyses of road atlases, historical housing ads, and a longitudinal panel survey to revisit well-studied concerns such as white flight and partisan realignment. The chapter on the partisan dimensions of transportation policy stands out for its analysis of original, recent surveys on transportation preferences. Strong bipartisan support remains for highway spending, but support for mass transit and other transportation priorities has become starkly partisan. Another strength is the author’s ability to clearly present a large number of detailed spatial and quantitative analyses. … Overall, the author succeeds in increasing foundational knowledge about transportation policy and demonstrating the value of political geography analysis.'

'… is a useful addition to the historical literature on the Interstates … Nall’s book is worthwhile reading, both for its insights concerning connections between Interstate highways to politics in [the] United States.'