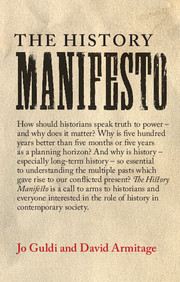 How should historians speak truth to power – and why does it matter? Why is five hundred years better than five months or five years as a planning horizon? And why is history – especially long-term history – so essential to understanding the multiple pasts which gave rise to our conflicted present? The History Manifesto is a call to arms to historians and everyone interested in the role of history in contemporary society. Leading historians Jo Guldi and David Armitage identify a recent shift back to longer-term narratives, following many decades of increasing specialisation, which they argue is vital for the future of historical scholarship and how it is communicated. This provocative and thoughtful book makes an important intervention in the debate about the role of history and the humanities in a digital age. It will provoke discussion among policymakers, activists and entrepreneurs as well as ordinary listeners, viewers, readers, students and teachers. This title is also available as Open Access.

‘This is a very important and refreshing book. For too long, we have seen increasing specialization within historical research and between the disciplines of social sciences. Armitage and Guldi rightly plead for a return of the ‘longue durée’. They call for more global, long-run and transdisciplinary approaches to big questions, including climate change, inequality and the future of capitalism. Their book will be an important milestone in this direction. A must-read.’

‘This well-written, smart, deeply and broadly learned book is a bracing challenge to contemporary historiography. Critical of the loss of a sense of la longue durée and series, replaced by histories of the 'short term' and micro-scale since the 1970s, the authors argue that history has lost much of its public significance and usefulness. David Armitage and Jo Guldi have produced a rich history of the discipline as the foundation of a compelling plea for bringing forth more bigger and better histories into our civic life.’

‘Guldi and Armitage make a compelling argument for the relevance of history, and for its potential as an antidote to the twin afflictions of short-term thinking and future prognostication based on poor or partial evidence. In a concise and clear book, they make renewed claims for the capacity of the past and its data, properly studied, to inform public policy and democratic debate on a wide range of issues from economic malfunction to climate change. They also throw out a challenge to academic historians to pull on, and perhaps break, some disciplinary shackles that have mentally fettered the profession for the better part of a century.’

‘How can we think seriously about our grandchildren’s future if no one thinks on scales longer than a few years? Jo Guldi and David Armitage tell a rich and swashbuckling story of how historians are returning to big picture thinking, armed now with the rich insights of microhistory and the vast archives of big data. In the Age of the Anthropocene, they argue, it is vital that we know the past, and that we know it at very large scales.’

‘History will always remain a craft with many workshops perfecting different traditions, but here is a fast-paced manifesto which urges the profession to focus on long-term questions and embrace ethical obligations to provide urgently needed perspectives on key dilemmas of our times. Its view of recent Anglo-American historiography as ‘short-termist’ and passionate plea that history can map out alternative possibilities for better societies will invite controversy and instantly invigorate classroom debates with a double shot.’

Ulinka Rublack - University of Cambridge, and editor of A Concise Companion to History

‘An important attempt to make history relevant to a broad public, away from the narrow specialization which has dominated the historical profession to a long range nexus of past, present and future which places the present global crises of ecology and inequality in their historical context and takes into account the impact of digitalization on historical studies.’

‘An exhilarating anticipation of a digitised and globalised future, in which historians will assume the role of critical problem-solver. Guldi and Armitage argue that to do so, historians must recover their command of the longue durée and boldly apply their grasp of multi-causality to the dominant practical disciplines of the day.’

‘In their timely and useful book, Armitage and Guldi have issued a call to arms. They urge historians to use their knowledge and skills to think big, to embrace long term thinking and the possibilities of digital technology. Above all they hope that an increasingly fragmented discipline can embrace its public role and take on, in an ethical, utopian spirit, some of the biggest issues of our time, such as inequality and climate change. They make a heartfelt plea for those who specialise in the past to make a major contribution to thinking about the future. Their manifesto for history as a critical social science deserves careful consideration both by those already persuaded of its public purpose and by those yet to embrace this generous view of the field.’

‘Of all the many ways in which public policies and public debates today lack necessary perspective, perhaps the most important is their lack of historical perspective. In The History Manifesto David Armitage and Jo Guldi offer a ringing call not just for more knowledge of the past, but for the centrality of a broad and deep understanding of history to public knowledge itself.’

‘Big problems meet big data in this compelling case for long-term thinking in the public sphere. Guldi and Armitage don't just chart a new course for the discipline of history, but for the uses of history across disciplines. I'm convinced: a return to the longue durée is theoretically sound, technologically feasible, politically imperative.’

‘Ideas about big and deep histories have been recently flagged as ways historians could make their work speak to present concerns about human futures. This wide-ranging and spirited book not only provides the best discussion so far of these questions; by staking the very future of history on historians’ capacity to shape public debates, Guldi and Armitage issue to fellow historians nothing short of a stirring call to action. A welcome and timely intervention.’

'For a very brief but enormously timely essay on why we need better ways of thinking about our past The History Manifesto is excellent. It demonstrates why we need history - in universities but also in public discourse - and wonders provocatively why governments second economists and the like to their service but never historians, who have a distinct responsibility to underline complexity of social causation, the need for long views and the dangers of narrating the past from inside one or another kind of silo.'

'This volume (deliberately named a 'manifesto') urges historians to reject short-time thinking as the overall temporal context of their works because it makes them unable to understand and appreciate modern long-time developments such as the despoilment of the earth and oceans, inequalities in international relations, and the impact of climatic changes. No less than a radical change away from short-time to long-time thinking will do. Universities and religions still have maintained long-time perspectives, but have done so under great negative pressures. During recent decades, historians' contributions have often disappointed expectations by remaining in the short term as they favored primarily academic (archival) narratives. Yet new scientific and digital technologies, with their ability to reach far back in time, clearly favored the long term, and the debate on time spans for history took on a new vitality. This informative section of the book, especially helpful with its extensive notes and bibliography, offers a fine introduction to contemporary debates relating to history and time. Summing up: recommended.'

'The book is an eminently readable and thought-provoking account of the broader repercussions of the various historical turns of the twentieth and early twenty-first centuries, a helpful survey of recent work utilizing new methodologies for incorporating Big Data into historical research, and a healthy warning to students and scholars of history on the importance of relating their work to the big picture and broader public.'