Home
The Long Process of Development

The Long Process of Development

Building Markets and States in Pre-industrial England, Spain and their Colonies 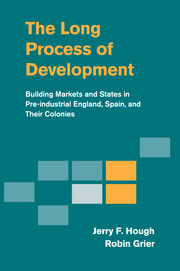 Douglass North once emphasized that development takes centuries, but he did not have a theory of how and why change occurs. This groundbreaking book advances such a theory by examining in detail why England and Spain developed so slowly from 1000 to 1800. A colonial legacy must go back centuries before settlement, and this book points to key events in England and Spain in the 1260s to explain why Mexico lagged behind the United States economically in the twentieth century. Based on the integration of North's institutional approach with Mancur Olson's collective action theory, Max Weber's theory of value change, and North's focus on dominant coalitions based on rent and military in In the Shadow of Violence, this theory of change leads to exciting new historical interpretations, including the crucial role of the merchant-navy alliance in England and the key role of George Washington's control of the military in 1787.

'To better to understand today’s developing world, Hough and Grier turn to history. Argument after argument, point after point, they demonstrate the benefits of doing so. This study adds to the legacy of North, Olson, Acemoglu and Robinson, all of whom have turned to the study of political history in an effort to comprehend the economics of development.'

'How exactly does colonial history shape the subsequent economic development of a nation? The Long Process of Development is the best and deepest treatment of this question that has been penned.'

'Economists and policy makers have ignored the time it takes to foster substantial change in informal institutions that are a sine qua non for economic development and political stability. Synthesizing the classic works of Douglass North, Mancur Olson and Max Weber, Grier and Hough add a temporal factor that illuminates the slow pace to the modern world.'

'To my knowledge, this book is the first, and surely the first serious, attempt to confront the transactions costs-based approaches of Olson and North with the evolved-order approaches of Hayek and Buchanan. The result is a book of signal merit, explaining both the politics of economic development and the economics of political development.'

'A development narrative that has both the historical long-view and the granularity of the particular. Their insights will be valuable to all students of development - and a healthy antidote to the fad panaceas of the day.'

'It may sound obvious and trite, yet it is the most underappreciated fact of comparative development: constructing effective states takes time - a very long time. As Jerry Hough and Robin Grier show, the process took more than four centuries in England and Spain. Their analytical history sheds light on why the norms and practices that sustain modern states require long periods of gestation to become solidly entrenched. This is a book with critical implications for today’s state-building efforts in the developing world. It warns us not to expect miracles and teaches us that chance, contingency and time all play a larger role than we typically allow.'