Americans and Human Rights in the Twentieth Century 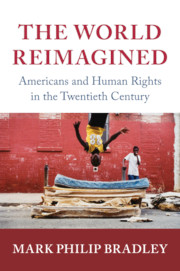 Concerns about rights in the United States have a long history, but the articulation of global human rights in the twentieth century was something altogether different. Global human rights offered individuals unprecedented guarantees beyond the nation for the protection of political, economic, social and cultural freedoms. The World Reimagined explores how these revolutionary developments first became believable to Americans in the 1940s and the 1970s through everyday vernaculars as they emerged in political and legal thought, photography, film, novels, memoirs and soundscapes. Together, they offered fundamentally novel ways for Americans to understand what it means to feel free, culminating in today's ubiquitous moral language of human rights. Set against a sweeping transnational canvas, the book presents a new history of how Americans thought and acted in the twentieth-century world.

‘This is a magnificent and much-needed book on how the United States has wrestled with the global human rights imagination in the twentieth century. Bradley’s history provides an essential discussion of the background for some of the critical issues in today’s international human rights regime.’

‘Operating at the intersection of diplomatic history and cultural analysis, this elegant study rewrites the history of how human rights language came to be a powerful yet ordinary vernacular for Americans. Bradley's approach is remarkably interdisciplinary, and his use of visual culture to analyze the affective call of human rights logic is utterly compelling. This book will transform how we think about the history of human rights and the limits of the US role in that history. [The World Reimagined] is a brilliant, field-defining work.’

‘Mark Philip Bradley has written a luminous account of the human rights movement in America that draws on an astonishing array of material including photography and popular culture. [The World Reimagined] traces both the evolution and the limitations of human rights as the ‘ubiquitous moral language’ of the day. Beautifully written and powerfully argued, no other work on the subject comes close to this brilliant analysis.’

‘Mark Philip Bradley expands the boundaries of both American and human rights history in this luminous book, which provides extraordinarily compelling and fundamentally novel depictions of two different eras and how they relate across decades. With his trademark depth of mind and enviable subtlety, Bradley has achieved the most finely wrought and intellectually consequential history of America's place in the imagination of human rights ever composed. By turns absorbing and moving, it simultaneously brings the topic to a new level of sophistication and to the broadest of audiences.’

'… an artful book in all positive meaning of this word. The source material encompasses photography, theater, literature, and painting. … Mark Philip Bradley has done a remarkable job of addressing the imperfections of memory and the inadequacies of documentation as they relate to an important part of human rights history, justifying a readership well beyond academia. He has also succeeded in a subtle repositioning of that physical and imaginative place called America and its role in the global human rights story.'

'In the 1940s and again in the 1970s, Bradley convincingly argues, American diplomats (and numerous citizens and NGOs) began to talk about foreign engagements in a new way … Bradley describes and explains how ‘human rights talk’ entered American political and diplomatic culture, and the direction it’s headed.'

'A brilliantly interdisciplinary study of the role of non-state actors engaged in human rights advocacy in the 1940s and the 1970s.'

'The UN’s 1948 adoption of the Universal Declaration of Human Rights was the starting point for what would become a revolution in global political culture. In this landmark book, Bradley illuminates this transformation, focusing less on the drama of great-power politics than on subtle shifts in how elites and activists outside of government visualized and verbalized the rights and obligations of people within an emerging postwar community of nations, tracking how talk of human rights went from an 'exotic aspirational language' to an 'everyday vernacular'.'

'Excellently written. … elegantly operates at the intersection of diplomatic and cultural history, offering a very inspiring analysis of the issue of global human rights. A beautifully written, magnificent history of human rights in America that offers an intriguing new perspective on the entangled role of the United States with the world and the global human rights discourse. By focusing on the significant interplay between the global and the local in the creation of American human rights vernaculars, the book hugely enriches today’s understanding of universal human rights. The World Reimagined is transnational history at its best.'

'How to explain the persistence of human rights talk and activism despite their disheartening failure? Mark Bradley’s The World Reimagined is an ambitious, wide-ranging, and thought-provoking exploration of this question.'

'Mark Bradley has written a field-changing study of the role of affect in shaping the public understanding of human rights in the United States … This remarkable book is exciting for those of us who work in human rights, US in the World, or adjacent fields, but it is also eminently teachable, offering to our graduate and undergraduate students a model of how rigorous, worldly, and creatively conceived scholarship can help us hone our own moral imaginations.'

'Mark Philip Bradley has done us a tremendous service by rendering such a broad and disparate set of sources into a coherent, convincing, readable narrative. The World Reimagined is a stellar achievement and a marvelous contribution to our understanding of modern human rights claims, the human rights imagination, and America’s role in the world. No doubt it will stand as a vital work in the field for many years to come.'

'This work is informative and adds new perspectives on American human rights history. … Bradley’s work provides a judicious and insightful summary of America’s role - both its promise and its limitations - in promoting human rights in the three decades since the Second World War.'

Matthew Hill Source: Journal of the Conference on Faith and History