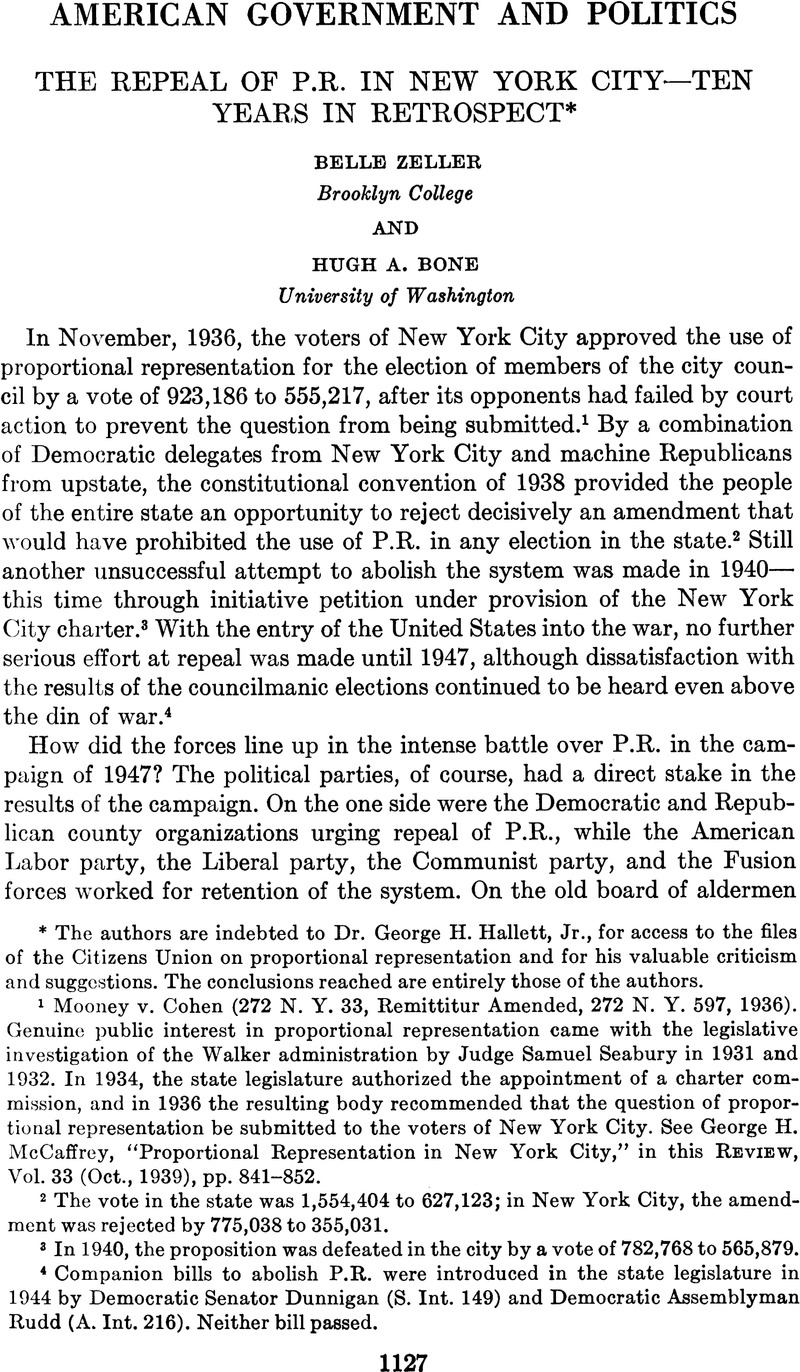 1 Mooney v. Cohen (272 N. Y. 33, Remittitur Amended, 272 N. Y. 597, 1936). Genuine public interest in proportional representation came with the legislative investigation of the Walker administration by Judge Samuel Seabury in 1931 and 1932. In 1934, the state legislature authorized the appointment of a charter commission, and in 1936 the resulting body recommended that the question of proportional representation be submitted to the voters of New York City. See McCaffrey, George H., “Proportional Representation in New York City,” in this Review, Vol. 33 (Oct., 1939), pp. 841–852.

4 Companion bills to abolish P.R. were introduced in the state legislature in 1944 by Democratic Senator Dunnigan (S. Int. 149) and Democratic Assemblyman Rudd (A. Int. 216). Neither bill passed.

7 New York Times, Oct. 7 and 18, 1947. The Governor maintained silence on this “local matter” except to announce during the last week of the campaign that he would vote “yes” on all questions before the voters that year.

8 New York Herald Tribune, Oct. 28, 1947. It should be said, however, that in 1946, without P.R., there were a number of four-cornered races, especially for the state senate and assembly, from Bronx county, in which each of the four candidates received a substantial number of votes. See especially the returns from the 24th, 26th, and 28th senatorial districts and from the 2nd, 3rd and 8th assembly districts, in which candidates with less than half the votes secured all the representation at the expense of a divided majority. There would have been an even larger number of such races throughout the city but for the endorsement of some Democratic and Republican candidates by the Liberal party or the American Labor party.

12 Of Mr. O'Dwyer's colleagues on the Board of Estimate, Comptroller Lazarus Joseph remained silent throughout the campaign, while Vincent R. Impellitteri, president of the city council, and Hugo E. Rogers, president of the Borough of Manhattan, spoke out for repeal during the last week of the campaign. Messrs. Joseph, Impellitteri, and Rogers had been endorsed for election in 1945 by both the Democratic and American Labor parties.

13 According to the sworn statement of its assistant treasurer, filed with the secretary of state on Nov. 24, 1947, the Citizens Committee to Repeal P. R. was financed wholly by the five Democratic county committees in New York City.

17 Among other important New York City newspapers which changed their editorial position on the question between 1936 and 1947 were the Daily News, which supported P. R. in 1936; the Post, which urged repeal in 1945; and the World Telegram, a Scripps-Howard paper which supported P. R. for New York before 1947. The Scripps-Howard paper in Cincinnati, the Post, continues to support P. R. for that city. Special mention should be made of the Herald Tribune's consistent and vigorous support of P. R. on an intelligently high plane throughout the ten-year experiment, culminating in 1947 in large coverage of news, special features, editorials, and letters to the editor. “The Clubhouse Vote Sees Victory,” by Murray Snyder, in the Herald Tribune (Oct. 21, 1947), and Landman's, Amos article with illustrations entitled “New Yorkers Face Vote on P. R.,” in P. M. (June 19, 1947) should be noted as first-rate.

18 Cf. Citizens Committee for the Repeal of P. R., P. R. Exposed (1947), p. 6. The election of Communists to local offices in several Midwestern states between 1931 and 1934 can be cited. During the campaign, Herbert Pell, former congressman and minister to Portugal and Hungary, advanced the argument in his plea for continuance of P. R. that the fact that Communists under P. R. can elect some of their own candidates should keep them from boring within the major parties, as did Wayne Wheeler, leader of the Anti-Saloon League, with such great success. Cf. “P. R. and the Communists” (mimeo, 1947).

19 See Mr. Curran's statement above, p. 1128. The advocates of repeal leaned heavily upon the writings and support of ProfessorHermens, Ferdinand A., long a critic of P. R. See his Democracy or Anarchy; A Study of Proportional Representation (Notre Dame, University of Notre Dame, 1941), and Democracy and Proportional Representation (Public Policy Pamphlet, No. 31, University of Chicago Press, 1940).

20 The debate on P. R. in foreign countries continued into 1948, when Richard S. Childs, chairman of the Citizens Union, pointed out that in the Italian parliamentary elections of April 19, 1948, a single party, the Christian Democrats, secured a majority of seats under P. R. Professor Hermens, in reply, noted that the Christian Democrats received 53 per cent of the seats with 48 per cent of the vote, and that Italian voters, because of fear of Communism, have given Italy only a temporary truce. New York Times, May 3 and 12, 1948.

25 See the Association's Report Concerning Election of the New York City Council by Proportional Representation (mimeo., 1947), pp. 18–19. Attention should be called to the nineteen-page mimeographed Examination and Refutation of this report by the Citizens Committee to Repeal P.R.

26 The American Veterans Committee opposed the bonus and the repeal of P. R. The Jewish War Veterans favored the bonus, but took no position on P. R.

29 Daily Worker, Oct. 27, 1947. In only two of the 16 assembly districts in Manhattan (New York county) did the vote to continue P. R. exceed the repeal vote; and one was Harlem's 11th Assembly District. The New York Joint Executive Council of the National Association for the Advancement of Colored People threw its support behind the campaign to retain P. R. as the “best method through which minority groups can be assured of satisfactory leadership and representation in the city council.” New York Times, Oct. 19, 1947.

30 New York Herald Tribune, Oct. 20, 1947. Rev. Robert W. Searle, executive secretary of the Human Relations Commission of the Protestant Council of New York, announced that the commission was in favor of P. R.

31 New York Times, Oct. 23, 1947. The above statement was not entirely true; the system was used in electing members of the upper house of the Danish parliament.

38 There is one councilman from the fifth borough, Richmond, who is elected by a method that amounts to majority preferential voting.

43 Only 2,000 signatures are required for nomination.

47 For example, “P.R.—Is it Good Or Bad?,” between O. Reichler, editor of the Yonkers Herald Statesman, and F. A. Hermens over CBS on Oct. 23, 1947. Yonkers, an important industrial city adjoining New York, used P.R. for council elections after 1939; but at the election of November 2, 1948, the voters repealed the city charter's provision on the subject.

50 New York Times, Oct. 27, 1947. For the conduct of the first election, the city spent $701,623. This huge sum was due, undoubtedly, to unfamiliarity of the election authorities with the new system and the dilatory tactics employed by temporary workers who were paid by the day. In subsequent elections, the cost to the city was about $250,000 each, making a total of $1,663,292 for the five elections, over and above the regular expenses of elections.

* The authors are indebted to Dr. George H. Hallett, Jr., for access to the files of the Citizens Union on proportional representation and for his valuable criticism and suggestions. The conclusions reached are entirely those of the authors.