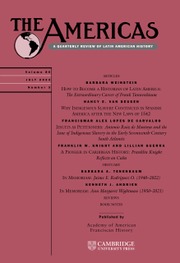 Olga Herrera meticulously chronicles how modern art became “a strategic instrument of national security” (1) through the establishment of the Art Section of the Office of the Coordinator of Inter-American Affairs (CI-AA; later known as the Office for Inter-American Affairs) in 1941. Comprising six chapters, each corresponding to different activities sponsored by the CI-AA, Herrera's book maps out the many interconnections and relationships motivating the circulation of modern art and design from the United States in Latin America and vice versa.

Herrera expertly charts the historical details that drove the United States to implement art initiatives as a strategy of national security and cultural defense. Determined to supplant Latin America's cultural dependence on Europe, the United States actively deployed modern art during the World War II era as a means to disseminate ideas of freedom and democracy, all the while asserting its dominance in the hemisphere. One example of such deployment was the CI-AA sponsored exhibition Contemporary North American Painting, which circulated throughout South America in 1941. Showcasing the work of 112 US artists, the exhibit relied on the infrastructure of the Museum of Modern Art (MoMA); it is clear that MoMA's institutional trajectory is closely imbricated with that of the CI-AA. One notable consequence of the traveling exhibit was the establishment of artistic circuits between North and South America where none had existed before, thereby paving the path for the global art networks that mark our contemporary moment.

Herrera's methodological approach, briefly touched on in the introduction, is informed by among other sources, Peter Dicken's concept of networks. She quotes Dicken as allowing us “to think in terms of connections of activities through flows of material and non-material phenomena, of the different ways that networks are connected, and the power relations through which networks are controlled and coordinated” (7). I am not convinced by the need for this framing device, and instead would have liked to see more on how this study relates to extant scholarship from the United States and Latin America about hemispheric cultural diplomacy during the Cold War.

In addition to documenting the activities of the understudied Art Section, Herrera sheds light on numerous figures that played pivotal roles in establishing the field of Latin American art in the United States. For example, Grace McCann Morley (1900–1985), then director of the San Francisco Museum of Art curated a selection of artworks from Central and South America for the museum, to coincide with the San Francisco Golden Gate International Exposition of 1939–40. Having traveled throughout the region, she “stressed the importance of considering each country's art within its proper national context” (167), advocating for more focused art historical research to better understand the modern art of South America. In this vein, she also traced the trajectory of Lincoln Kirstein (1907–97), a better known and more documented figure, who was charged by Nelson A. Rockefeller and MoMA to travel to South America to acquire modern art, with a budget of $12,500. Kirstein traveled to Brazil, Argentina, Uruguay, Chile, Peru, Ecuador, and Bogotá, compiling extensive reports on the artists that he visited; a complete list of his purchases is included in the book. Upon his return, he encouraged MoMA to establish a department of Latin American Art.

It is clear from the frequent glimpses into her archival findings via reproductions of correspondence, memos, photos, diagrams, advertisements, entry stubs, exhibition posters, and other memoria that Herrera conducted extensive and rigorous archival research in the United States. I found such ephemera extremely valuable in visually reconstructing the context of the period covered. However, there was no reference to research carried out in Latin American archives, which could have contributed a unique perspective to this history.

Herrera's expansive study elucidates how governmental, private, and public spheres converged through the initiatives spearheaded by the CI-AA, providing crucial knowledge of the postwar period for both the United States and Latin America. It is clear that this chapter in twentieth-century modern art deserves more attention and integration into existing narratives.