The Avdat in Late Antiquity Project: uncovering the Early Islamic phases of a Byzantine town in the Negev Highlands 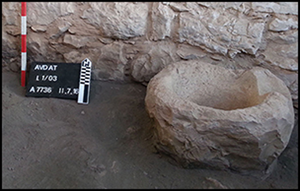 Three seasons of archaeological fieldwork by the Avdat in Late Antiquity Project have yielded new evidence of intensive Early Islamic activity in the late antique town of Avdat in Israel's Negev Highlands. This evidence has important implications for understanding the fate of such towns in the region during the Byzantine–Islamic transition.

Since 2012, the Avdat in Late Antiquity Project has conducted fieldwork at the UNESCO World Heritage Site of Avdat (also known as Oboda or Abde) in the Negev Highlands of southern Israel (Figure 1). The project was conceived to better understand the late antique phases of this hilltop town and its Byzantine monastic population. Results of the first three seasons, however, have broadened the project's scope considerably, based on new evidence for substantial human activity at the site during the Early Islamic period, c. AD 650–900. Moving beyond the traditional focus on the impressive monumental buildings that form Avdat's Roman–Byzantine acropolis (Negev Reference Negev1997), the project concentrates on the largely uninvestigated 2ha residential sector, which comprises hundreds of rock-hewn dwellings built in terraces along the northern, southern and western slopes immediately below this necropolis (Shereshevski Reference Shereshevski1991: 38–42; see Figure 2). Integrated interdisciplinary investigation of the excavated material is producing new information concerning the activity and identity of Avdat's residential population during the Byzantine–Islamic transition. Shedding light on the social, economic and settlement dynamics of post-urban Avdat, this ongoing research contributes to scholarly discourse on the Byzantine–Islamic transition in the Negev and Near East (e.g. Kennedy Reference Kennedy1985; Avni Reference Avni2011). It offers a new case study for interrogating urban change and continuity, resilience and decline, while giving visibility to ancient groups, such as Christian monks and pastoral nomads, which are usually absent from the narrative of Incense Route sites.

Figure 2. Aerial view of the southern slope at Avdat after the 2018 season, with inset showing final excavation of the southern compound after 2019 season (photograph by E. Alajem; inset by S. Bucking).

The project's main area of excavation concerns a stone-built, multi-roomed cave compound along the first terrace of Avdat's southern slope (Figure 2) (Bucking Reference Bucking2017; Bucking & Erickson-Gini Reference Bucking and Erickson-Gini2020). Over three field seasons, a series of stone-constructed rooms articulating with the cave were stratigraphically excavated (Figure 3) and steps were taken to conserve the compound so that it could be included in the UNESCO visitor trail. The compound was initially of interest due to concentrations of red-painted figures and symbols (‘dipinti’) in two rooms (Bucking Reference Bucking2017). These included decorated crosses and a probable depiction of the warrior saint Theodore, possibly indicating a phase of habitation by Christian monks who maintained a martyr cult of Theodore (Negev Reference Negev1997: 122–52). This raises larger questions about urban monastic settlement patterns in the late antique Negev, which have mostly gone unexamined (Goldfus Reference Goldfus2003).

The project's three seasons of fieldwork yielded copious well-preserved organic materials, including substantial layers of herbivore dung and seeds overlying a Byzantine-period floor in the stone-built rooms. These layers, together with watering and feeding troughs, are indicative of livestock stabling. Such livestock may have played a role in viticulture, given that pack animals were used in this industry (e.g. Fuks et al. Reference Fuks, Avni and Bar-Oz2021: fig. 5). This hypothesis is supported by finds of grape seeds and the location of agricultural fields just downslope from the compound. It also accords with evidence of a flourishing viticulture industry in the Byzantine Negev Highlands, apparently involving the participation of monastic communities (Mayerson Reference Mayerson1985).

To maximise information concerning agricultural regimes, diet, environment and chronology, the project implemented a robust sampling strategy for optimal retrieval of organic remains, directed by the project's archaeobotanist (D.F.). Three organically rich areas of the compound were targeted: (i) the south-western section of the built compound (Figure 4), and (ii) the northern and (iii) western sections near the cave entrance (Figure 5). Section samples were also taken for geoarchaeological analysis.

Priority was given to radiocarbon analysis to establish a site chronology, especially considering the sparsity of ceramics. Radiocarbon results were surprising: while a sample of straw extracted from mortar in the dipinti-intensive cave vestibule wall yielded dates within the expected Byzantine range, nine samples from the organic, dung-enriched south-western section were of Umayyad–Abbasid date, ranging from 1190–1320±30 BP/AD 650–890 (Figure 4) (Bucking & Erickson-Gini Reference Bucking and Erickson-Gini2020). Three newly obtained dates from the northern and western sections yielded Abbasid dates (Figure 5): two from a substantial organic layer in the northern section, and one in the western section, where Abbasid Mefjer/Buff Ware (Cytryn-Silverman Reference Cytryn-Silverman and Gutfeld2010) further corroborated this result (Figure 6). The emerging extended chronology enriches ongoing debate surrounding the fate of Negev Highland settlement in the Early Islamic period, especially that regarding continuities and discontinuities of site use between the Byzantine, Umayyad and Abbasid periods (e.g. Magness Reference Magness2003; Avni Reference Avni2008; Butler et al. Reference Butler2020).

These results raise new questions and research directions to be pursued by the Avdat in Late Antiquity Project. How widespread was Umayyad–Abbasid period activity at Avdat and to what extent does it represent a continuation of Byzantine agricultural settlement versus a possible transition to pastoral nomadism? Throughout the literature are tantalisingly short references to previous finds of Islamic material culture elsewhere in Avdat (Shamir & Baginski Reference Shamir and Baginski2001), further justifying a planned systematic survey and additional excavation of the sector to gauge the extent of Islamic-period activity. Ongoing archaeobotanical and archaeozoological analyses will refine our understanding of local economic activity over time, particularly with regard to viticulture (Fuks et al. Reference Fuks2020, Reference Fuks, Avni and Bar-Oz2021). Geoarchaeological analyses for stratigraphic characterisation of sediments and chronological fine-tuning via additional radiocarbon dating (Butler et al. Reference Butler2020)—including of post-Abbasid strata—are expected to provide high-resolution documentation of Avdat's urban and post-urban phases. These combined analyses will help to identify the various groups active at the site during and after the Byzantine–Early Islamic transition.

The project operates in full partnership with the Israel Antiquities Authority and the Israel Nature and Parks Authority. We are grateful to both organisations for facilitating work at the site and for providing a wide range of professional services and support.

The project is grateful for the support provided by the DePaul University Research Council, the College of Liberal Arts and Social Sciences, Office of the Provost, the Department of History, and the American Philosophical Society, in addition to a British Academy Newton International Fellowship awarded to D.F.

Figure 2. Aerial view of the southern slope at Avdat after the 2018 season, with inset showing final excavation of the southern compound after 2019 season (photograph by E. Alajem; inset by S. Bucking).

The Avdat in Late Antiquity Project: uncovering the Early Islamic phases of a Byzantine town in the Negev Highlands
×

The Avdat in Late Antiquity Project: uncovering the Early Islamic phases of a Byzantine town in the Negev Highlands
×

The Avdat in Late Antiquity Project: uncovering the Early Islamic phases of a Byzantine town in the Negev Highlands
×
×