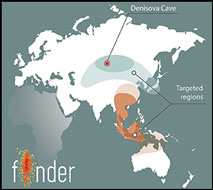 The FINDER project aims to apply ZooMS to identify new hominin fossils from across large parts of Eurasia previously lacking in such evidence. 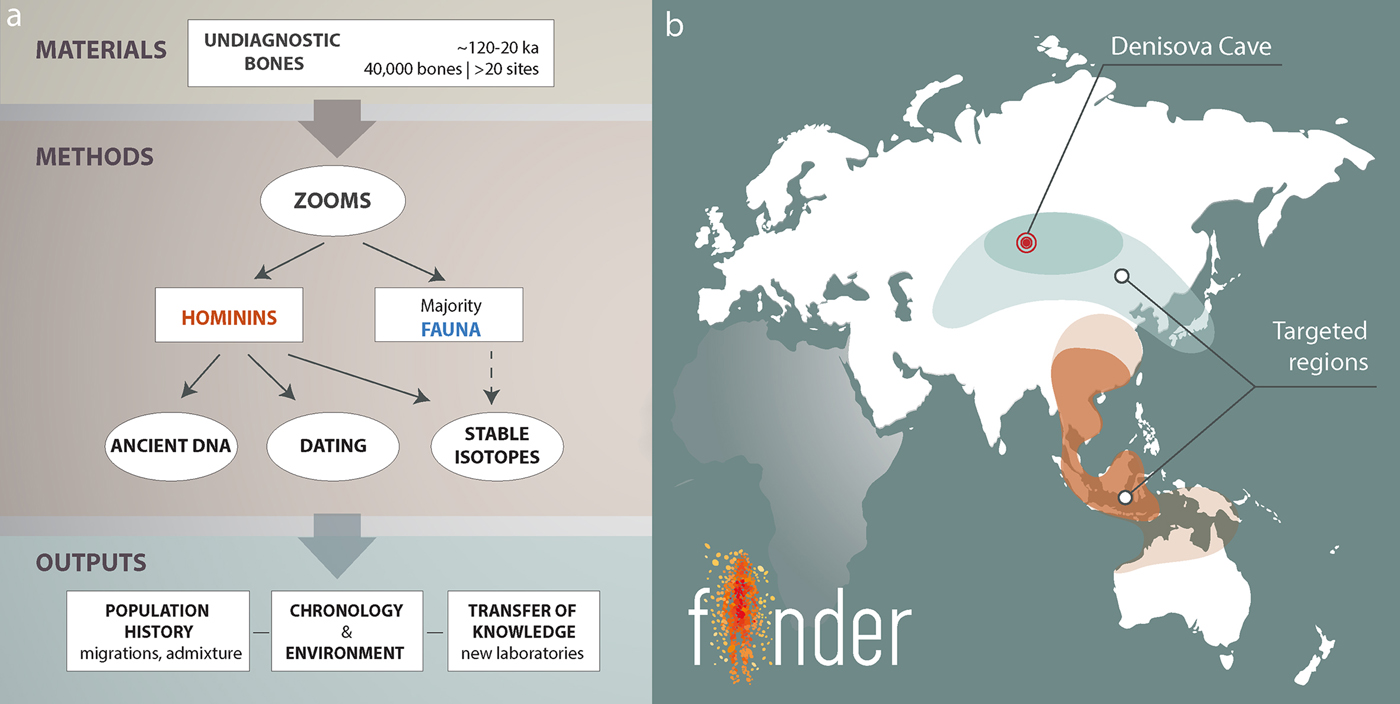 The Eurasian supercontinent is critical in understanding human evolution. Human fossils discovered in the past two decades (including those from Denisova Cave and Ust’-Ishim, Russia; Liang Bua and Lida Ajer, Indonesia; Tianyuan and Fuyan Caves, China; and Pestera çu Oase, Romania) have revealed much greater complexity in species spatio-temporal distribution and connections than previously envisaged. New discoveries of modern human remains suggest a substantially earlier presence in places previously lacking such evidence, while the geographic range of Neanderthals, traditionally considered a Europe-bound population, is now expanded significantly into Siberia and possibly northern China. We also know that Denisovans, an archaic sister group to Neanderthals, may have been distributed from Siberia to Melanesia over the past 200 000 years (for a recent review, see Bae et al. 2017). To date, however, only five Denisovan remains have been discovered, all from the eponymous site (Douka et al. 2019).

The significance of these findings encouraged us to address the noticeable lack of human remains from huge stretches of Eurasia. Understanding Pleistocene human presence and interaction “heavily depends on finding more Denisovan and other archaic human species remains” (Wolf & Akey 2018). Clearly, it is crucial that we develop means by which we can identify significantly more human bones from the archaeological record.

Most Palaeolithic sites contain large numbers of bones that, due to post-depositional influences and human and carnivore processing, are either too small or lack the diagnostic features required for taxonomic identification. Our hypothesis is that these morphologically unidentified bulk assemblages probably contain parts of human skeletons too small to be identified as such. The use of ZooMS enables fast and cheap screening of hundreds of bones per week. Approximately 20mg of a sample undergoes a chemical pretreatment that results in the extraction and purification of collagen peptides (Figure 2), followed by spectrometric analyses using matrix-assisted laser desorption/ionisation time-of-flight mass spectrometry (MALDI-ToF-MS). Comparison of the spectra generated (Figure 3) against reference libraries of known taxa allows us to identify the unknown bones and separate faunal from hominin remains (Brown et al. 2016; Welker 2018). Identifying human bones beyond the family level (Hominidae) is not possible using ZooMS; bone fragments with the characteristic peptide fingerprints therefore undergo DNA analysis for further genomic diagnosis. Direct radiocarbon and laser ablation U-series dating enables us to place the remains in their proper time period. 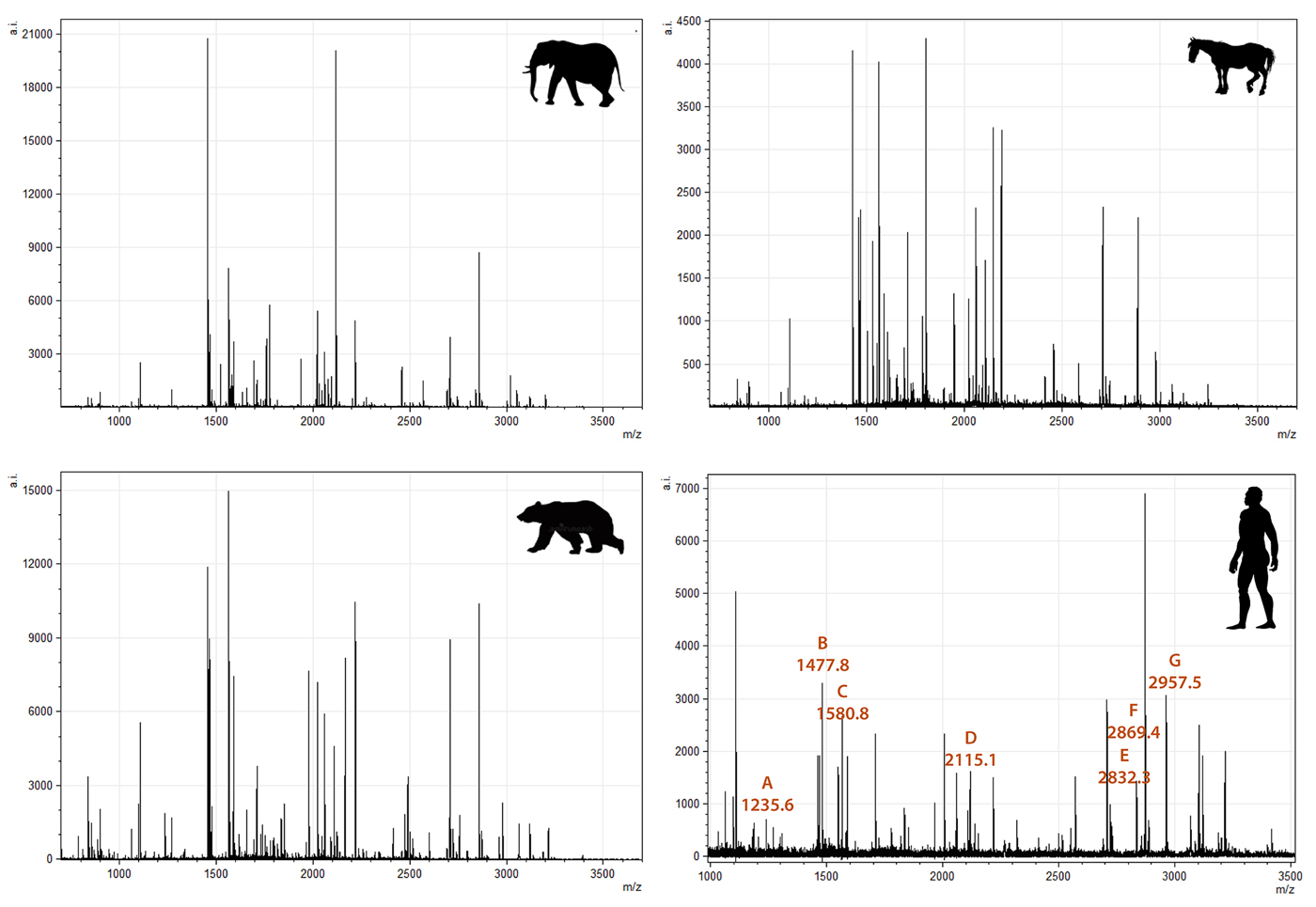 We target two major geographic clusters stretching from Siberia to Papua New Guinea (Figure 1b), and expect to analyse around 40 000 bones. Since FINDER's launch in June 2017, we have collected, processed and analysed more than 5000 bones from the northernmost cluster of Palaeolithic sites, including Denisova and Strashnaya Caves in the Altai region of Siberia.

The discovery and scientific analysis of new human fossils will strengthen our ability to test interpretative models concerning the routes and timing of modern human movements across Eurasia, the frequency of interaction between indigenous and migratory populations, and, ultimately, the mechanisms leading to the demise and/or absorption of all archaic lineages and the sole global dominance of our species.

In addition to offering doctoral scholarships and ongoing volunteering opportunities, one of the main objectives of FINDER is training scientists and establishing new ZooMS preparation laboratories in the participating countries, where material can be processed locally. This will eventually enable archaeology departments and museums to design their own projects around the application of ZooMS, to expand the research questions to periods and materials not examined by FINDER, and to facilitate international collaboration in addressing pressing societal issues, ranging from anti-poaching efforts to effective communication of science in secondary education.