Bulletin of the School of Oriental and African Studies 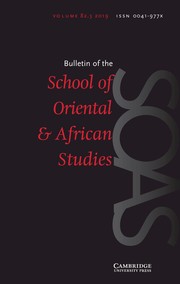 Reviews: The ancient Near East

Reviews: The Near and Middle East