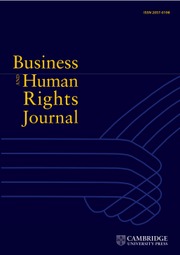 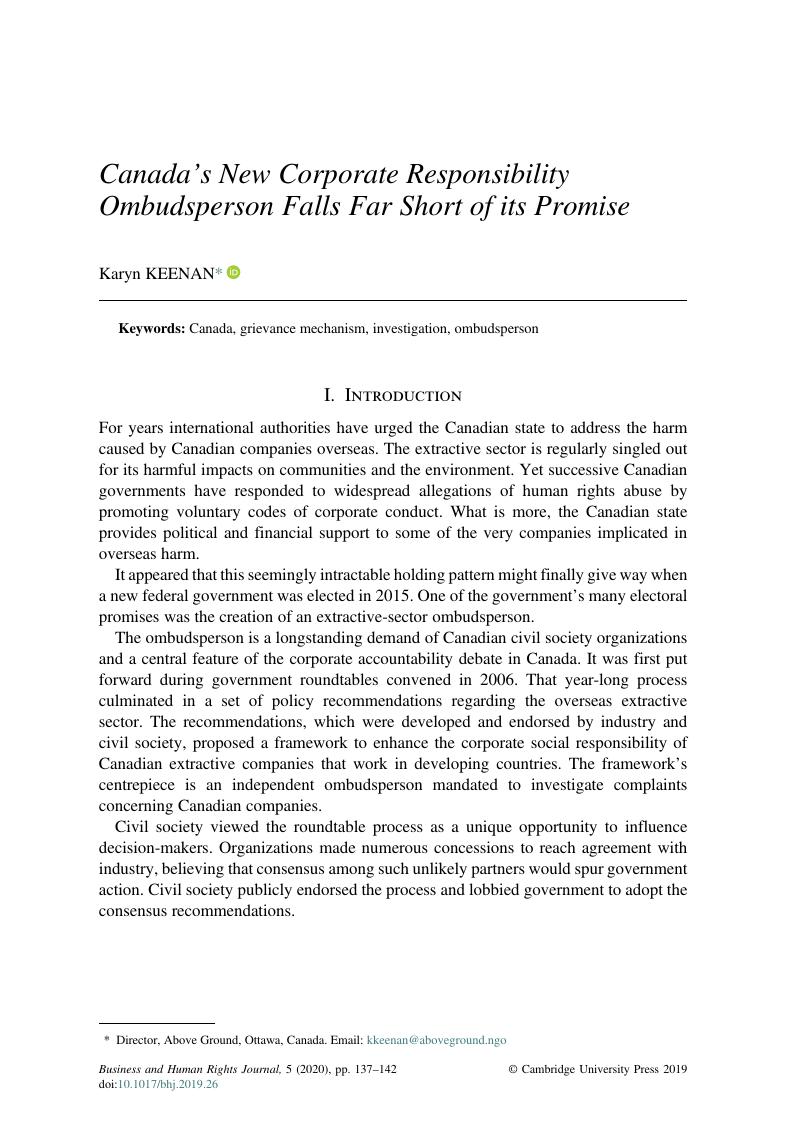 2 The CNCA brings together over 35 civil society organizations including human rights groups, faith-based organizations and labour unions, among others.

4 Such as the federal privacy and information commissioners in Canada, the Office of the British Columbia Ombudsperson and the Compliance Advisor Ombudsperson of the World Bank Group.

6 The CNCA model legislation also includes provisions concerning: which complaints will be investigated; which corporate entities are subject to the office’s jurisdiction; how investigations relate to other proceedings; confidentiality; conflict of interest; mechanisms to protect and consider the needs of victims (such as the victims of sexual violence); and mediation, among others.

7 The CNCA recommended that the ombudsperson be designated as an officer of parliament. Parliamentary officers operate at arm’s length from government and report directly to parliament. The network also proposed that the office be designated as a department under the Financial Administration Act, legislation that governs public financial management. The department designation would give the ombudsperson control over hiring and financial decisions.

8 For example: documents may contain information protected under privacy legislation; officers may be concerned that disclosures interfere with their fiduciary duties, etc.

9 Analogous offices exercise these powers at both the federal and provincial levels in Canada.

11 Human Rights Council, ‘Report of the Working Group on the Issue of Human Rights and Transnational Corporations and Other Business Enterprises on its Mission to Canada’, A/HRC/38/48/Add.1 (23 April 2018).

13 The Inquiries Act governs public commissions and inquiries. It grants the commissioners who conduct these investigations the power to summon witnesses and compel document production. The statute has been used in circumstances analogous to those concerning the ombudsperson.

14 The memo raises questions about the federal government’s constitutional power to issue such power; requirements under the Canadian Charter of Rights and Freedoms; conflict of laws issues regarding the compelling of information outside Canada; among others.

15 The Office of the Compliance Advisor Ombudsman of the World Bank Group sometimes uses joint fact-finding in its dispute resolution work and defines it thus: ‘[j]oint fact-finding is an approach that encourages the parties to jointly agree on the issues to be examined; the methods, resources, and people that will be used to conduct the examination; and the way that information generated from the process will be used by the parties’.

16 Specifically, legal suits that challenge orders made by the ombudsperson to compel document production and/or summon witnesses under the Canadian Charter of Rights and Freedoms.

17 The ombudsperson and her staff were designated as civil servants at the Department of Foreign Affairs, Trade and Development. The ombudsperson was instructed to report to the minister. In addition, the government declined to designate the office as a department through a second order-in-council under the Federal Administration Act.

20 Other concerns about the new order-in-council include: a lack of clarity regarding which companies will be subject to investigation; the ombudsperson’s discretion to refuse a complaint that is under review or has been reviewed elsewhere; the lack of a mandate to advise the government on systemic questions including the policy and legal framework governing Canadian corporations; among others.

21 Letter from the Honourable Jim Carr, Minister of International Trade Diversification, to Emily Dwyer, Coordinator of the CNCA (10 September 2019).

22 The CNCA provided the minister’s office with information about an important precedent for this approach involving the Indian Specific Claims Commission.