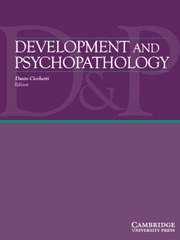 The legacy of Nicki R. Crick's contributions to developmental psychopathology

This Special Issue of Development and Psychopathology is devoted to the legacy of Nicki R. Crick. At the time of her passing on October 28, 2012, Nicki was a Distinguished McKnight Professor and Irving B. Harris Professor of Child Psychology at the Institute of Child Development, University of Minnesota. Crick served as the director of the Institute of Child Development from January 2005 to June 2011. To date, there have been few Special Issues or Special Sections in Development and Psychopathology devoted to the life's work of one individual. Known internationally for her creative and innovative research in the 20 years since she completed her PhD in clinical psychology from Vanderbilt University, Crick made many significant and long-lasting contributions to the fields of developmental psychology and developmental psychopathology. Nicki conducted groundbreaking research on the topics of aggression, peer victimization, positive youth development, social cognition, and personality pathology.

To date, over 30 of her publications have attained the status of citation classics. Several of her papers are among the most influential publications in the entire field of developmental science. Moreover, Crick's research fostered the development of interventions and policy initiatives to address aggressive conduct. In addition, Nicki translated her research on relational aggression into work on potential precursors to borderline personality disorder in children and adolescents.

In a highly influential set of studies, Crick radically altered the way that researchers, clinicians, teachers, and parents understand aggressive behavior. Crick challenged the field to consider aggressive behaviors that were not physical in nature. Building on theories of indirect aggression, in which the aggressor obscures his or her intention to cause harm (Björkqvist, Lagerspetz, & Kaukiainen, Reference Björkqvist, Lagerspetz and Kaukiainen1992), and social aggression, in which the aggressor targets the victim's peer acceptance and inclusion (Cairns, Cairns, Neckerman, Ferguson, & Gariépy, Reference Cairns, Cairns, Neckerman, Ferguson and Gariépy1989), Crick and Grotpeter (Reference Crick and Grotpeter1995) argued that aggressive strategies among youth are often focused on damage to interpersonal relationships. In this seminal publication, the authors coined the term relational aggression to capture behaviors that used relationship manipulation to hurt or harm others, such as malicious gossip, social exclusion, and threats of friendship withdrawal.

In the two decades following the publication of Crick and Grotpeter (Reference Crick and Grotpeter1995), a large body of research has emerged documenting the origins, course, and outcomes associated with relational aggression: the article has been cited over 3,000 times. The impact of this study reflects the authors' innovative perspective regarding aggressive girls. In contrast to the prevailing assumption in the field at the time that girls were not aggressive, Crick and Grotpeter (Reference Crick and Grotpeter1995) documented that girls engaged in relational forms of aggression with some frequency. Moreover, in several studies of peer victimization, Crick and colleagues found that girls were more likely to be targeted by relational, rather than physical, forms of aggression (e.g., Crick, Casas, & Ku, Reference Crick, Casas and Ku1999; Cullerton-Sen & Crick, Reference Cullerton-Sen and Crick2005). Although ensuing research has demonstrated that boys also frequently perpetrate relational aggression (Card, Stucky, Sawalani, & Little, Reference Card, Stucky, Sawalani and Little2008), the inclusion of relational aggression remains critical in studies aimed at understanding the aggressive behavior patterns of girls and women (see Ostrov & Godleski, Reference Ostrov and Godleski2010).

Crick's work in relational aggression and peer victimization piqued her interest in borderline personality disorder (BPD). Some of the symptom characteristics of adult patients with BPD bore similarities to Crick's research on relational aggression in children. Crick developed and validated the Borderline Personality Features Scale for Children (BPFS-C) child self-report measure to ascertain whether borderline personality features were present in childhood (Crick, Murray-Close, & Woods, Reference Crick, Murray-Close and Woods2005). The BPFS-C has been used to chart early developmental precursors and pathways to BPD. In addition, the development of the BPFS-C also led to several collaborative prospective studies of borderline personality features in childhood in maltreated children (Cicchetti et al., Reference Cicchetti, Rogosch, Hecht, Crick and Hetzel2014; Hecht, Cicchetti, Rogosch, & Crick, Reference Hecht, Cicchetti, Rogosch and Crick2014). Furthermore, Geiger and Crick (Reference Geiger, Crick, Ingram and Price2001) published one of the earliest papers on a developmental psychopathology approach to personality disorders that was influential in the development of two coedited Special Issues of Development and Psychopathology in 2009 devoted to precursors and diverse pathways to personality disorder in children and adolescents (Cicchetti & Crick, Reference Cicchetti and Crick2009a, Reference Cicchetti and Crick2009b).

In her latter years, Nicki devoted herself to investigating the effects that exposure to war, violence, and child maltreatment had on Acholi youth in Uganda. The Acholi youth of northern Uganda have experienced and been forced to participate in horrendous violence and maltreatment due to a 20-year war between a rebel group, the Lord's Resistance Army (LRA) and the Ugandan government. The trauma experienced by Acholi youth has been very extreme: over 30,000 have been abducted by the LRA, with boys forced to kill friends, family, and others, whereas girls have been forced into sexual slavery. Children have lived the majority of their lives in constant fear of being abducted or killed by the LRA. Abductees who have managed to escape the LRA have typically been feared by their families and former community members, and have faced rejection and exclusion. A cease-fire was declared, providing a safe and optimal time for research and interventions to be conducted. Nicki, Kathryn Hecht, and Peter Ralston faithfully visited Uganda over the course of 3 years. Crick, Hecht, and Ralston contributed a great deal to Uganda. They brought their knowledge of child development there and formed genuine connections with the Ugandan people. Unfortunately, Nicki did not live to see this work accomplished.

Throughout her career, Crick was passionately committed to providing exceptional training to the students in her Social Development Lab, affectionately known as “Cricksters.” Crick staunchly believed that the best approach to mentorship consisted of inspiring students to appreciate the joy and excitement inherent in the research process. To this end, Crick seized every opportunity to support her students, and she focused on fostering a compassionate, generous, and vibrant laboratory filled with laughter and camaraderie. This created a research community reminiscent of a close family; laboratory events at conferences often felt like family reunions uniting earlier and new generations of Cricksters. Crick provided an ideal context for her students to develop and grow as scholars, and her contributions live on in the many students who continue her work in research, teaching, and applied settings.

As a colleague, Nicki was always interested in the pursuit of knowledge and truth. She was generous in sharing her ideas with research colleagues around the world. Nicki worked well with people from all walks of life, collaborating with numerous community and cultural groups in the United States and beyond. It was always a fun and rewarding experience to brainstorm ideas with Nicki. She was undefensive and never exhibited premature cognitive closure to ideas that were different from her own. In ways similar to what a great athlete brings to a team, Crick strove to help make those around her better.

Crick's many contributions provide several important insights that should guide future work in the area of developmental psychopathology. For instance, Crick's research underscores the critical need to test unspoken assumptions in developmental psychopathology research; her refutation of the popular view that girls do not exhibit significant adjustment problems prior to adolescence and that borderline personality pathology does not emerge until adulthood steered the field in groundbreaking new directions. In addition, Crick combined theoretical sophistication with methodological rigor. At heart a humanitarian, Crick gravitated to research questions focused on how to promote positive adjustment among populations that were largely ignored by developmental psychopathology scientists. Her most recent program of work with child soldiers in Uganda highlights Crick's ongoing commitment to underserved populations. Crick deeply respected and honored the lessons that the Ugandan Acholi youth could teach the rest of the world, including how to live joyfully and generously in the face of trauma and adversity. Dozens of Crick's students and colleagues are continuing her important research in the areas of aggression, gender, social information processing, personality pathology, and culture. Perhaps of the most importance, Crick's legacy reminds us that the most groundbreaking and innovative developmental psychopathology research is inspired by deep caring and an unrelenting commitment to promoting the well-being of our world's youth.

The legacy of Nicki R. Crick's contributions to developmental psychopathology
×

The legacy of Nicki R. Crick's contributions to developmental psychopathology
×

The legacy of Nicki R. Crick's contributions to developmental psychopathology
×
×