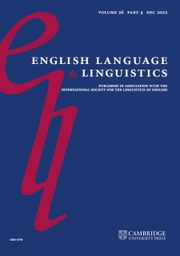 This article presents the Eighteenth-Century English Phonology Database (ECEP) in the context of historical phonology and historical corpora. The eighteenth century witnessed the proliferation of works on elocution and orthoepy and yet the field lacks searchable digital sources comparable to those available in other disciplines like historical syntax or historical pragmatics. Because of this and for other reasons such as the difficulty in deciphering idiosyncratic notation systems in the original materials, there has been a certain disregard for the study of eighteenth-century phonological evidence. The ECEP database aims to redress this absence of research material by collecting data from eighteenth-century pronouncing dictionaries in the form of IPA transcriptions (c. 1,600 different example words totalling c. 17,600 transcriptions) and supplementary metadata, with a view to facilitating systematic analyses of phonological, chronological and geographic patterns, and also normative attitudes. The richness of the contents in ECEP will thus be of interest to phonologists, dialectologists and language variationists from the historical as well as the synchronic perspective, in that eighteenth-century orthoepists laid the ground for what became ‘Received Pronunciation’. Methodologically, the compilation of the ECEP database aims to contribute to the thriving field of corpus linguistics with a new research tool for the study of the history of English.

The compilation of the ECEP database was supported by the British Academy / Leverhulme Trust (SG–132806) and the Santander Research Mobility Scheme (calls 2012/13 and 2014/15), and technical support was provided by the Humanities Research Institute at the University of Sheffield. The author would like to thank the Spanish Ministry of Economy and the European Regional Development Fund (FFI2016-77018-P) and the Autonomous Government of Galicia (ED431C 2017/50).