S-30. Symposium: New challenges to the dichotomy schizophrenia versus affective disorder — Part I 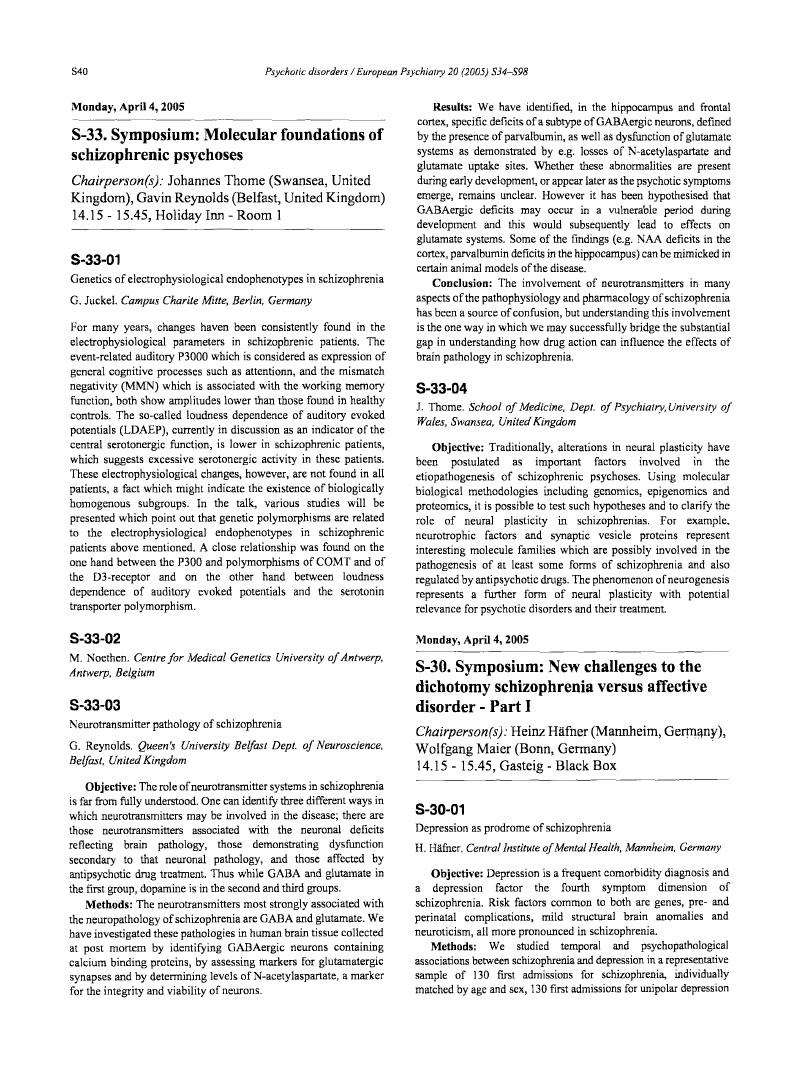 Depression as prodrome of schizophrenia

Objective: Depression is a frequent comorbidity diagnosis and a depression factor the fourth symptom dimension of schizophrenia. Risk factors common to both are genes, pre- and perinatal complications, mild structural brain anomalies and neuroticism, all more pronounced in schizophrenia.

Methods: We studied temporal and psychopathological associations between schizophrenia and depression in a representative sample of 130 first admissions for schizophrenia, individually matched by age and sex, 130 first admissions for unipolar depression and 130 healthy population controls. Early illness course, mostly drugnaive, was assessed retrospectively using the IRAOS,6-month followup was done using the PSE and other instruments.

Results: Depressed mood was the most frequent first symptom of schizophrenia. It was followed by anxiety, negative symptoms and functional impairment. With progressing illness this core syndrome increased in number and severity until the climax of the first psychotic episode, subsequently falling to a low level with remitting positive symptoms. In 333 relapse episodes assessed at 12-year follow-up of the ABC schizophrenia sample depressed mood was the most frequent symptom.

Conclusion: Considering the common neurobiological risk factors of schizophrenia and depression, the role of the depressive syndrom as a prodromal stage of schizophrenia and numerous other brain diseases we explained the depressive symptom, the most frequent mental disorder in the general population, as a genetically performed reaction pattern of the human brain. It can be triggered by a diversity of causes involving mild brain dysfunction including schizophrenia. As the dysfunction progresses transition to psychosis, in still more severe cases to delirium/confusion and dementia may occur.

Objective: It is increasingly recognised that in the general population, symptoms of mania and psychosis are more broadly distributed than their associated clinical syndromes. Little is known about how these subclinical population phenotypes co-vary with and impact on each other.

Methods: In a random population cohort of 7076 adults, prevalence of mania and psychosis symptoms were assessed at baseline, one and two years later. The degree of comorbidity between subclinical continuous mania and psychosis symptom scores was examined, and the impact of subclinical comorbidity on social impairment and prospective post-baseline prediction of incident DSM-III-R diagnosis.

Conclusion: In the general population, subclinical phenotypes of mania and psychosis are more prevalent than their clinical counterparts and cluster together frequently. Several risk factors for clinical bipolar and clinical psychotic illness may act in part by facilitating the formation of more “toxic” combinations of subclinical symptoms in the general population with higher probability & transition to clinical illness.

Prediction of psychosis by depressive symptoms among high-risk subjects

Objective: The prodrome to schizophrenia needs to be discovered rather than invented.

Methods: The Edinburgh High Risk Study of initially well young adults with at least two schizophrenic relatives started in 1994. 162 high risk subjects provided some clinical, neuropsychological and/or imaging data in the first five years and most were repeatedly assessed over up to 10 years. Symptoms were elicited with the Present State Examination (and latterly the PANSS too).

Results: Approximately one-half of the sample had isolated psychotic symptoms, some of which resolved, and 21 developed schizophrenia (on average after 944 days). At study entry, the mean level of depressive symptoms (as well as situational anxiety and nervous tension) was higher in high risk subjects who became ill than those who did not. Affective symptomatology remained high with illness onset.

Conclusion: In genetically predisposed individuals, affective symptoms and indeed psychotic symptoms are prominent before the behavioral and subjective changes which accompany the onset of schizophrenia per se.

Current status of molecular genetics of schizophrenia and bipolar disorder

Results: The high heritabilities of schizophrenia and bipolar disorder have stimulated much work aimed at identifying susceptibility genes using both positional and functional molecular genetic approaches. As a result, several strong and well-established linkages have emerged in schizophrenia. Three of the bestsupported regions are 6p24-22, Iq21-22 and 13q32-34 where single studies have achieved genome-wide significance at P<0.05 and suggestive positive findings have also been reported in other samples. Other promising regions include 8p21-22, 6q21-25, 22q11-12, 5q21-q33, 10p15-p11 and Iq42. Substantially fewer families have been studied to date in bipolar disorder and the linkage findings are less consistent hut several genomic regions of interest have been identified including 6q16-q21, 12q24 and regions of 9p, 10q, 14q, 13q, 22q and chromosome 18. Recently, evidence implicating specific genes or loci has been reported for both disorders and, crucially, replicated. Currently, the weight of evidence supports NRG1 and DTNBP1 as schizophrenia susceptibility loci, though work remains before we understand precisely how genetic variation at each locus confers susceptibility and protection. The evidence for COMT, DISC1, DAOA(G72) and DAO is promising. For bipolar disorder the strongest evidence supports BDNF and DAOA(G72)/G30. While it is essential that further replications are established, the respective contributions of each gene, relationships with aspects of the phenotype and the biological mechanisms all need investigation. There is increasing evidence for an overlap in genetic susceptibility across the traditional Kraepelinian dichotomy- most notably with association findings at G72(DAOA)/G30, DISC1 and NRG1. As functional psychosis susceptibility genes are identified over the next few years, this will have a major impact on our understanding of disease pathophysiology and nosology. This presentation will give an overview of the current state of knowledge and the directions in which the field is moving.

No Comments have been published for this article.

S-30. Symposium: New challenges to the dichotomy schizophrenia versus affective disorder — Part I
×

S-30. Symposium: New challenges to the dichotomy schizophrenia versus affective disorder — Part I
×

S-30. Symposium: New challenges to the dichotomy schizophrenia versus affective disorder — Part I
×
×