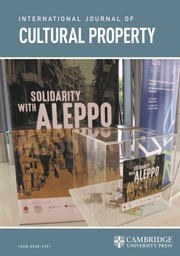 The ethics of art dealing

The ethics of dealing in antiquities may be discussed in two parts: first, the ethical standards that govern the trade and its relation to clients, and second, the new legal standards that affect dealers and collectors arising from political ambitions in the international relations between source and market nations. Friction between these competing interests began with the ratification of the UNESCO Convention in 1972 and the passage of the Cultural Property Implementation Act in 1983. Unrealistic political approaches to the illicit trade in antiquities have exacerbated rather than solved the problem. A resolution of the conflicts, contradictions, and ambiguities of the present situation can be achieved by stressing the safety of objects and archaeological sites over partisan goals. A satisfactory denouement can be achieved through a partnership between source countries and the market, through an abandonment of retentionist export controls, and through the establishment of an open, free, and rational coalition. Any solution to present difficulties ought to acknowledge the value of continuing to collect and preserve antiquities in private and public collections.

The ethics of art dealing
×

The ethics of art dealing
×

The ethics of art dealing
×
×