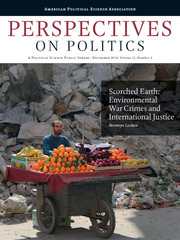 Cover Art: Aleppo, Syria (February 24, 2014). A fruit vendor waits for customers next to a damaged building in the Shaar neighborhood of the northern city of Aleppo. More than 140,000 people are stimated to have been killed in Syria’s nearly three-year war, and millions more have been forced to flee their homes. (MOHAMMED AL-KHATIEB/AFP/Getty Images)