PUBLIC POLICY, HIGHER EDUCATION, AND INCOME INEQUALITY IN THE UNITED STATES: HAVE WE REACHED DIMINISHING RETURNS? 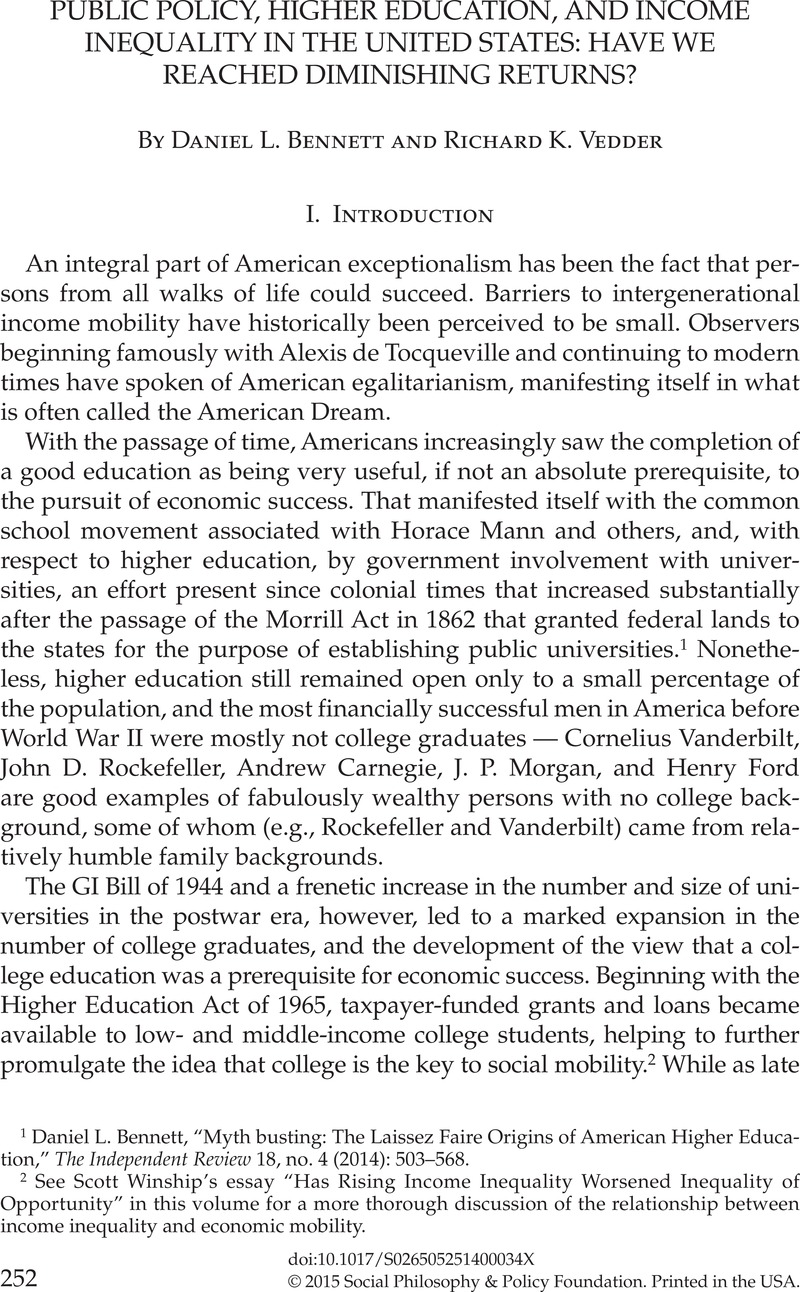 2 See Scott Winship’s essay “Has Rising Income Inequality Worsened Inequality of Opportunity” in this volume for a more thorough discussion of the relationship between income inequality and economic mobility.

9 For a review of this literature, see Acemoglu, Daron, “Technical change, inequality, and the labor market,” Journal of Economic Literature 40 (2002): 7–72.CrossRefGoogle Scholar

11 Krugman, Paul, “And Now for Something Completely Different: An Alternative Model of Trade, Education, and Inequality,” in Feenstra, R. C., ed., The Impact of International Trade on Wages (Chicago: University of Chicago Press, 2000), 16.Google Scholar

14 Paul Krugman, “And Now for Something Completely Different,” 28.

17 Robinson, Sherman, “A Note on the U Hypothesis Relating Income Inequality and Economic Development,” American Economic Review 66, no. 3 (1976): 437–40.Google Scholar

25 Babcock, Philip S. and Marks, Mindy, “The Falling Time Cost of College: Evidence from Half a Century of Time Use Data,” Review of Economics and Statistics 93, no. 2 (2011): 468–78.CrossRefGoogle Scholar

35 We use 2004 in lieu of 2010 as the end period here due to data availability. State level inequality data are not available prior to 1970.

36 N, T and K are the number of states, time periods and independent variables, respectively.

39 One interpretation of the result from column 2 of Table 2 is that the relationship between inequality and attainment is exponential. This is potentially misleading however. A rejection of the null hypothesis that the coefficient on the linear college term equals zero does not preclude that there is in fact no relationship, particularly when the model may be misspecified. Column 2 does not include any additional covariates that likely impact the income distribution. As such, the coefficient estimates likely suffer from omitted variable bias. It is nonetheless worth retaining in the results for comparative purposes.

40 We estimate this rate when both the linear and quadratic college terms are statistically significant. For instance, college* is 0.23 in column 6 for the specification spanning the period 1970–2004. The average state attainment rate over the 35-year period is greater than 23 percent in four states — Colorado, Connecticut, Maryland and Massachusetts. College* is 0.23 and 0.24 in columns 9 and 10 for the 1970–1984 and 1985–2004 periods, respectively. None of the states has an average attainment rate greater than 23 percent over the 1970–1984 period, but fifteen states (Alaska, California, Colorado, Connecticut, Hawaii, Maryland, Massachusetts, Minnesota, New Hampshire, New York, Utah, Vermont, Virginia, Washington) have an average attainment rate above 24 percent for the 1985–2004 period.

44 For more information on various inequality measures and their properties, see Bennett, Daniel L. “The Concept and Measurement of Economic Inequality,” in Essays on Institutions, Economic Development, and Inequality, Electronic Theses, Treatises, and Dissertations Paper 8728 (2014).

49 The BLS data were collected from the annual Statistical Abstract of the United States reports.

50 BLS reported a national female LFPR figure for 1970 that differed significantly from the Census ratio. As such, the BLS data are used for the 1971–2010 period, but the national rate for 1970 is from the Census of the Population.

53 BLS is the original source of the data. The figures are reported monthly. An arithmetic average of the monthly figures is used as the annual rate.

54 Population density was used as an alternative to urbanization. Doing so does not substantially change the results.

PUBLIC POLICY, HIGHER EDUCATION, AND INCOME INEQUALITY IN THE UNITED STATES: HAVE WE REACHED DIMINISHING RETURNS?
×

PUBLIC POLICY, HIGHER EDUCATION, AND INCOME INEQUALITY IN THE UNITED STATES: HAVE WE REACHED DIMINISHING RETURNS?
×

PUBLIC POLICY, HIGHER EDUCATION, AND INCOME INEQUALITY IN THE UNITED STATES: HAVE WE REACHED DIMINISHING RETURNS?
×
×