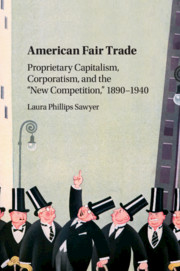 Rather than viewing the history of American capitalism as the unassailable ascent of large-scale corporations and free competition, American Fair Trade argues that trade associations of independent proprietors lobbied and litigated to reshape competition policy to their benefit. At the turn of the twentieth century, this widespread fair trade movement borrowed from progressive law and economics, demonstrating a persistent concern with market fairness - not only fair prices for consumers but also fair competition among businesses. Proponents of fair trade collaborated with regulators to create codes of fair competition and influenced the administrative state's public-private approach to market regulation. New Deal partnerships in planning borrowed from those efforts to manage competitive markets, yet ultimately discredited the fair trade model by mandating economy-wide trade rules that sharply reduced competition. Laura Phillips Sawyer analyzes how these efforts to reconcile the American tradition of a well-regulated society with the legacy of Gilded Age of laissez-faire capitalism produced the modern American regulatory state.

'From Walton Hamilton and Milton Handler to Ellis Hawley and Herbert Hovenkamp, the very best legal and economic scholars have insisted upon the centrality of the law of unfair trade to the history of modern American capitalism. Laura Phillips Sawyer's American Fair Trade reanimates that entire tradition by demonstrating in superb and convincing detail the formative role of fair competition and trade associations in the development of the distinctive forms of public-private governance, administrative law, and economic regulation at the heart of both American capitalism and the modern American state.'

'What is fair trade? In this lucid, well-informed, carefully researched, and unfailingly judicious book, Laura Phillips Sawyer provides a boldly revisionist perspective on a historical perennial. In so doing, she joins the growing chorus of historians, lawmakers, businesspeople, and activists who are re-envisioning the antimonopoly tradition for the digital age.'

'American Fair Trade is destined to become a monument in the history of competition policy in the United States. Not only is Professor Sawyer an excellent writer, she is also a skilled integrator of political, economic, legal, and other historical ideas. No one has done a better job of identifying the political, social, and economic conflicts that gave rise to the fair trade movement, explain the resistance to it and the responses in the federal courts, and tell a coherent and believable story about why it finally collapsed. This is intellectual and business history at its very best.'

'A timely and powerful history, this book joins a growing body of work to bring the anti-monopoly tradition out of the wilderness back to the center of American debate. By tracing the fair trade movement from its roots in nineteenth century antitrust into the modern trade association and feminist consumer movements, Laura Phillips Sawyer unearths vital resources to better reconcile equality, efficiency, and democracy in the twenty-first century.'

Gerald Berk - author of Louis D. Brandeis and the Making of Regulated Competition

'The analysis is thorough, painstakingly footnoted, and strong on legal aspects. It breaks important ground and has few peers … Recommended for graduate students through professionals.'

'This is a fine work of legal history and business history, and it makes an important contribution to the literature on this formative period in the development of the American regulatory state.'